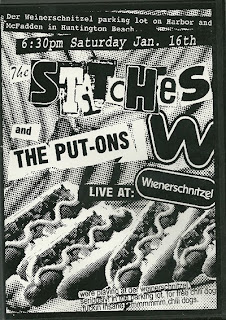 The Stitches formed in 1994 in Orange County and  unique brand was one of the mainstays of the thriving skatepunk scene in 1990s Orange County. The band consists of singer Mike Lohrman, guitarist Johnny Witmer, bass player Pete Archer and drummer Craig “Skibs” Barker. The Stitches have been around since 1994, releasing several singles and EPs , two full-length albums (less is more!), and playing gigs for their loyal following around SoCal, along with occasional U.S. and European tours. The band’s live shows tend towards bona-fide punk rowdiness, with mosh pits, stage diving and the obligatory fight between audience members.
The DVD menu page is, appropriately enough, a Der Weinerschnitzel drive - through menu.  You can choose to view either concert only or the show footage with highlights of the crowd in the parking lot, which includes a kid with an elaborate green Mohawk and a Mom with little punk outfitted tots. The show footage begins with singer Mike Lohrman walks out with a Der Weinerschnitzel bag over his head. (Shades of the Unknown Comic?) After his intro, the bag disappears, and the band veers into a lighting-fast set. Then the chili dogs start flying - from the crowd onto the band and vice versa. It's not an ongoing barrage, but just enough for things to get a bit messy.  The show clocks in at 28 minutes and 43 seconds, including encores. But the Stitches put out more energy in that short set than some bands that play twice as long. The band segues through Cars of Today, Electroshock Carol, Pick Me Up and other songs from their second album, 12 Imaginary Inches and crowd favorites like My Baby Hates Me and a cover of That Woman’s Got Me Drinking, the Shane MacGowan and the Popes classic, from the manic debut 8 X 12. This is one of the Stitches best shows, and that's saying something cause they are all pretty damn good.
The "home-style" video footage really gives the viewer a sense of “being there.” Cameras need to go out of focus occasionally to get that feeling of being in the pit or at least near it. You need jittery close-ups of the cups on the ground and a close-up of the street sign hanging from the light pole. This slice-of-life approach really works for such a fun event.
I also like how the camera from behind and focuses on the kids as much as the band. This typifies another interesting SoCal trait, where you find a lot of young kids with old-school punk Mohawks. Now you know their parents probably spent time at the Masque (or lesser known punk clubs) and helped give them fashion pointers.
Posted by JadeB at 12:36 PM No comments: