You Can't Get It on DVD - Light of Day 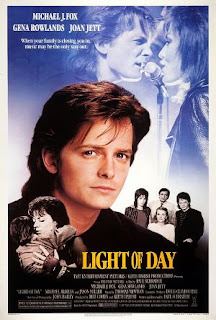 Light of Day combines the unlikely bedfellows of family drama and a struggling bar band with poignant but occasionally melodramatic results. Written and directed by Paul Schrader, this 1987 film starred Michael J. Fox and Joan Jett as siblings battling to keep their family - and their band - from falling apart.

Joe Rasnick (Michael J. Fox) and a few of his bandmates ( including Bu Montgomery, played by Michael McKean) work in a factory during the day  and play in local bars at night for the love of rock ‘n’ roll. Joe’s sister Patti sings and plays guitar by night, and is a single Mom raising her son Benji (Billy Sullivan) when she’s not playing music. Jeanette Rasnick (Gena Rowlands) , Patti and Joe’s mother, rules over the family in a passive-aggressive way, although she makes no secret of her disdain for Patti.

Films about rock bands usually mean drugs, sex, booze, fighting, general decadence and the resulting fallout, but the bar band portrayed in Light of Day has to deal with  less glamorous situations.  They travel in a van, stay in cheap motels and steal food to survive on the road.

The world Light of Day depicts is all too real, from the dives the Barbusters play to the small, ranch-style house that serves as the setting for all the family drama. Patti’s the family black sheep while Joe is the peacemaker. Joe is a loving uncle to Benji while Patti goes on tour with a metal band called the Hunzz. Patti’s impassioned speech to Joe about living for music, about the nitty-gritty of performing music for the love of it, exposes music as her motivation - and her escape from family turmoil.  The camaraderie between Fox and Jett is believable; yes you’d buy them as a brother and sister act.. This film was made in the midst of  the popularity of Family Ties and Back to the Future, and it was fashionable for  hipsters of the time to bash Michael J. Fox for trying serious roles, but he was quite good in this film, Bright Lights, Big City and Causalities of War.

Jeanette’s health deteriorates; she and Patti have their final meeting in a hospital room. Jett holds her own in an emotional performance playing off seasoned actress Rowlands. It makes you wonder how she would have fared in other demanding acting roles.

There’s a blink and you’ll miss it performance by Trent Reznor  as a member of a fictional local band. Trent was in a real Cleveland band called the Exotic Birds at the time. Jason Miller appears in a few scenes as Patti and Joe’s dad, Benjamin, a quiet man who has long acquiesced family reigns to his strong-willed wife.

If you want gritty, depressing rock ‘n’ roll unreality, try Hardcore Logo. Light of Day is an authentic story of two mutually exclusive worlds – family and rock ‘n’ roll - that mix well in Schrader’s script and the performances of Rowlands and its two young stars.

Schrader didn’t seem to think Jett fit in with the rest of the cast..In a quote from the book Schrader on Schrader and Other Writings, the auteur notes that “although she gave a good performance, Jett’s casting …”did not work.” It’s interesting to note that Schrader is said to have renounced Blue Collar, another one of his directorial efforts that’s currently unavailable on DVD.