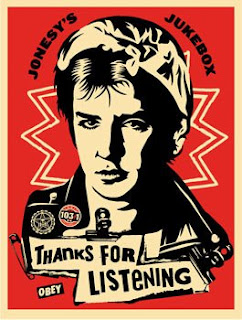 Artwork by Shepard Fairey thegiant.org
It’s going on 2 weeks now since Indie1031 and Jonesy's Jukebox went off the air, and I automatically glance at the clock at 12 bells. I mean 12 noon. And feel a wave of nostalgic sadness washes over me. In December 2003, I received a voicemail message from my boyfriend. Only his voice wasn’t on it. His cell, instead, was picking up something off the car radio. The recording was staticy and jumbled, and I could understand only bits and pieces. I pressed the cell phone against my ear. It was an English blokes singing something about “Don’t be a mug” Wait! It sounds like Jonesy, I thought…no, it can’t be! He’s doing a radio show on this new station? I’d been a Pistols fan since high school, with a special affection for Jonesy. I even had his two solo CDs. I was ecstatic! A few of my friends had waxed rhapsodic about hearing the Ramones and the Sex Pistols on 1031 frequency, so I turned on the radio. Now for an old person, this was unbelievable. In the 70s and 80s you couldn’t hear punk like the Pistols or X, much less Black Flag, except on college stations or once a week specialty shows on mainstream radio. Yeah, you could always listen to your CDs or the punk radio station on AOL, but listening to real punk on a terrestrial radio station while driving to work--NEVER! So, in Jan. 2004, Indie had no DJs or shows. Jonesy’s first show was only an hour, then expanded to 2 hours. He sounded so nervous on the first show and couldn’t really pronounce three properly--it sounded like “free". As time went on, of course, Jonesy evolved from a lovable bumbling bloke to the Pontiff, holding forth about life, love, and nonsense. He played Sweet songs other than Little Willy, novelty records by Diana Dors, and long-forgotten artists like Jobriath. I almost fell off my chair during every other song those first weeks. Soon after, he started interviewing people, initially only on Fridays. Jonesy’s interviews went against everything you ever learned in journalism school, and that’s why they were so funny and memorable. Ian Astbury was his first guest, and then he interviewed everyone from Vidal Sassoon to Lemmy, Shepard Fairey to old bandmates John Lydon and Paul Cook, Owen Wilson to C.C. Deville of Poison. Jonesy’s hysterical bits about nothing in particular were legion. “Did you ever think about not thinkin’?” he pondered philosophically one day. Somebody needs to compile a webpage and/or audio compilation of Jonesy’s words of wisdom. After e-mailing friends about the show daily, I finally relented and devoted a Jonesy webpage to daily reports from June 2004 to April 2006. Likewise, Stuart’s Jonesy blog continued til the show’s final days. Also, Chris and transcriber Floratina kept track of the shows at the Alternative Jukebox Jive Blog. Other celebrity DJs followed Jonesy’s lead. We had Camp Freddy on Saturday nights, led by Dave Navarro and Billy Morrison, and Henry Rollins’ Harmony in my Head. Henry being Henry, he talked as much as he played music. And his verbal sparring with assistant Heidi May was beyond hilarious. Some days, I spent every waking moment with Indie in the background and could barely get any work done, it was so interesting and distracting. What song would they play next? What celebrity would show up on Jonesy’s Jukebox or Camp Freddy? Pamela Des Barres hosted a Valentine’s Day show one year. Fabled A & R guy John Kalodner had a show for a few weeks. I woke up Sundays with Watusi Rodeo and went to bed with The Suicide Girls (well, not literally! Get your mind outta the gutter!) with Mr. Shovel’s Check One Two sandwiched in between. Aaah, memories. I won tickets to the first Indie concert at the Avalon from the station’s metal show before Jackie hosted it. The porn star who was co-hosting with the original DJs answered the phone when I called. Having a porn star on a metal show was the big thing in 2004-2006. As time went on, the shows evolved--or devolved-- and lost some of their sparkle. Maybe the novelty just wore off. It got to the point where there were too many specialty shows. Did we really need a mash-up show? Indie was too good to keep to myself, so I found people who loved it as much as I did. I discovered the infamous blog on the Indie site in 2005, and the Indie Yahoo Group. Later, some Jonesy’s Jukebox devotees formed a MySpace group called the Blogstars. There were outings to see The Filth and the Fury at the John Anson Ford Amphitheatre, Camp Freddy at the Key Club and other Indie sponsored shows. I have so many more Indie inspired stories and memories, but I’ll leave it at that or I’ll be typing all night. But as George Harrison sang, all things must pass, and the radio station I knew and loved succumbed to the corporate meanderings it once railed against. Now, it’s a Spanish language station “El Gato”. I tuned in one day. It sounded like Mexican polka music. Very sad. I shut the radio off and put on a B-52s CD instead. Indie remains online, sort of, playing the same mix of late ‘70s/early 80s punk they did at the beginning of their run. Some of the DJs have agreed to continue their weekly shows online, according to the revamped Indie website. Jonesy’s not among them. But it’s just not the same. Entravision and the ratings police just broke up that old gang of mine. More on the demise of Indie 1031-- LA Weekly Hitfix.com Indie Online
Posted by JadeB at 10:05 AM 2 comments: