How Sassy Changed My Life: A Love Letter To The Greatest Teen Magazine Of All Time 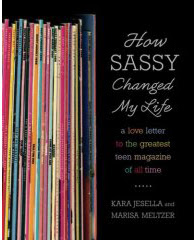 How Sassy Changed My Life: A Love Letter To The Greatest Teen Magazine Of All Time
By Kara Jesella and Marisa Meltzer
Faber And Faber, Inc.
Paperback, $18.00

The WWW was still a glow in computer geeks’ eyes, and Teen, YM and Seventeen were the mags of choice for American girls in the late 1980s.Long after the rise of feminism and the sexual revolution, even several years after Madonna had exposed her belly and bangles for girls to emulate, mags for young women still focused on diets, prom dresses, and recipes, not the reality of everyday teen life in America.

Enter Sassy. Sandra Yates founded the magazine as an Americanized version of the much raunchier Australian teen mag Dolly. Jane Pratt, a 24 year old North Carolina native, became Sassy’s first editor, and along with staff members like Christina Kelly, Margie Ingall and Catherine Gysin, created the most infamous and influential teen magazine ever. Writing in their own distinct, first-person voices, Sassy writers connected with their teen-age audience Staid journalism school reportage and glib PR exercises filled with exclamation points had no place in Sassy’s pages. The magazine featured articles and reader letters about subjects such as homosexuality, incest, safe sex and abortion, and dared to include models who weren’t corn-fed and squeaky-clean.

That might all seem run of the mill now, but consider this. Sassy debuted in 1988, the year in which clean-cut mall chicks Debbie Gibson and Tiffany shared the charts with brain dead, groupie-banging metalers like Poison and Motley Crue. Movies like Rain Man, Big, and Scrooged were box office hits, and underground artists and funky, creative high school kids endured hard times and ridicule, not instant Internet fame.

Authors Marisa Meltzer and Kara Jesella chronicle the rise and fall of Sassy in How Sassy Changed My Life: A Love Letter To The Greatest Teen Magazine Of All Time.”
Meltzer and Jesella are among the young women who grew up with Sassy and revere the magazine to this very day. In this meticulous but not overwhelming history, they interview former staffers, readers and even some of the celebrities who graced the ground-breaking mag’s covers and articles. Despite their obvious admiration for “the greatest teen magazine of all time”, the authors cover the in-fighting and negative aspects of Sassy’s reign as well as the pajama party hijinx. 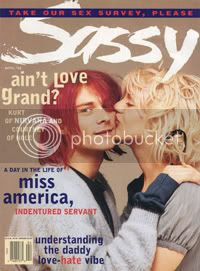 In the late ‘80s and early ‘90s, Sassy, along with Spy, exemplified the nascent trend of the snarky celebrity put-down that is lovingly taken to the extreme today by web sites like Gawker and Defamer. Even Pratt’s successive magazine, Jane, kowtows to the bland celebrities that Sassy dismissed. Christina Kelly was infamous for articles that pondered the appeal of “bands” like New Kids On The Block or exposed TV starlets like Tiffani Amber Thiessen as airheads. The latter interview prompted an angry letter from the actress’ publicist. Notice this 1989 quote from Christina:

“What is wrong with our society that we elevate sleazoids to celebrity status, take their opinions seriously, and make them rich?”

*Sigh.* Some trends are as all-consuming in 2007 as they were in 1989. Sassy’s well… sassy railing against dumb celebrities didn’t put it out of business, but mainstream pundits threatened to destroy the magazine. Right wing curmudgeons almost put the mag out of business by urging advertisers to boycott because of the magazine’s many sexually frank articles. Meltzer and Jesella explore the constant battles Sassy waged with the religious right, mainstream America, and even some of their own sales reps and publishers.

Meeting the fate of so many other magazines, Sassy was eventually sold by Lang Communications to Peterson Publishing, which proceeded to drive the mag into obscurity, and it folded in 1996. Some things aren’t meant to last. They are too unique, too indicative of a certain time and mind-set which is forever lost. Sassy was one of those things.

Luckily, we now have the Sassy-influenced Bust, Bitch and Venus Magazine to speak for independent, feisty girls and young women. More of today’s teen-age girls need to embrace these magazines the same way girls in the 80s and early 90s embraced Sassy. Many social stigmas have vaporized for young women since Sassy’s debut, but other pressures and barriers, like political correctness and the vapid Girls Gone Wild culture have replaced them.