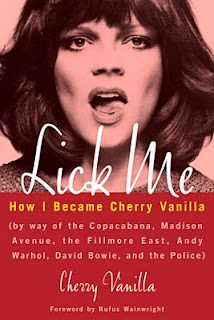 Although not as well-known as her more mainstream contemporaries Pamela Des Barres and Cynthia Plaster Caster, Cherry Vanilla (born Kathleen Anne Dorritie) was arguably the most brazen and the most cerebral groupie of the swinging late ‘60s/’70s. Based on her chapter in Pamela Des Barres’ groupie round-up, Let’s Spend The Night Together, Chicago Review Press offered Cherry her own book contract and the result is Lick Me: How I Became Cherry Vanilla (by Way of the Copacabana, Madison Avenue, the Fillmore East, Andy Warhol, David Bowie and the Police) This raunchy and refreshingly honest memoir takes readers on a wild ride through two decades of hedonistic New York, from hippie happenings in Central Park to the punk clubs of Manhattan.

It wasn’t long before Cherry took advantage of the burgeoning Lower Manhattan club scene, working as a DJ and mingling with models, actors, royalty and the Andy Warhol crowd. She starred in Warhol’s play Pork, appearing nude onstage in the British production. In between acting and DJing, she had flings with musicians Leon Russell, Kris Kristofferson, Burton Cummings of the Guess Who, and Shawn Phillips, who wrote two songs about her. Cherry’s most famous conquest, though, was David Bowie.

As his publicist and a major behind the scenes presence at MainMan Productions, the infamous glam-rock artist management company, she was instrumental in bringing Bowie and his music to the States. She was friends and business associates with him, first and foremost. However, when he finally suggested, “Come on, let’s go to bed,” Cherry followed through, despite having bandages on her thighs to cover carbuncles from bug bites. A potentially embarrassing situation became a fun, romantic romp. 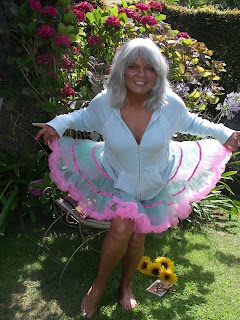 Cherry was Bowie’s PR person til MainMan was disbanded in 1974. Undaunted, Cherry entered the next phase of her career-as a solo artist for RCA records. She toured England with then unknown back-up musicians - Stewart Copeland and Sting - from a band called the Police. Her outrageous stage persona garnered her some scathing reviews in England, but her two albums, Bad Girl and Venus d’ Vinyl, have retained a cult following to this day. After she was dropped from RCA Records, Cherry hit hard times, and was even homeless for awhile. Now she lives in Hollywood and works for the composer Vangelis, still feisty as ever at 67.

Cherry Vanilla’s exploits are fun-and somewhat exhausting (in a good way) to read. Was there anything this woman didn’t do? Groupie, poet, publicist, journalist, fashion icon, Warhol protégé and actress, ad agency exec and sexual provocateur, it’s surprising that Cherry Vanilla’s story fits into a mere 288-page book! The memoir isn’t all fun and titillation, however, as Cherry frankly discusses her battles with OCD, near disasters with bad drugs and bad men (including one harrowing encounter with a creepy sadist), abortions and sexual addiction.

Lick Me is a rollicking visit back to the days when the whole creative “counterculture” seemed to coalesce into a few miles in Manhattan (and London). It’s a great memory-jogger for kids who came of age reading Creem and watching the 1980 Floor Show on the Midnight Special.

Read more: http://blogcritics.org/books/article/book-review-lick-me-how-i/#ixzz1D98ZX4YC
Posted by JadeB at 7:53 PM No comments: