Book Review: Surviving Agent Orange: And Other Things I Learned From Being Thrown Under the Partridge Family Bus By Gretchen Bonaduce 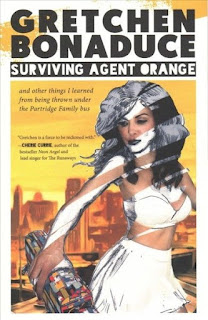 Surviving Agent Orange: And Other Things I Learned From Being Thrown Under the Partridge Family Bus
by Gretchen Bonaduce
Rare Bird Books,  264 pages

Most people recognize Gretchen Bonaduce from the reality series “Breaking Bonaduce” with her ex-husband, ex-child star, and current DJ Danny Bonaduce. Her new book, Surviving Agent Orange: And Other Things I Learned From Being Thrown Under the Partridge Family Bus summarizes the good, the bad and the ugly from her 16 year long marriage to the erratic redhead.

Gretchen met Danny when she was a promotions assistant for one of the guests on his radio show in . A day (or so) later, they were married in a civil ceremony. They toasted their new life together with champagne from a local 7-11.

Shortly after the wedding, Danny managed to encounter and assault a tranny prostitute.  Well, Gretchen stayed with Danny even after this snafu. It didn’t take long, however, before Danny’s crack addiction became evident (Pieces of aluminum foil started appearing around the house, for example). And we all know the trail of shenanigans that followed until the couple divorced in 2007.

Why did Gretchen stick with Danny so long? (Remember, he was always an on-again, off-again pain in the ass with everyone.) Gretchen admits that she always seemed to attract men who were fixer-uppers, and Danny was the most challenging fixer-upper of all.

A few people I know refused to read this book because it has a suspicious subtitle  “And Other Things I Learned From Being Thrown Under the Partridge Family Bus”,  but would anyone read the book if  it had a boring title like” My Life with Danny Partridge?”

The author’s self-deprecating humor and earthy take on life can be refreshing. She writes about a TV director who critiqued her acting ability by saying,“That was the most unnatural walking through the door I’ve ever seen.”

There are bits in the book about Gretchen’s pre and post Danny life, and some of them are pretty funny, too. She had a stint as a bar band singer and worked a day job at a Pizza Hut between gigs. There’s also a heartbreaking bit about an ex-roommate whose life spiraled out of control, and a section about Gretchen’s early life as an Army Brat.

It’s been almost a decade since the chaos of Breaking Bonaduce and the divorce, and both Danny and Gretchen are doing pretty well.  Danny has remarried and has a radio show in . Gretchen is the singer for a 1980s cover band, Fatal 80s, and has worked on several reality TV shows and pilots.

Bonaduce’s writing style is stream of consciousness, like conversing with a friend who has lots of funny stories and can’t wait to tell you all of them. The book doesn’t have a straightforward chronological framework and skips around occasionally. Some readers may find this casual style disconcerting.

Another reality show star, former “Top Model” Adrianne Curry wrote the introduction.  She refers to Gretchen as the “Mother Teresa of ” and credits her with helping her through her divorce from her first husband, Brady Bunch actor Christopher Knight. (Curry left showbiz and now lives in with her second husband, voiceover artist Matthew Rhode.)

Despite the sub-title, Surviving Agent Orange is no hatchet job. It’s pretty even-keeled, and alternates between complimenting Danny’s good points and exposing his devious side. Danny often credited Gretchen with putting him on the road to redemption, both on-air and in his 2001 autobiography,  Random Acts of Badness.

For its honesty and humor,  Surviving Agent Orange: is a fun read for anyone who is curious about Danny Bonaduce, the Partridge Family, wacky B-list celebrities, or any dispatches from the outer edge of pop culture .