Billie Holiday, Sarah Vaughn, and Ella Fitzgerald have outlasted all other female jazz singers in the pantheon of musical consciousness. Ella was famous for her scat singing. Billie had heartache down, exhibiting intense pain and longing in her delivery,while Sarah Vaughn had a smooth mainstream appeal, even garnering a pop hit with “Brokenhearted Melody”.

Most other female jazz singers are known only to hardcore jazz aficionados. Some of them turned into pop punchlines, like Martha Raye. But there was one pure survivor of the jazz life, Anita O’ Day. And her story is chronicled in the documentary Anita O’ Day-The Life of a Jazz Singer. This 92 minute film by Robbie Cavolina (O’Day’s manager at the time of her death), and Ian McCrudden examine O’Day’s career, which spanned six decades. Full of performance clips and interviews with jazz experts, O’Day's friends, and her peers, the film reveals a real tough cookie, a feisty character the viewer can like even if “Cowboy Bebop” is the only bebop you ever heard of before watching this documentary.

O’ Day, a perky Chicago-girl with lots of freckles and no uvula (due to a botched childhood tonsillectomy), rose from making money in walkathons as a teen, to becoming a jazz singer performing with the likes of Gene Krupa, Stan Kenton, and Duke Ellington. She was playful, coquettish and a bit bossy, in one clip from a TV show she directs the musicians into a trio for an improvised version of “Let’s Fall in Love.” She was arrested for marijuana possession and did jail time, and this branded her the Jezebel of Jazz. Anita was no coy songstress. Her forte was bebop, swing and improvisation, she was about the rhythm baby. O’ Day called herself a song stylist, improvising and using lots of quick eighth notes in her renditions.

Her first popular song, performed with Krupa's orchestra, was the novelty “Let Me Off Uptown”. It broke racial taboos, when she bantered onstage with African-American trumpet player Roy Eldridge. The effervescent O’Day held her own onstage with Eldridge, and Eldridge would later grumble “she's upstaging me!" Given the racial climate of the times, this was a bold move, and the pair had to sneak out of some theatres in the South.

The documentary interviewees, which include director John Cameron Mitchell, are in awe of her talent, sure, but on the flip-side, there’s an ex-manager who says O'Day was paid $2500 week for non-stop touring at one point and saved not a penny. Where did the money go? “(The money) went into her right arm, her left arm and for the care and maintenance of (drummer and companion) John Poole” says the manager. The longest relationship in her life was with aforementioned drummer John Poole, who introduced her to heroin.

But she wasn't a tragic figure like Billie Holiday, or an unapologetic hedonist; rather, O’ Day just seemed to fall into addiction by mistake and stay there for almost 20 years, but it proved barely a glitch in her day-to-day career. There were no long respites in rehab; she just kept performing. And it didn’t affect her shows. O’ Days most heralded performance is documented in the film Jazz on a Summer’s Day. Looking demure in a wide-brimmed hat, black and white dress, opera gloves, glass slippers, she sang "Sweet Georgia Brown" and "Tea for Two" while high on heroin. It didn’t harm her performance though.

Anita O’ Day kept singing, recording and touring, despite alcoholism, heroin addiction, backstage rape, abortion and nearly every other part of the jazz life. O' Day finally kicked heroin in 1969. In the early ‘80s, Anita, now a pant-suits wearing woman in her early 60s, appeared on the talk show circuit to pitch her autobiography High Times, Hard Times. When astonished interviewer Bryant Gumbel recites the long list of her sordid experiences, she responds, “But that’s the way it went down, Bryant”. O’ Day was an existentialist, for sure. She has that feisty attitude right down to the interview clips filmed shortly before her death in 2006.

O' Day even made a comeback in her 80s, singing to young fans at Manhattan’s Iridium Jazz Club and touring Europe. There are clips from her last tour, in 2004, shots from the recording of her 2006 album Indestructible. O’ Day remained quite an endearing character in spite of her drug addiction and all her poor life choices. It was a long, tough journey from Jezebel of Jazz to the spunky old lady playing the horses at Santa Anita, but O’Day survived the jazz life to live to a ripe old age, unlike many of her contemporaries.

The film includes 90 minutes of extras, including full musical performances and full interviews with O’ Day and others. The documentary itself is somewhat scattered, jumping from partial musical clip to interview to montage and back again. You sometimes get the feeling there was so much raw material to work with that the director didn’t know what (or when) to edit. The DVD includes a 32 page booklet with a chapter from Anita’s autobiography High Times, Hard Times, and essays by James Gavin (Chet Baker’s biographer) and Wall Street Journal jazz critic Will Friedwald. 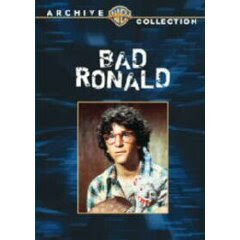 In the 1970s, particularly the halcyon years 1971-1975, many made-for-TV movies attained mythical status among kids and teenagers. The grindcore salaciousness of drive-in movies couldn’t be replicated on the small screen, so a blood- and boob-free version of B movies hit such venues as the ABC Movie of the Week. They dealt with serious issues like runaways and the generation gap (Maybe I’ll Come Home In the Spring with Sally Field), reform school (the infamous Born Innocent with Linda Blair), or devil/horror fantasies like rampaging Zuni fetish dolls (Trilogy of Terror starring Karen Black). Through the years, these made-for-TV quickies have gained popularity, even with the younger generation who’ve only heard of the films and never seen them. There’s even a Facebook application called Made for TV Mayhem.

In Bad Ronald (available from the Warner Brothers Archive Collection), B-movie favorite Scott Jacoby plays the title character, a geeky kid who lives with his bossy, doting Mom (Kim Hunter playing an understated version of Mama Bates). Ronald has the hots for a neighbor girl, but she prefers football players, and consistently spurns his requests for a date. He encounters one of her sisters and accidentally kills her after she insults his Mommy. In a panic, he buries the body, then runs home to Mom for advice on what to do next. Mom and Ronald fashion a hidden compartment from a second bathroom. Mom keeps watch over Ronald, bringing him meals, insisting that he exercise, and encouraging him to pursue his artwork. Ronald draws figures from a fantasy world he calls “Atranta”, weaving complex storylines about maidens and warriors.
Mom goes off for a gall bladder operation. She says she'll be back in a week. She doesn't make it. The next voice Ronald hears is that of real estate salespeople getting ready to sell the house. Soon they show prospective buyer Mr. Wood (Dabney Coleman) the house, along with his wife and three daughters. They all love it, except for one suspicious daughter. She finally relents to her parents and siblings and reluctantly agrees to go along with the purchase.

Now the fun begins. Ronald takes to peeping on the girls. Of course, there are realism problems, such as “How could they miss the flushing of the toilet in the hidden bathroom?” and “How does he take showers?” (watching a made for TV movie requires one to suspend disbelief for 90 minutes). The premise keeps things creepy; just thinking about a gawky, disheveled murderer hidden behind the walls of your house is unsettling.
Younger viewers used to a faster and bloodier pace in horror films might wonder what the fuss was about because Bad Ronald is merely tense and the momentum builds up slowly. There’s the snooping neighbor lady who is always peering through the back door window at the right time, and the progression (or is it regression?) of Ronald’s fantasy figure artwork to foreshadow the film's ending. Ronald has created a psychotic Lord of the Rings-type plot featuring the girls in the house, their suitors, and his macabre revenge fantasies.

Entertaining but a little dated, Bad Ronald has a medium “ick” factor that will keep you watching despite its flaws. Jacoby and Kim Hunter are psychotic but not overtly so, and the ‘70s furnishings and fashions will elicit a chuckle or two. Bad Ronald is part of the Warner Archive Collection of previously unreleased cult favorites and black and white classics.
Posted by JadeB at 7:16 PM No comments: