From the Archives: A Bang, Not a Whimper: Marilyn Manson/Monster Magnet Concert Review, 1999 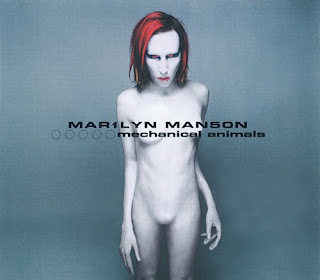 
When you reach the age where you are, as Jethro Tull once espoused, you are too old to rock 'n' roll and too young to die what can you do? I say, if you're going out,waving the white flag, passing "Smoky Joe's Cafe" on the way to a reviewing a rock concert and thinking, sadly, that you'd rather be at a Broadway show (this actually happened) than at a concert, you know you're finally....old. I say, if you gotta go out, if you gotta cop to your geriatric status, go out with a BANG, not a whimper.

I'm at the age now where I feel stupid inviting people my age (39) to see bands that I really like - the music I listen to is just too bizarre-or LOUD-- for every person over 30 except me. It's kinda awkward to drag along the accountant I dated last week to a concert so he can have a heart attack when one of the performers (allegedly) commits some onstage atrocity. I don't have time to for a trip to the emergency room. The most overwhelming element of the night was the underwhelming amount of fans in attendance. What genius decided that two local NY arenas could be filled by said bands!! And this was announced when Hole was on the bill. There was nobody there. Not a soul in the balcony. A half filled main floor. Empty spaces in the mezzanine. It was pretty pathetic. You'd never ever guess this from all the Satan's minions publicity that actual, lauded music was involved- that two albums that had occupied many rock critics' Top Ten lists for 1998 ..pseudo Ziggy Stardust concept (MM #1) and old school hard rock more popular in Europe than America (MM #2) Even Nashville Pussy, the opening band, ( 2 girls, 2 guys, hyper-rock with a lot of dirty words) was nominated for a Grammy this year!

At the purist end of the spectrum, we have Monster Magnet, an Old School sex and drugs and rock n' roll biker band. Eschewing flashiness in favor of straight ahead rock, this New Jersey based band features guitarists who attack their instruments fervently, a singer with an attitude in black leather pants, strippers onstage for the final song, etc. If you were to leave samples of stoner rock in a time capsule for aliens and all eternity, this would be one of the representatives. This is what rock n' roll was like when I was sneaking Peppermint Schnapps into concerts at the "Arrogant Brawlroom" in Chicago...this is how it should be done more often.

So here we are-Marilyn Manson,the most vilified rock star/group in recent memory-in the South, local politicians go to great lengths to cancel impending concerts, one town even sponsoring an ordinance to ban him from the premises. Is MM really the pied piper for all things malevolent?

No, but he and his bandmates put on a helluva show. A concert of this magnitude is truly a cathartic experience. Once in awhile, it's fun to feel complete joy and abandonment at something insulting to the proper world, to indulge in a Beavis & Butthead moment, such as "He's on a cross and it's made of TV sets!. Look at.that mosquito outfit - it's so cool.". Costume changes in abundance,glitter, lights, fireworks, and fierce, non-stop riffs-you name it, our boy had it Although I spent half the show obsessed with the rumor that lip syncing was a definite possibility and that Marilyn isn't actually singing. But even if that's true, his raison d'etre is as a performer, not as an accomplished musician. And though his music is rarely discussed in the general media, (why talk about music when you can interview the latest protesting politician/religiouso and get a good sound bite for the ten o clock news?) the Mechanical Animals CD has some fantastic songs on it, including one anti-drug song Coma White and I Don't Like The Drugs (But The Drugs Like Me) Of course, we have to see his bare butt at every concert. Does anybody really want to see this EVER? Keyboards were roughed up-but no  major carnage occurred during this performance. Not to say that Marilyn, Twiggy,  etc. are Boy Scouts. A droll,smartass comment such as,. "In my world, Special K is a breakfast cereal. I will not be hanging out with the band", may be inserted here; however, these guys are way too smart to provide obituary fodder or write for the Betty Ford Clinic Newsletter anytime soon.


"Paging Satan. Satan, pick up the white courtesy telephone in the lobby". Paging Satan." Satan was not in attendance at this event. Maybe it was a slow night.. or maybe I don't have the observational gifts of a rural Mississippi preacher. And where are the evil, disenfranchised youth? Don't seem much different to me than when I was a kid, just a bunch of polite suburban kids in Goth garb. And there was less pot smoking than when I was in high school. I bet the copious security detail had more problems with stockbrokers at the hockey game the next night. Hey, it's not a rock band getting drunk and defecating on a drink cart in First Class...its your friendly neighborhood banker.* Some people might consider a guy on a cross (even one made of TV sets) blasphemous,or find it inappropriate for strippers to appear in front of mostly high school kids (see video below) or blanch at "motherf***er" being the most repeated word of the evening..So what do you consider satanic. Porno? The media? Bad Chinese take-out? It's like Mr. Manson himself says in one of his lyrics "Shock is all in your head..."

*This was an infamous news story at the time.

This encore of Spine of God that night was like a dream come true for me....a nightmare for sane people, perhaps, but a dream for moi.