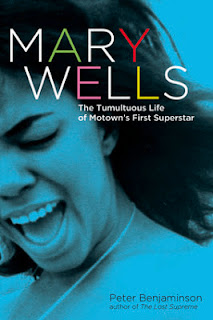 Mary Wells, best known for her 1964 hit My Guy, was Motown’s first female superstar. Long before Diana Ross and the Supremes graced magazine covers and TV specials, Wells broke ground with her playful voice and good looks, before a serious of wrong turns dimmed her star.

Peter Benjaminson’s entertaining and thoroughly researched “Mary Wells: The Tumultuous Life of Motown’s First Superstar” (Chicago Review Press) details the Motown great’s life through archival research, interviews with her associates, friends, lovers-and, most notably, four hours of interviews recorded by journalist Steve Bergsman shortly before her death. Benjaminson, the author of two other books about Motown (“The Lost Supreme: The Life of Dreamgirl Florence Ballard” and “The Story of Motown”), handles Wells’ story with compassion. Despite all the twists and turns of her life, (including relationships with two of the Womack brothers), her post-Motown travails turn out to be as fascinating as her ascent to stardom.

Born into an impoverished Detroit family in 1943, Mary hardly knew her father. (She later said he was Sicilian, a claim that was never substantiated.) She sang in several local groups before cornering Berry Gordy at a club with her song Bye Bye Baby., which she wrote her for Jackie Wilson to sing. Gordy, however, was so impressed by her voice he had her record the song instead, and her career at Motown swung into full gear.

Competition from the Shirelles and other early ‘60s girl groups couldn’t end her reign. She held a firm grasp onto the Billboard pop and R & B charts between 1960 and 1964 with You Beat Me to the Punch, Two Lovers, The One Who Really Loves You and other catchy hits, many of them penned by Smokey Robinson. She recorded an album of duets with a newcomer named Marvin Gaye. The Temptations and Supremes occasionally sang backup for her and she traveled with an entourage.

“She stood for all the courage and perseverance that any female should need to enter into show business and have a place in it,” Martha Reeves of Martha and the Vandellas notes in the book’s opening chapter. Mary achieved stardom without the help of later Motown mainstays such as their charm school for performers. She had an English teacher correcting her girly “ummms” and “aah”s, and received little publicity from Motown. They did take time to issue a press release the girl who beat the Beatles when in early 1964 when My Guy eclipsed the Beatles’ long winning streak, replacing them at #1. When Mary opened for the Beatles in the UK; the lads became big fans of hers, standing by the side of the stage watching her perform. She even recorded an album of Beatles songs for 20th Century Fox, but the album didn’t chart.

The first half of the book deals with Wells’ climb to stardom at Motown, and the second half with what happened after Mary left Motown in 1964 after a dispute with Berry Gordy. He implored her to stay, but newly-formed 20th Century Fox Records offered her a $250,000 advance and promised her a movie career. Wells was at the top of her game when she left Motown, but her first husband Herman Griffith encouraged her to accept the offer. “Herman Griffith, her first husband, certainly misled her by urging her to leave Motown.” Benjaminson said in a phone interview, “Of course that’s Monday morning quarterbacking. She knew that other stars of her stature were getting paid more she also knew that the first record she recorded was a hit, it was a top 100 Billboard hit as far as she was concerned it wasn’t the company making the hits. It was her showing up.”

Wells’ love life alone could fuel a daytime soap opera. She married Cecil Womack in 1966 and had three children with him and divorced him in 1977 to live with his brother Curtis. (They had a daughter named Sugar.) She also had dated Jackie Wilson, Otis Williams of the Temptations and Wilson Pickett. Wells never abandoned songwriting or performing, but her success waned after she left Motown for a number of reasons. Always tenacious in her career, she suffered setbacks due to lack of promotion from her post-Motown record companies and bad personal decisions. But this isn’t your usual tale of an artist hitting hard times. Mary’s descent differed from many fallen stars in that her desire to make music never wavered despite the turmoil. “Yes, that’s one of the things that intrigued me about her”, Benjaminson says, “She was totally determined. Apparently that was her personality. She was crippled and in the hospital for two years with spinal meningitis. Then she got tuberculous, which started again in her early twenties after she left Motown. She went to school – junior high, high school, even though she was two years behind. She started looking for a job in the music industry and more or less forced herself on Berry Gordy. There’s a person with a purposeful gait in life. She always wanted to move forward and moved right through her life like that. She made mistakes, obviously, but even at the end on her deathbed she was telling the doctors what she would sing on her next tour. She was always a determined person and I admire people like that.”

Wells smoked two packs of cigarettes a day most of her life, and continued performing even when her voice gave out. Even some of the odder events in her life (including a faked kidnapping and a hotel room shooting) endear the reader to her – at least that was my response.

Bruce Springsteen, Anita Baker, Rod Stewart and Robert DeNiro, among other celebrities, donated money towards Mary’s medical care when she developed throat cancer. She received an undisclosed amount of money from Gordy to make up for alleged underpayment at Motown, but didn’t have much time to enjoy it. She died of throat cancer on July 26, 1992. Gordy paid for the funeral, and Smokey Robinson, Little Richard and Stevie Wonder delivered eulogies at her funeral.

“Mary Wells: The Tumultuous Life of Motown’s First Superstar” is a portrait of a flawed but intriguing musical star. Benjaminson has a background in investigative reporting, and it certainly helped him piece together the twists and turns of Wells’ life. This biography presents a balanced but empathic view of Mary Wells’ life. It humanizes a singer known only to most people as “the girl that sang My Guy.“

This review first appeared on Entertainmenttoday.net
Posted by JadeB at 8:44 PM No comments: