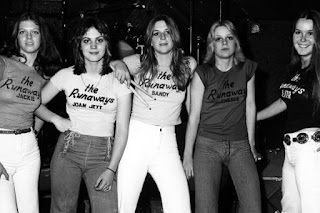 Jackie Fox of the Runaways : Manager Kim Fowley Raped Me - The Huffington Post

Women, and especially teenage girls, had NO voice in the 1970s and for a good part of the 1980s regarding sexual assault. Even strong, ambitious women and girls could be at the mercy of a powerful (or conniving) man and wouldn’t be believed by anyone. Things started to change in the 1990s.

Kim Fowley, the Runaways manager, was given a pass for his behavior by many in the music scene because he was a colorful character and an all-around advocate for rock ‘n’ roll. While he seemed like a charismatic, but somewhat grating, huckster from afar, many people throughout the decades have related stories about being victimized/almost victimized or just plain creeped out by his behavior. (Read some of the comments underneath the article.)
Posted by JadeB at 11:00 PM No comments: