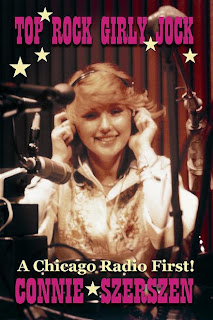 Women’s voices were rare on the radio, even in broadcast hungry Chicago til about 1970, unless you were a singer on a hit record or a character in a commercial. It was downright strange to hear a female disc jockey on an AM oldies/Top 40 radio station. That is, until Connie Szerszen, the self-proclaimed “Polish Princess” broke the barrier and became the first female DJ to host a prime time show on a major market AM station. Szerszen's autobiography, Top Rock Girly Jock, is a breezy and heartfelt look at the days when AM radio ruled the roost in Chitown.

Szerszen began her broadcasting career at all-girl, all-jazz  WSDM-FM, where Linda Ellerbee also got her start. WSDM’s “Den Pals” as the DJs were called, announced songs in sultry voices and posed for sassy promo pics in their maxidresses and flowered hotpants. Soon, Connie caught the ear of bigwigs at WIND, one of Chicago’s popular AM stations, and her spunky, All-American personality made her a favorite with fans, but she still had to deal with resentful male DJs and executives. In 1973, the station promoted her from weekend DJ to a full-fledged member of the on-air staff.

“The Polish Princess” blazed the same trails as feminists of the day with out being loud or abrasive. She appealed to listeners across the board—young, old, male and female. “I myself, had nothing to do with women’s lib” she writes “I just wanted to dee-jay.” She referred to herself as “your top rock girly jock’ and introduced an ultra-clean version of strip poker as between song banter, extolling listeners to take off their dentures, hearing aids  or similar innocuous items.

Through the years, Szerszen encountered many of the era’s well-known celebs, and the book is sprinkled with photos of her with famous singers (Tom Jones, Stevie Nicks, Bobby Vinton) pop culture icons (Tiny Tim, Steve Allen) and her fellow DJs. Chicagoans of a certain age will get a kick out of pics of Connie posing with a plaid-suited Wally Phillips and “Chicago Ed” Schwartz wearing a pumpkin Halloween costume. Szerszen also recalls her “unconsummated” date with Neil Diamond, and a hallway fan “ambush” of Elvis (Presley, that is, not Costello). Szerszen was a fan of the celebrities who passed through the radio station and affiliated promo events, and her enthusiasm shows in her writing.

There were no “turkey drops” sponsored by Chicago radio stations like on WKRP in Cinncinnati, but station DJs were trotted out to local amusement parks, zoos, parades, and sporting events on a regular basis. WIND even hosted a kite fly in Grant Park til kite flying was declared illegal in the Chicago city limits. The station and its fans staged a light-hearted protest about that ban. And Connie has some funny anecdotes about her remotes from the zoo. (Those pesky primates!!)

Top Rock Girly Jock covers a lot of ground. It’s not merely a memoir about Szerszen’s radio days. She writes lovingly about her upbringing in a Polish Catholic family, and updates us on her life since WIND. She DJed for a local country station, worked in real estate, took up portrait painting, and returned to radio in 2002 to host  70s Saturday Night on oldies station WJMK.

If you’re a fan of radio history, or a current or former Chicagoan who likes to relive memories of “the good old days”, you'll find Top Rock Girly Jock to be a fun read packed with some great photos of the Windy City’s AM radio heyday. 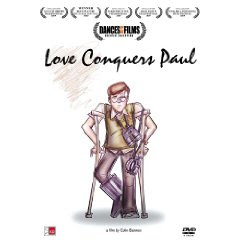 Colin Bannon’s indie film Love Conquers Paul is a bit confusing at first glance…in a good way. During the first few scenes, we get a glimpse of handsome but socially awkward young Paul, (Brendan Bradley), going through his daily routine, which includes videotaping unsuspecting young women on the streets. So, we wonder, is Paul a stalker or just a lonely misfit?

Sure, it’s a creepy premise, but we grow to like Paul. Instead of using the videotapes for untoward purposes, he uses them to learn more about his “crushes” so he can approach them without fear. He’s so clueless and likable that we we root for him to climb out of his social morass. Paul’s adventures are a pastiche of despair, witty banter, and personal growth. There’s nice guy Paul, eating his dinner by himself every night and polishing his pottery collection - and then he spends the night watching videotapes of women he fancies. His only confidantes are Mr. Feigenbaum (Peter Riegert) his boss at the dry cleaners where he works, and his gay best friend Ray (Russell Garofalo).

Love Conquers Paul isn't always what it appears to be on the surface. It's  a romantic comedy, but parts of it are downright depressing in an off the cuff, real life way. Even potentially icky scenes spin into something genuine. Ray tries to seduce Paul, but they get past this faux paus and their friendship grows stronger. Paul’s chance encounter with beautiful and brash artist Esoterica (Elizabeth Wood), evolves into his first love affair and unleashes a chain of events that transform his life forever.