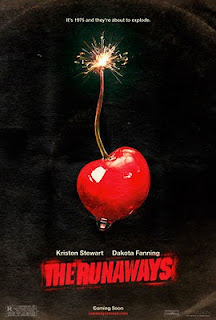 Floria Sigismondi’s film The Runaways, is an accessible, mainstream version of the short-lived career of the groundbreaking all-girl rock band. Lead singer Cherie Currie and guitarist Joan Jett are the focal points of the film, which traces their first meeting at a glamrock club for underage kids to the unraveling of the band a few years later.


Kristen Stewart channels Joan Jett in this film. Not only does she look like Joan, she has Jett’s posture, walk, and budding tough girl bravura down pat. Dakota Fanning likewise plays Cherie Currie’s doppelganger, whether she's strutting onstage in her infamous molded white corset or maneuvering between the sleazy rock ‘n’ roll lifestyle and her troubled family.  The 2010 faux Runaways performing Cherry Bomb will leave even older fans doing a double take before realizing it’s not the real band. The lead actresses were coached extensively by Jett and Currie prior to filming , and it shows in their realistic performances.

The other band members are represented in recording and performance scenes and little else. Stella Maeve as drummer Sandy West shares a few pivotal scenes near the film’s beginning with Stewart and Fanning. Scout Taylor Compton as Lita Ford has one major blow-up scene and little else; composite bass player Robin (Alia Shawkat) has no dialogue.

But Michael Shannon as creepy manager/Svengali Kim Fowley steals the show. There’s no telling whether we’ll laugh, groan or be grossed out by his antics. Fowley uses such endearing terms as “dogcunt” while addressing the girls. In the film, has a bunch of local boys throw dogshit at the girls to teach them how to handle hecklers (This was an exaggeration. They only got tomatoes toilet papers rolls, et al thrown at them in real life.) The allegations of sexual abuse hinted at in Cherie’s autobiography and in Vicki Tischler-Blue’s Runaways documentary Edgeplay are left out of The Runaways.

First time feature film director Floria Sigismondi cut her teeth making bizarre videos for Marilyn Manson at the height of his popularity in the 1990s. “The Runaways” bears little resemblance to Sigismondi’s past efforts. It’s crisp, linear storytelling that compacts several years of plot in an hour forty five minutes. Sigismondi takes no real liberties here. She changed a few things like the exact time of Cherie leaving the band. The facts remain basically unscathed.

If you want the hard, unvarnished reality of the band’s history, check out Edgeplay, a documentary directed by former bass player Vicki Tischler-Blue. Edgeplay expands on a lot of the All the major players in the Runaways saga expect Joan were interviewed for the film, including Kim Fowley and Kari Krome, but Joan was noticeably absent from the documentary except for archival footage. (Joan and her manager Kenny Laguna were The Runaways’ executive producers.)

Rock ‘n’ roll shenanigans abound in The Runaways. After a bunch of nasty, longhaired hippie musicians insult the girls, Joan goes into their dressing room and pisses on one of their guitars. Joan teaches Cherie how to masturbate (to a picture of Farrah Fawcett). There’s a sense of fun and discovery to Joan and Cherie's relationship even when they’re snorting coke in an airplane bathroom. It’s not sordid business as usual (as it seems to be for teenagers today) its fun, it’s experimentation. The much-ballyhooed lesbian scene between Cherie and Joan is more sweet than prurient, starting out with a kiss in a strobe-lit roller rink.

There’s a subplot involving Cherie’s alcoholic father, and another one involving all the media attention focused on her Brigitte Bardot like sex kitten image. Fowley arranges for a photographer to take a slew of racy pics of Cherie, unbeknownst to the other girls in the band. Needless to say, this causes an insurmountable rift in band dynamics.

I bought the Runaways' debut album at a record store in Chicago’s Ford City Shopping Mall the day it was released in 1976. The Runaways framed album cover is hanging up on my wall above my workspace. Most of my other 1970s albums are long gone, left behind, thrown out, or scratched beyond repair. But that original vinyl pressing of The Runaways survived almost 35 years of cross-country moves and wear and tear.

The Runaways is great entertainment, whether you’re familiar with the band’s history or not. Hopefully, it will pique younger viewers' curiosity about the band and send them to their computers to download some Runaways MP3 albums, and do some more exploring about the founding females of hard rock.

This review is based on a screening of the film at the L.A. Film School, 3/9/10 for the Rock & Roll Camp for Girls