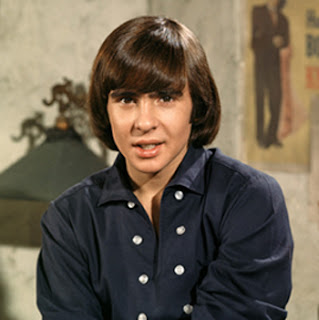 When Davy Jones of the Monkees died on February 29th, all types of people, regardless of age, background or musical preference, posted loving childhood memories, historical appreciations or Monkees videos on their social media pages or blogs.

But here it is a week later and there are fresh postings underneath many Monkees Youtube videos and under news stories about Davy’s passing. Every time a celebrity dies, there’s a flurry of activity on Facebook,  a combination of heartfelt remembrances, simple R.I.P. postings and the occasional troll insults,  i.e. “crack is whack” referring to Whitney Houston. Usually, the virtual grieving lasts a day or two and then it’s business as usual. But Davy’s death has touched a lot of people across several generations beyond that usual first twinge of shock. There was a joy and sense of fun to the Monkees music and TV show that appealed to kids who discovered them through MTV in the 1980s and syndicated reruns as well as original viewers.

Maybe that’s why a week later, people are still posting memories and condolences about Davy while the media has long since moved on to its bread and butter - mindless Kardashian news and political bickering. Outside of entertainment, Whitney Houston was known mainly for her drug scandals and bad behavior. That's one of the reasons her death and its aftermath are still in the news weeks later.The mainstream media pays more attention to Whitney because she was younger and more familiar to a generation weaned on MTV. Most members of today’s news organizations came of age when she was popular – Davy Jones was just some guy on an old TV show to them. Plus, her lifestyle made for better copy. You can get a lot of press mileage out of a drug addict; a nice guy, not so much.

I was in kindergarten when the Monkees premiered. The Monkees - Davy, Micky, Mike and Peter - were the perfect “starter” rock group for a generation too young to appreciate Sergeant Pepper - era Beatles or the raunchy Rolling Stones. Davy was just clean-cut and cuddly enough that Mom could like him, too.  Every Monday night, we waited for the new episode, which always ended too soon. Most of the first album purchases for kids in the neighborhood were Monkees albums. We were very dedicated to the boys, and made a point to be home on Monday nights. God forbid, there was a delay in getting home before the show.  Once we were a few blocks from home after eating dinner at Bonanza Family Steakhouse. The car brushed an 18-wheeler (no one was hurt) and one of the truck’s wheels flew off. Luckily, all matters were resolved and we got home in time to see the show. This was later referred to as the “I don’t care if we hit a train, I wanna see the Monkees” incident.

Davy was the Monkees’ heartthrob, but he was more than just cute. He was a great dancer. My friends and I tried unsuccessfully to imitate his famous sashay dance. (Axl Rose misappropriated this move years later.) And he was as funny as he was cute. There was no such thing as the “funny” Monkee – they were all hilarious in their own way. Davy had funny catchphrases, mannerisms and memorable lines.  “You must be joking.” “It’s cuz I’m short, I know.” were two of the most popular. And who could forget that cute little hiccup sound he made when the boys were in a scary situation, right before they escaped some harebrained villain. To this day, I repeat Monkees dialogue as part of my daily routine. Naturally, 99.9 per cent of the people around me have no idea of their origin. (“What a great-looking cardboard box!” Quick! What episode is that from ?)

When people ask me how I developed my non-sequitur, smartass sense of humor,  I say “The Monkees.”  I don’t remember much about the first season. As the music became more varied -and the humor turned weirder and more random during the second season, my interest grew. I loved the way the guys would break the fourth wall and speak directly to the audience. So cute. I didn’t know, of course, that pot-smoking and whatnot fueled much of it.

When we were in high school, my friend Mary Beth occasionally brought out her Monkees albums and we’d dance around her bedroom and reminisce, singing along with lesser-known songs like Cuddly Toy (written by Harry Nilsson) and Star Collector (Goffin-King).

“Wait a second!,” Mary Beth exclaimed. These songs are about WHOOREEES! We were listening to dirty songs as kids and didn’t even know it! “Of course, she was exaggerating. The songs were more about flirtatious types than sluts, but then again, mainstream songwriters had to be very subtle  back then, lest the censors confront them with a long list of changes. In the mid-1970s, Davy toured with Micky and songwriters Tommy Boyce and Bobby Hart as Dolenz, Jones,Boyce and Hart. .It was fun to see Davy grown-up but cute as ever and Micky, grown-up and manic as ever, on the Mike Douglas Show and ironically, former Monkees Svengali Don Kirschner’s Rock Concert.

Davy’s passing is more than saying good-bye to a beloved entertainer. It leads to other memories of a 1960s ( or ‘70s or ‘80s) childhood that are long gone. It’s ironic that Pleasant Valley Sunday was originally written as a swipe at suburbia. Now that song brings back wonderful memories of lazy summer nights catching fireflies in bottles or swimming in our above-ground pools while music blared from our transistor radios.    “Rows of houses that are all the same and no one seems to care”. Those  brick homes and their neatly-manicured lawns are now replaced by boarded up buildings defaced by graffiti, at least in my old neighborhood. The comfy JC Penny and Sears Roebuck-equipped house of my youth now resembles a graffiti-laden respite for gang members.

Davy's vocals rarely faltered.  His pitch was always spot on. Even in later years he always hit the notes in concert. He had a good rapport with his fans, he never seemed to have a bad day or a complaint from his admirers. How rare is that in the celebrity world? As Micky said in a Associated Press interview last week “What you saw is what you got. He was very much a song-and-dance man, life of the party, always telling jokes, always on, an entertainer and just a great guy to be around.”

Some Davy trivia - He originally trained to be a jockey before moving to America to perform in Oliver on Broadway  Davy and other actors from Oliver performed on the Ed Sullivan Show in 1964, the same day as the Beatles’ first appearance. Who could have guessed that cute little kid would be the lead singer of a band that would outsell the Beatles and the Stones a few years later?

Davy was adorable til the end. Sure, he gained some weight and often sported the standard uniform of aging Baby Boomer guys – shorts and Hawaiian shirts, but his indefatigable spirit always shone through. He last performed in mid-February in Oklahoma and seemed fine, his normal perky self.

He was married three times, most recently to Jessica Pacheco - Jones, a Telemundo presenter 30 years his junior. She performed as a dancer on the Monkees last reunion tour in 2011.  He had four adult daughters from his first two marriages. One of them, Annabel, is a recording artist in her own right with the band Lady and the Lost Boys. Public memorials are planned in New York and Davy's hometown of Manchester, England.

Rest in peace, Manchester Cowboy. We will miss you.