You Can't Get It On DVD-The Sterile Cuckoo 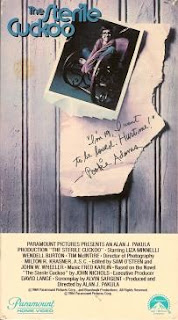 When you hear the name “Liza Minnelli, what’s the first thing that comes to mind? Cabaret, Liza with a “Z”,  the original Arthur or her mother, iconic performer Judy Garland? Chances are one of her first films, The Sterile Cuckoo, won’t ring a bell. Liza received her first Academy Award nomination for her portrayal of quirky college freshman Pookie Adams in the film version of John Nichols’ novel, The Sterile Cuckoo. The 1969 film received critical raves and  earned BAFTA and Golden Globe nominations for Minnelli in addition to the Oscar nod. A VHS version was released in 1998, but it has yet to appear on DVD or Blu-Ray.

Not many people are familiar with Liza’s pre-Cabaret film appearances. Liza played the mistress of successful writer Charlie Bubbles (played by Albert Finney) in the film of the same name. But her second film appearance in The Sterile Cuckoo proved that Liza had her famous mother’s onscreen acting chops.

First published in 1965, the novel Sterile Cuckoo dealt with the “first-love” relationship between  reserved college student Jerry Payne and Pookie Adams, a quirky but troubled young woman he meets at a bus stop.  The novel is narrated by Jerry’s character, but the focus is on Pookie, whose non-stop chattering and kooky demeanor hide a lonely soul.

The film version, which co-starred Wendell Burton as Jerry, was shot at Hamilton College in upstate New York in 1968. Director Alan J.Pakula produced several films, including To Kill a Mockingbird and Up the Down Staircase before serving as both director and producer for Sterile Cuckoo. Pakula would go on to direct Klute, Sophie's Choice and All the President's Men.

Intrigued by the complex character of Pookie Adams, Minnelli agreed to the role. By the time her film career began, she had already won a Tony for her role as struggling fashion designer Flora Mezaros in Flora, the Red Menace. 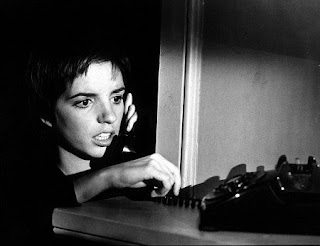 Liza Minnelli as Pookie Adams in The Sterile Cuckoo

The Sterile Cuckoo is first and foremost a character study. While Jerry has a fleeting relationship with his college roomies, Pookie only has disdain for the girls in her dorm, constantly referring to them as “weirdos.” Pookie’s father appears only once, when he drops her off at the bus stop at the beginning of the film. While cavorting with Jerry in a graveyard on a windy day, Pookie reveals that her mother died giving birth to her. Even as a college freshman, Pookie has no friends or relatives to help her pass the time. She’s either alone or with Jerry. During a school break, she pretends to go off to see her father, but she is actually still on campus, by herself. Still, she has a exuberant spirit about her, and this entices Jerry. He falls in love with her, despite her needy, neurotic tendencies. Pookie takes the lead when the couple first trysts in a rustic motel. Jerry’s so shy he can’t even bring himself to undress her. Later, Jerry naively responds to Pookie’s revelation that she might be pregnant and offers, rather unromantically, to marry her. In the end, Pookie’s overwhelming need for affection and assurance -and her self-absorption - drive Jerry away.

The easy-listening song Come Saturday Morning by the Sandpipers underscores several “lovers-romping in the meadows” scenes. It’s charming the first time you hear it, but after the third time those lilting vocals crop up, it’s cringe-inducing. A film of this caliber didn’t need it, and even reviewers at the time, including Roger Ebert, noted this faux pas.

The film's tale of doomed first love on a bucolic college campus compressed the novel’s storyline into a year instead of the three years covered in the book, but there’s no inkling that anything has been “left out” of the film version. Even though there are a few romantic comedy type moments (Cue Come Saturday Morning), The Sterile Cuckoo is a bittersweet account of first love. But isn’t first love always bittersweet?