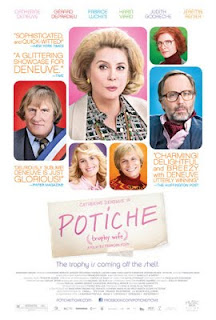 Potiche, a lighthearted farce based on a French play by Pierre Barillet and Jean-Pierre Grédy, stars Catherine Deneuve as trophy wife (“Potiche”) Suzanne Pujol. Set in 1977, the comedy touches upon the women’s rights issues of that era, albeit via a whimsical plotline. While her husband runs the local umbrella factory, Suzanne jogs around the estate, cleans the kitchen and longs for a more fulfilled life. Suzanne’s daughter Joëlle (Judith Godrèche) counsels her mother about the Women’s Lib movement and advises her to break away from her stifling routine.
When angry workers take Suzanne’s husband Robert (Fabrice Luchini) hostage during a strike, it’s up to Suzanne, whose father once owned the factory, to negotiate with them. Her initial hesitancy fades, and she finds that she has business skills – and a strong yet likable personality that wins over the workers. Even Robert’s saucy secretary/mistress Nadège (Karin Viard) eventually takes Suzanne’s side in this umbrella factory battle of the sexes.
While negotiating with the workers, Suzanne encounters union advocate Maurice Babin (Gérard Depardieu), an ex-lover who may be the father of one of her children. Suzanne and Maurice had one brief tryst some twenty years before, but both of them remember it fondly. It’s a treat to see Deneuve and Depardieu emoting together. Whether they’re bantering back and forth about politics or dancing in a nightclub, the chemistry is still there. Watching them together is like seeing college friends reunite decades later; they may be a bit older and heavier than their glory days, but they still have that je ne sais quoi.
Director François Ozon (he worked with Deneuve before on “8 Women”), brings out the frothy best in his source material. Robert Pujol gets his comeuppance and becomes a “trophy husband” by the end of the film. Suzanne’s outspoken liberal daughter and ambiguously gay son Laurent (Jérémie Rénier) are fun 1970s clichés. Suzanne hires Laurent as the company’s umbrella designer at one point, and Joëlle is her mother’s main cheerleader and tough-as-nails business advisor. And the fashions are a spot-on trip through the best (or worst, depending on your point of view) of 1970s fashion. Joëlle’s Farrah Fawcett hairstyles, Laurent’s pullover sweaters and the over-sized eyeglasses sported by some of the characters lend a cheesy and authentic charm to the film. While Potiche is a comedy and not a musical, it does end on a tuneful note, with Deneuve singing an upbeat number at a political rally.
Official Site
Posted by JadeB at 9:39 PM No comments: