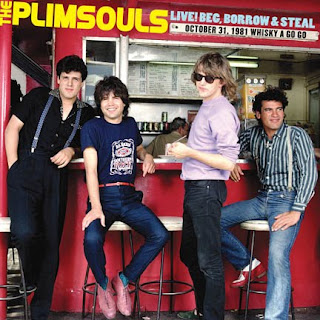 The Plimsouls’ lean and catchy melodies lit up the the L.A. club scene in the late 70s/early 1980s. Singer/guitarist Peter Case formed the Plimsouls in 1978, after his first band, the Nerves, disbanded. Live! Beg, Borrow & Steal: October 31, 1981 Whiskey A Go-Go captures the Plimsouls during their heyday. Recorded on Halloween 1981 at the Whiskey A Go-Go on the Sunset Strip, it’s a slice of that coveted time in L.A. music history. Recorded the same year the band released their first (currently out of print) studio album. Live! Beg, Borrow & Steal features live versions of most of those songs and a few boisterous covers.

The Plimsouls are known to the public primarily for the song “A Million Miles Away” from Valley Girl. If you think that song was catchy, how’d ya like 17 more like it? Yes, L.A. was chock full of great bands and clubs in 1981. Hard-core punk and alternative bands were a dime-a-dozen on the scene, but the Plimsouls carved out a fresh and frenetic power pop sound. They retained a garage rock edge that cemented their identity. You can pick out a Plimsouls song from the soulful opening riffs of Eddie Munoz’s lead guitar every time.
There’s no lull in the action here, from the urgent opening of “Lost Time” to the jangly beat of “Zero Hour.” One party song segues into another, with every tune as energerized as the next. It’s a reminder of what grassroots rock ‘n’ roll was meant to be — kicky, unadorned fun. Members of New York’s Fleshtones join the band for of Gary “U.S.” Bonds’ “New Orleans.”
This is the Plimsouls’ second live album. 1988’s One Night in America, was released long after the band had ceased to exist. Case went on to a solo career, but the Plimsouls albums remained legendary among fans of garage rock, power pop and the L.A. scene.
The sound on Live! Beg Borrow & Steal is crisp and clean. It really gives you the sense that you’re standing right there in front of the stage listening to the band. Even the cheering and shouting fans come through clearly.
The band sits in front of the original Sunset Grill (the same one made famous by the Don Henley song) in the cover photo. The CD insert contains striking photos of the band by renowned rock photographer Robert Matheu. A note to vinyl collectors — Alive Naturalsound Records is releasing a limited edition LP version of Live! Beg, Borrow & Steal, with a free poster.
Posted by JadeB at 10:10 PM No comments: