Lives Of Quiet Desperation - "The Good Girl" and "One Hour Photo" 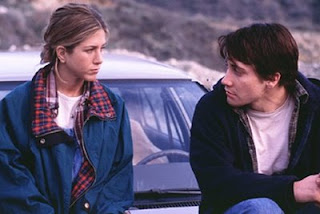 Jennifer Aniston and Jake Gyllenhaal in "The Good Girl"
(A slightly different version of this review appeared on Modamag.com in 2002 under my other byline, Marianne Moro.)

Feisty but unfulfilled women have always played prominent roles in film and literature. In Thelma and Louise, they choose death rather than return to their previous lives. In Madame Bovary, the heroine suffers a slow spiritual and emotional suicide til her body finally gives out, too. In The Piano, she chooses a new life. In the Jennifer Aniston film, The Good Girl, the character of Justine Last does the right thing - even though both her choices are pretty dismal, she chooses the lesser of two evils. Her life of quiet desperation is punctuated by a few bouts of noisy desperation.

The theme of "The Good Girl" is that of the woman trapped in a routine and groundless life by marrying the wrong man. This tried and true formula was bereft of humor til Thelma and Louise. Like ”Thelma and Louise”, The Good Girl has its funny moments, but overall, it's a less tragic, modern extension of Madame Bovary. Justine (Jennifer Aniston) marries her schleppy high school sweetheart, Phil (John C. Reilly), whose saving grace is that, like Charles Bovary, he is utterly clueless. No wonder Justine is drawn to young, mysterious co-worker Holden at the Retail Rodeo, played by Jake Gyllenhaal. (Classic exchange upon their first meeting - Justine - "I notice you don't socialize much. Holden -"I'm a writer.")

The psychological ramifications of a vacuous marriage are the same for a man, I suppose; though he can't be called a slut if he seeks solace elsewhere. Most indicative of this emptiness is the scene where Justine has to choose between staying with her sick friend and a tryst with Holden, when a quick shot of adrenaline becomes more important than anything else. 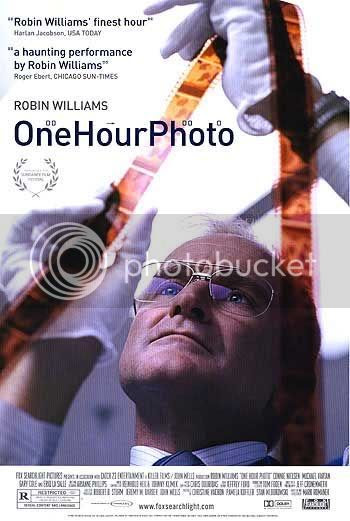 There's a long road from the likable but flawed Jennifer Aniston character in "The Good Girl" to the creepy photo clerk played by Robin Williams in One Hour Photo. Both films feature dead-on performances by actors generally known as comedians. Both delve into lives of quiet desperation that eventually explode. For Sy Parrish in One Hour Photo; there is no respite, no one to go home to - well, no one real anyhow. Meticulously plotted and antiseptic as the polished Sav-mart floors Sy walks on, repression and rage replace the camaraderie of the “Good Girl’s” Retail Rodeo. In the big glossy suburban world the gap between normal folks is wide enough, but in Sy 's case, it's more like a chasm. Usually, you'd feel sorry for such a character, but here the ickiness factor is immediate and all consuming. Even the noble reason given for his actions at the end doesn't engage our sympathies.

Both films exhibit a colorless suburbia that unwittingly becomes a character on its own. The Retail Rodeo, the Sav-mart and the upscale hotel in One Hour Photo are vanilla bland. It's no accident empty lives are played out in such an atmosphere.