Book Review: Runnin’ with the Devil: A Backstage Pass into the Wild Times, Loud Rock and Down and Dirty Truth Behind the Making of Van Halen By Noel E. Monk with Joe Layden 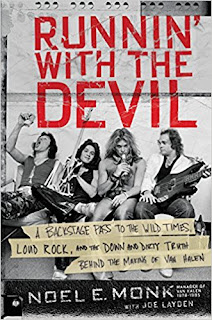 Book Review: Runnin’ with the Devil: A Backstage Pass into the Wild Times, Loud Rock and Down and Dirty Truth Behind the Making of Van Halen
By Noel E. Monk with Joe Layden

Noel Monk managed Van Halen from 1979 until the band fired him in early 1985. With the 30 year non-disclosure agreement now lapsed, Monk tells his side of the story, but not without a tad of bitterness, in Runnin’ with the Devil: A Backstage Passinto the Wild Times, Loud Rock and Down and Dirty Truth Behind the Making of Van Halen.

Monk managed the Sex Pistols ill-fated tour in 1978, stage managed at , and seemed a natural to handle the next big thing.

Handling any rock band on the road is a chore, but Monk had his work cut out for him with VH. Monk had to assure Eddie a blow job couldn’t get a girl pregnant and reels in disbelief when he records the guitar solo on Michael Jackson’s Beat It –for free.

Alex was a mean drunk. “Al pouring Schlitz Malt Liquor over himself and his drumkit…was the soberest part of the day for Alex”, Monk writes. And Dave’s ego and ADHD (buoyed on by cocaine) resulted in roadies having a straitjacket on hand, and not just as a joke.

Monk considers the band’s appearance at the US Festival in 1983 to be “one of my worst (days) as manager of Van Halen.” As anyone who was there can tell you (I was), apparently there was such a thing as Dave doing much coke, but the rest of the band took up the slack musically.

Runnin’ with the Devil reinforces the notion that musicians and entertainers aren’t necessarily exemplary human beings. Even before adding groupies and drugs to the mix, the guys come off as emotionally stunted. In Monk’s reminiscence, there are three bad guys here. Dave’s an egotistical blowhard, Eddie plays guitar and doesn’t know about much else, and Alex is a drunken bully.

In the early days, Dave wanted to marry a movie star, but Ed beat him to it. Valerie, like millions of other girls, had a crush on Eddie. Unlike those girls, though, she got to meet him backstage in her hometown and it was love at first sight. Valerie wasn’t much different than her TV alter-ego, Barbara Cooper, but she eventually fit right in with the entourage and the rest of the wives.

Valerie did coke because “Ed likes me thin”, but is confused about groupies. She wondered why the guys weren’t hornier after being away from their wives for so long.

Monk instituted a payola scheme for the band’s least commercial album, Fair Warning. It was probably overkill – the album had two radio-friendly songs, Pretty Woman and Unchained. The band had almost achieved iconic status by 1981, so it was an unneeded boost . Around the same time, Dave’s alleged paternity suit insurance was widely touted in every publication from Time to Hit Parader. It was a PR stunt, unlike the exclusion of a certain candy backstage per their rider. The band actually had a good reason to exclude brown M & Ms  from the catering table, as Monk reveals.

Some of the behind the scenes anecdotes really knock the sex and drugs glamour out of the band’s image. What should have been a triumphant bus ride to after the last DLR-era show ended up being depressing and icky. The guys comes off particularly pathetic in Monk’s description of the meeting where the band fired him

Eddie, Alex and Dave cut Michael Anthony, the band’s only “nice guy” out of his share of the band’s royalties from the album 1984 on, and made him a salaried player. Even after this, they still resorted to junior high bullying tactics on the road like they resented his mere existence.

Was the acrimony toward Michael Anthony solely because of money, or was there some other reason?

Some critics would question why Anthony would accept the demotion and stay in the band. (Shades of Rick Wright and Pink Floyd?) Although what was Anthony supposed to do? Quit the band and release a solo album that went nowhere and fade into obscurity, or stay with one of the biggest American rock bands ever as a salaried player?

Being a hardcore fan, I’m going to nitpick one detail. Monk says the band rarely played Happy Trails during their concerts, but I saw them do it at least twice, maybe three times.

Van Halen fans should read Runnin’ With the Devil after Greg Renoff’s Van Halen Rising and before Sammy and Dave’s books.  VH Rising has lots of info you won’t find anywhere else. It’s a well-researched look at the band’s origins, (Dave was a rich kid; Eddie and Alex were from the wrong side of the tracks.) And Runnin’ With the Devil’s backstage shenanigans probably won’t shock you if you know anything about the band, but the degree of acrimony between the guys near the end of the first VH era may leave you flummoxed.