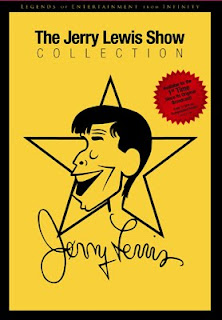 When you think of Jerry Lewis, The Nutty Professor, Dean Martin, the Muscular Dystrophy Telethon, and "Hey, Laaaady…” all come to mind. Chances are his solo TV variety show doesn’t ring a bell. The Jerry Lewis Show aired on NBC from 1967 to 1969, and went largely unnoticed by critics and viewers alike. Infinity Entertainment Group has released The Jerry Lewis Show Collection, a two-DVD package of “best of” bits and sketches from the show’s first season, and highlights from one of the second season’s shows.

Lewis portrays his trademark fumbling nerds with an array of guest stars. Janet Leigh, Nanette Fabray, Don Rickles, Ben Gazarra, Flip Wilson, Joey Heatherton, Laurence Harvey, Shirley Jones, Harold J. Stone — the list could fill up this page. They play straight man (or woman) to some of Lewis’s most recognizable characters. There’s the perpetual loser Sidney, screwing up a job at supermarket and trying to fit in at a Swinging Singles apartment complex; the hyper Canadian mountie Sergeant Goodguy; the Chinese detective with the politically incorrect moniker Sam Lichee; and Ralph Rotten, the mustachioed bad guy "fighting the forces of niceness and goodness." Jerry’s co-stars, (notably Ben Gazzara during a sketch set in a talent agency), have a hard time keeping a straight face when he ad-libs.

As a slice of 1960s variety show nostalgia, The Jerry Lewis Show Collection isn’t bad. Since the DVD's contain only selected skits, minus musical numbers and the show’s original opening and closing credits, we get a “YouTube” version of the shows, not complete, cohesive performances. Longtime fans of Lewis (or of vintage TV variety shows in general) will find this frustrating. One of the most fascinating aspects of ‘60s comedy/variety shows was the juxtaposition of burlesque type comedy skits with musical guests like the Jefferson Airplane and Strawberry Alarm Clock (or even Enzo Stuarti!). We get none of that here. The Osmond Brothers appear in a comedy skit, but we don’t see them perform any songs. Were the show’s musical performances excised from the finished DVD because it was too expensive to obtain rights to them?

The only DVD extra is a generous photo gallery, complete with captions. The Jerry Lewis Collection is appropriate for serious collectors only; other folks should check out a copy of Jerry Lewis: The Legendary Jerry Collection, which features The Nutty Professor and other classic Lewis films, and The Dean Martin and Jerry Lewis Collection.