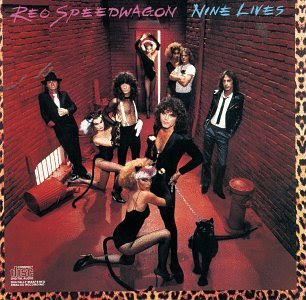 As a kid growing up on the Southwest side of Chicago, I liked all kinds of music. I had my new wave/punk friends, who wrote poetry and dreamed of living in New York or Los Angeles, and we traveled to the North side to see bands like the Pretenders, the Patti Smith Group, the Waitresses, Wreckless Eric and the Police.

Then I had my mainstream friends who smoked pot, drank beer and got promoted in their retail sales clerk jobs. We’d go to all the arena rock concerts at places like Soldier Field to see bands like the Stones, Peter Frampton, Ted Nugent, Cheap Trick, Blackfoot, and, before they turned into mush, REO Speedwagon.

A few days ago, I happened upon a video of REO on the Midnight Special from 1978. I kept playing the video over and over-not to see Kevin Cronin’s Howard Stern-esque hair, but to marvel at Gary Richrath’s guitar playing.

Roll With the Changes-Midnight Special, 1978?

“Listen to that tone! I wanna hear that again. It sounds so good.” I clicked 'Play again", instantly transported back to the International Amphitheater in 1979. Damn, and couple that with the keyboard solo, you've got a straightforward rock 'n' roll sound that defies sub-genre classification. I don’t care if you’re a jazz snob or a punk rock snob, ya gotta admit, that band could play! I watched the video so many times I resorted to reading the comments posted underneath it. The posters actually had something to say and most of them were pretty funny.

The YouTube comments made me peruse the REO Speedwagon fan websites and discussion groups. Most of the website comments were written by an intelligent bunch of diehard middle-aged fans, and no one seemed to like the new “playing in your local Wal-Mart parking lot” version of the band. Seems that only causal fans like the current version of REO Speedwagon.

Some of what I read broke my heart, being a fan of their music and soft-hearted when it comes to human melodrama. I’m over it now, but it seems ironic that a band whose music made me so happy and gave me hope when I was a depressed teen could turn out to be so dysfunctional, troubled, and/or petty as real people. The main complaints on the fan message boards concerned Kevin Cronin, the lead singer, who hails from my old childhood haunt, Oak Lawn, Illinois. I used to brag about that to people. Of course, the guitar player from Disturbed is also from Oak Lawn…errr.. maybe I’d be better off not mentioning Oak Lawn at all. There were mucho comments about Cronin’s ego and substance abuse, Richrath’s drinking and “too many girlfriends”, the keyboard player’s mental breakdown, etc. Then there were the lawsuits, one of which resulted in the band apologizing to their fans on the official website, and then the fan club president sued them for insinuating she was a lesbian. It’s like a pathetic, humorless version of Spinal Tap.

So let’s talk about happier times.

"All of a sudden out of the clear blue sky, the telephone rings…"

Ahh, the 80s, the height of rock star fashion…Somewhere else, but not here..dig those melon-colored parachute pants..


I only cared for three REO albums-- You Get What You Play For, You Can Tune A Piano But You Can’t Tuna Fish (such innocent times! People actually thought that was a clever title) and Nine Lives. I adored Nine Lives because it was REO’s “heavy metal” guitar based album. But alas, the music public at large didn’t prefer the hard rockin' REO. Hi Infidelity was released in late 1980 and would forever connect REO with Styx and Journey in the unholy triumvirate of wimp rock.

I didn’t get into that album like the previous ones. After the opening rocker, “Don’t Let Him Go” I lost interest. I bought the next album, Good Trouble, then moved to L.A. and didn’t care anymore. When I glanced at the band’s overproduced mid-80s videos on MTV, REO had morphed into a generic shadow of the rockers I first discovered on a bill they played with headliner Lynyrd Skynyrd.

Each succeeding REO music video featured more and more of Cronin, with Richrath’s guitar and his beautiful dark blonde curls (sigh) hidden in the background, trying to salvage what was left of the “rock” part of “rock band.” Then drummer and founding member Alan Gratzer retired and Richrath was fired. REO soldiered on, and after a few years of low-selling albums on small labels, Wal-Mart parking lots and classic rock tour packages with Journey and Styx beckoned. As for Richrath, he played small clubs with his own band in the ‘90s, then disappeared completely.

A friend dared me to watch the following video, and said he’d give me 20 bucks if I could get through the whole thing. I couldn’t do it.


Come back, Gary Richrath, we need you.