The Front & Baker's Pink: Two Overlooked Bands from the '90s 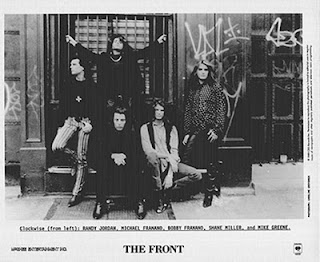 Back in my New York rock critic days, I received a monthly shopping bag filled with review CDs and cassettes (yes, cassettes - it was a long time ago) from my editor. I’d listen to most of ‘em once and then sell them or give them away.  Occasionally, though, I’d find a gem that I’d keep and play over and over again.  One such cassette was by a  Kansas City quintet called The Front, who had signed to Columbia Records in 1989. I kept playing my freebie cassette over and over one night. At about one in the morning, my roommate admonished me. “What hell are you doing? You have to get up at six o clock to go to work!” Well, I was kinda sleepy in the office the next day, but it was worth it.

The Front’s self-titled album got lost in the avalanche of bands signed by the major labels at end of the hair metal craze.  The band’s sound alternated between Love- era cult, blues rock and paisley revival with a dark side. Singer Michael Franano looked like Michael Hutchence or Jim Morrison, depending on your preference. And the band dressed in a style that could best be described as “hippie glam”, a refreshing change from the spandex and black leather jackets of the time. Every song on the album was a winner-there was no fluff or filler on this baby. The tour de force Violent World, the 60s retro-pop Sunshine Girl, the brooding Sin and the sensual strutting of Le Motion deserved more airplay than they got back in the day.

The band did the whole hard rock concert circuit, opening for Alice Cooper, Aerosmith, and Lenny Kravitz, and shot a few videos. Still, the Front never achieved substantial success despite having Doc McGhee of Motley Crue fame as a manager. Even glowing press from music mags couldn’t stir up widespread interest. 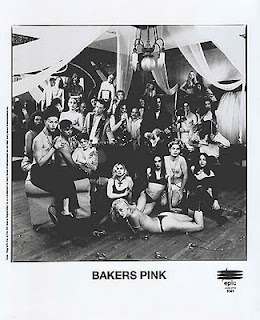 By 1993, the band had a new record company and a new name – Baker’s Pink. The songs on their second album had a harder, trippier edge to them, as though the sound had been fine-tuned to fit in better with the suddenly popular grunge and alt-rock movement. Still, songs like Watercolours and Burn On retained singer Franano’s signature swagger. Unfortunately, the timing was off once again, and Baker’s Pink faded into obscurity just like The Front.

Franano went on to work on music for film and TV, including Woody Allen’s Celebrity, Melrose Place and Party of Five. In 1998, he reinvented himself as Michael Moon and released a solo album. In a 2010 interview in Sugarbuzz Magazine, Michael mentioned that he is working on a new website and hopes to include live recordings from Baker’s Pink and The Front, as well as some new material, on the site.