You Can't Get It on DVD : Made for TV Edition : The Neon Ceiling Most made for TV movies in the early 1970s were either kooky romances ( The Feminist and the Fuzz, The Girl Who Came Gift Wrapped), or horror/suspense (Trilogy of Terror, When a Stranger Calls) , but an occasional slice of life drama/social commentary made its way onto the ABC Movie of the Week. The Neon Ceiling, a drama/romance about a woman escaping a bad marriage, starred Lee Grant and Gig Young and received good reviews when it was broadcast in 1971.

Carrie Miller (Lee Grant) is a sensitive, free-spirited housewife married to a humorless dentist (William Smithers). Their precocious 12 year old daughter Paula (Denise Nickerson) carries around a book on relationship advice for married couples, and is constantly quoting it and asking questions far too advanced for her tender years. Her father is able to deal with Paula’s rambunctious attitude, but not her frail mother, who is unable to keep her mind on cooking dinner properly, much less sparring with a smart-mouthed pre-teen.  Her husband pours out his dissatisfaction about their marriage to Carrie one night, but concludes, “I can’t divorce you. You don’t know how to take care of yourself.”

After the Doctor falls asleep, Carrie wakes Paula up, and they get in the car and ride out into the desert, toward no destination in particular. Later in the film, we discover that this isn’t the first time Carrie and Paula have taken an impromptu road trip.  Away from the confines of suburbia, mother and daughter talk a lot more, though it’s apparent that Paula’s strong will and Carrie’s “hothouse flower” personality don’t mesh. Carrie’s persona is similar to that of Mabel in Cassavetes’ A Woman Under the Influence, although Carrie stifles her pain rather than act out as Mabel does.

The car sputters out by desert diner/filling station inhabited by   Jones (Gig Young), a grizzled loner who lets Carrie & Paula take up residence in the diner. (He sleeps in a trailer on the property.) The trio become friends/verbal sparring partners. Nickerson (who later went on to play Violet in Willy Wonka) steals the movie in the pivotal role as Paula. Jones teaches her how to drive his truck, and she zooms all over the property while Jones and Carrie watch. The adults begin a friendship that slowly develops into something deeper, as the outgoing Jones draws Carrie out of her shell.


The neon ceiling referred to in the title is a collection of road signs and neon art  in the diner basement. Jones has collected and fashioned these signs through the years. Carrie and Paula are enchanted by the neon, and stay in the desert for several weeks. Paula even talks the way into working as a waitress in the diner while her mother develops a joy for living she lacked back home.

Directed by Frank Pierson ( who wrote Dog Day Afternoon and Cool Hand Luke ) and written by Carol Sobieski based on one of her short stories, The Neon Ceiling is one of those blink and you miss it movies that lives only in the memory of those who watched it in its initial TV run. Viewers have fond, nostalgic memories of it; there are several positive user reviews on IMDB from mostly female viewers who remember it vividly from its original airing. That’s unusual for a TV movie that hasn’t been screened anywhere (to my knowledge) since the early 1970s.

Lee Grant won an Emmy for her portrayal of Carrie Miller. Gig Young was nominated for an Emmy for Outstanding Single Performance by an Actor in a Leading Role, and the film was also nominated for Best Editing and Cinematography. The Neon Ceiling is a good time capsule of the social and moral climate of the late ‘60s and early ‘70s.  Some the dialogue is wince-worthy in 2012, though, such as the scene where a family doctor wonders why Carrie and her hubby only have one child. The film isn’t a good candidate for DVD release, but it’s currently available on YouTube (see video below), along with other ABC Movies of the Week. 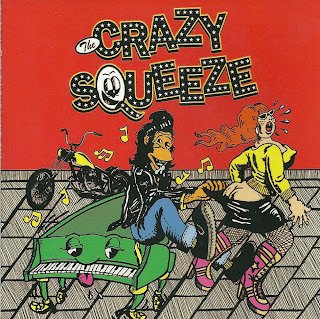 The 13 songs on The Crazy Squeeze self-titled debut CD (Vinyl Dog) are pure and rowdy rock ‘n’ roll  This L.A. band blasts its way through  a blend of glam and punk, alternatively drawing inspiration from Eddie and the Hot Rods, the New York Dolls, Mott the Hoople and the Boys.

Boozy rockers like Little Girl, All Lies and Outta My Head are on tap here from start to finish. Younger Girl and C’mon and Dance bring to mind the buoyant pop sounds of ‘60s AM radio hits. Every song on this CD is a winner, right down to covers of the Boys' Terminal Love and Cock Sparrer’s I Need a Witness For great glampunk songs with swagger & personality, check out The Crazy Squeeze. 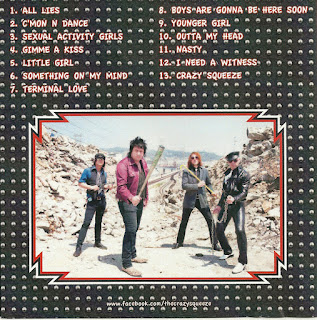