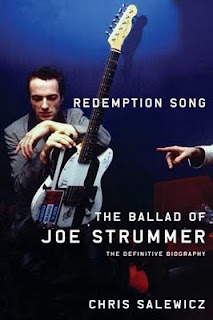 This 627 page bio of Clash frontman Joe Strummer seems like a daunting undertaking even for a loyal fan, but it's actually an easy to read  if you have the time. Author Chris Salewicz, a friend of Strummer's, wrote Joe's obituary for The Independent, and spent the next few years writing and researching Redemption Song. The book answers lots of questions about him and humanizes a complex man. Certain punk legends like John Lydon, Debbie Harry, Patti Smith , Joey Ramone, et al, could be encapsulated in a phrase or blurb. One could sum up their personas as combative, ice queen, poet, heroic misfit, and so on. Despite all the information in Redemption Song, Strummer still remains somewhat of an enigma, so it's hard to pinpoint a phrase to describe him even after finishing this hefty book.

We learn that that his father was a diplomat and the family lived in several different countries, including Egypt, and that his brother committed suicide as a teen-ager and Joe found his body. There are lots of anecdotes to pique the memories of older punk fans (Paul Simonon was married to Pearl Harbor of & Explosions fame, for example). There's a pic of a crude drawing of a chord chart Joe used when he first learned to play the guitar, and an account of the first time he saw the Pistols play at the Nashville. (They opened for the 101ers). And there's pesky Clash manager Bernie Rhodes, alternatively guiding the band and undermining them. There's no strategically placed denouncement or rush to christen Strummer with a label. Written by a friend without an agenda, the book is void of pretension.

Redemption Song, along with the Julien Temple documentary The Future Is Unwritten, gives us an incredible amount of material on Strummer's life. Redemption Song draws a picture of a complicated man, neither cartoon or tragic figure, who just happened to be one of the icons of the punk rock era.

(This review first appeared on the Punk Rock Demonstration website in September 2007).
Posted by JadeB at 3:14 PM No comments: