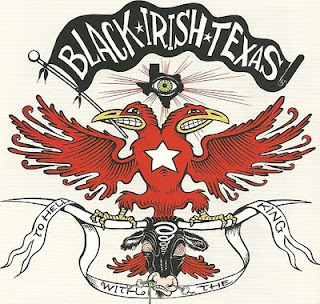 Black Irish Texas
To Hell With The King (Jameson Irish Whiskey)
Black Irish Texas hails from, appropriately enough, Austin, Texas and they’ve been playing their own high-energy, smart-ass brand of Celtic rockabilly since 2004. On To Hell With the King, their debut CD, they commit some of that Irish rock mayhem to disc. They’ve shared stages with the Dropkick Murphys, the Street Dogs and their fellow Texas hell-raisers, the Flametrick Subs. Ya can tell a tongue in cheek sense of humor is an integral part of the band’s raison d'être from the lyrics of their first song “Get ‘Em Off”--.”Forget your Catholic morals, girl/ you and I belong in hell” Their wild get off your butts & mosh (or dance til you drop) sound infiltrates all eleven songs on To Hell With The King. And while you’re moving around the room, work the brain cells a bit cuz the lyrics are some funny shit. (Bonus Point—a Hot Rod Lincoln-esque interval in the middle of the title track.)
Black Irish Texas website
Posted by JadeB at 11:18 AM No comments: