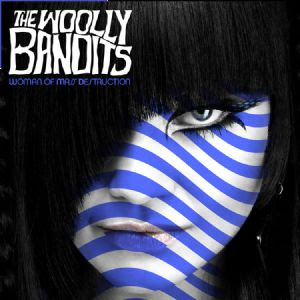 It’s hard to lump the Woolly Bandits in with other garage rock or retro psychedelic bands. Their new CD Woman of Mass Destruction (Citation Records) elements of many genres, more of a theatrical version of garage rock/psychobilly, psychedelic rock, surf, you name it, but it’s a BIG sound, not the pared down sonic noise associated with garage bands. This quintet takes full advantage of every band member’s talent, and blends it into twelve bouncy and entertaining songs. The Woolly Bandits got their start as the backup band for ‘60s psych-rock legend Sky Saxon. The Bandits’ bass player and spokesperson Rik Collins says, “This line-up has only been together eight months. It’s kind of a mutt the way the band started. We’re kind of like a bastard band. It started when I was playing with Sky Saxon.” Rik says. At the time, Arthur Lee (of “Love” fame) was touring with a young band backing him up, and Rik convinced Sky to follow suit. Sky and his back-up band went on to record an album and do several European tours. “I was the manager, bass player, musical director, and booker cause Sky was an old friend of mine I met in the late 80s, early 90s”, says Rik. Sky’s back-up band soon struck out on their own. The first incarnation of the Woolly Bandits imploded after recording an album called Say Hello to My Little Friend in 2005. Then fate intervened and Rik met powerhouse vocalist/future wife Christa, keyboard player Johnny “Keys” Langdon, and guitarist Tracy “Skull” Garcia. That left the usually hard to fill drummer position. After auditioning several drummers and turning up empty-handed, the band finally recruited Rikki Styxx through a mutual friend and the Bandits’ current lineup was complete. On Woman of Mass Destruction, this Inland Empire, California based band takes the garage rock/ psychedelic sound of the Seeds and embellishes it with a bit of Cramps psychobilly. Then they add a pinch of Hollywood a Go-Go theatrics for a complete rock ‘n’ roll experience that’s great on CD and even better live. The Woolly Bandits show is a full-throttle, Farsifa filled shindig, complete with Christa’s frenetic stage persona and occasional appearances by go-go dancers. Woman of Mass Destruction is garage rock, it’s mod, its frugging ‘60s fun, it’s sexy, it makes you wanna shake your booty. Each song has its own flavor. “Devil Doll Stare” sounds like X because that’s what the band was going for, according to Rik. As he and Christa trade off vocals ala John and Exene.”Watch Your Step” is punctuated with hiccup-y Dale Bozzio vocals, while the thrashy breathlessness of “Devil’s On My Back” keeps you waiting for the next surprise. Xylophone and a Vox Jaguar organ underscore the flirty “Cambodia Girl” And the CDs closer is a cover of the Specials “Gangsters.” Sounds like the Woolly Bandits have it all down -and then some. Woman of Mass Destruction is available from the Citation Records website
Posted by JadeB at 12:11 PM 2 comments: