Book Review: Foxy: My Life in Three Acts: A Memoir By Pam Grier (with Andrea Cagan) 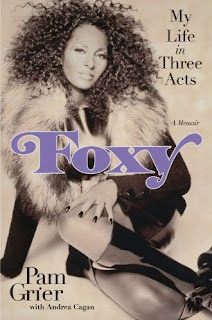 
Iconic actress Pam Grier is famous for her roles as tough, ass-kicking Coffy, Foxy Brown and for her comeback film role in Quentin Tarantino’s Jackie Brown. The road to those iconic performance was hard and involved lots of hard work, sacrifice and heartache. Grier ‘s autobiography “Foxy-My Life in Three Acts (co-written with Andrea Cagan), exposes the back-story that lead to her career.

An Air Force brat, Grier’s family lived in Colorado, where dealing with prejudice was a daily occurrence. When officers found out that her father, a light skinned African-American, was Caucasian, her family was relegated to living in cheaper quarters and riding public transportation (when the driver would stop to pick them up). While Grier had a supportive and loving network of relatives, problems bubbled underneath the surface. One of her aunts was a closet alcoholic, and her father left her mother and remarried, unable to accept the fact that Pam’s mother earned more money than he did. Left alone in the house one day, at six years old, a group of local boys raped Grier. After that, she went out of her way to disguise her good looks and developed a stutter. She was raped again at 18, by a family friend, and retreated further into her shell.

While working part-time at a radio station, one of her co-workers suggested she enter a local beauty pageant. Shortly thereafter, she moved to Los Angeles, working several jobs while hoping to break into acting and film. She met the first of her famous boyfriends Kareem Abdul-Jabbar, then known as Lew Alcindor, and their relationship blosommed-untol he converted to Islam. Unsure of the way his new religion treated women, Pam wavered on accepting his marriage proposals. He eventually married a Muslim woman who had been chosen for him.

Pam was flown to the Philippines for her  first B-movie role in The Big Doll House to fight and tousle with other actresses  in a “caged heat” type movie. This lead to a string of  exploitation roles like Black Mama White Mama and Coffy, which began her reign as queen of blaxplotation films.

She dated two of the biggest and most troubled comedians of the 1970s, Richard Pyror and Freddie Prinze Sr. Freddie was “a great love of my life” she writes. After meeting him when they appeared together on the Irv Kupcinet show in Chicago, they began dating and had a whirlwind courtship. Once Freddie’s fame escalated, so did his ego and cocaine use, and Pam broke up with him after disagreements about whether or not she should get pregnant. She lived with Richard Pryor, hoping to help him get off drugs, but that relationship ended soon after a gynecologist told her she had a buildup of cocaine on her cervix due to his drug use.

While her love life faltered , Pam’s career flourished, with her signature role as Foxy Brown and a supporting role in the miniseries Roots. She hung out with John Lennon and Harry Nilsson during John’s infamous “Lost Weekend” in Hollywood, co-starred in Fort Apache, the Bronx with Paul Newman and guest starred on Miami Vice.

Grier’s dedication to the acting craft is demonstrated in her audition for the role of a drug-addicted hooker in Fort Apache. Using tips learned from her favorite book The Actor Prepares by Constantine Stanislavski, she arrived at the audition for the role of crack whore Charlotte in character, dressed in a dirty Mickey Mouse satin jacket, with greasy hair and a healthy dose of “motherfucker” sprinkled in her speech. She got the part.

Throughout the 1980s and 1990s, Pam had supporting roles in several movies and TV shows and acted in Sam Shepard’s play Fool for Love in Los Angeles. She was diagnosed with cervical cancer, and successfully battled it with the help of Chinese medicine. Her acting career was revived after Jackie Brown. She enjoyed full-fledged success on the Showtime series The L Word as nightclub owner Kit Porter. After enduring the deaths of family members, her good friend Minnie Ripperton, and a few more ill-fated relationships, she now lives in Colorado and operates a non-profit organization, the Pam Grier Legacy Fund, to benefit women, children and animals.

Foxy is more than a typical Hollywood autobiography. It’s the story of a strong-willed woman who overcame several obstacles that would have permanently roadblocked weaker females. There are some great lessons in Foxy for young women starting out in their careers, and even for older women who are going through rough times.