A Little Bit Me, A Little Bit You: The Monkees from a Fan’s Perspective : Interview with Author Fred Velez 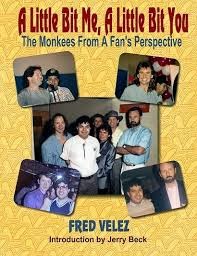 Fred Velez’s book, A Little Bit Me, A Little Bit You: The Monkees from a Fan’s Perspective, recaps his journey from childhood Monkees fan to  achieving every loyal fan’s dream of meeting- and occasionally working with-  his idols.  He’s also a blogger at Monkees.net and emcee at various Monkee-related events. A loyal fan since he first heard the Monkees’ music in the 1960s, he’s followed the group and their solo careers through the lean days of the 1970s to the 1980s MTV revival and onward to the current day.  I spoke with Fred a few weeks ago about his experiences as a Monkees fan and his new book, which is available on Amazon.com.


How did you first discover the Monkees?

I’m a first generation fan and I got to hear their music first on the local Top 40 radio station where I live in the New York City, so I had WNBC and WMCA And stations like that. I heard the music first without even seeing the TV show. I liked the songs Last Train to Clarksville and, I’m a Believer Later I discovered the same guys who were singing these songs had a TV show. I didn’t realize they were on TV right away. I used to watch Gilligan’s Island, which was on at the same time as the Monkees.  I never forgave Gilligan for a long time! 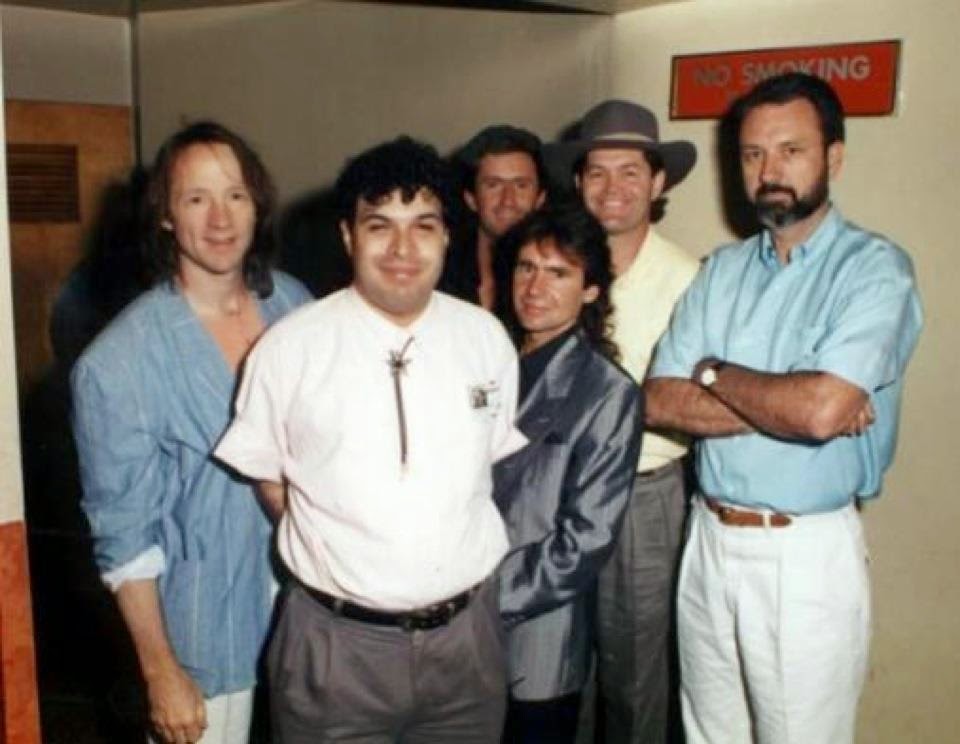 When did you first meet the Monkees?

I was fan from ‘67 til  the point where they broke up in 1970. (After that)  I found out about their exploits through teen magazines. I kept following what they were doing -   Michael  Nesmith when he went solo and collecting all of his records and Davy with his solo projects and I did my best to find out about Micky’s solo projects and get his records.  Peter was out of the picture for a long time.

I actually got to see them for the first time live  in 1976 when Micky and Davy united with songwriters Tommy Boyce and Bobby Hart performed as Dolenz, Jones, Boyce and Hart They played inside the Riverboat (Nightclub) in New York City. I think it was the first time I got their autographs personally. I didn’t get to really know them yet.

Peter didn’t get back in the limelight until 1979, 1980. I saw him in a few clubs in the 1980s in New York City. He appeared on the Uncle Floyd Show, a take-off on the old-time kiddie shows of the 1960s.  unce Floyd used to have lots of performers on this show.  including the Ramones and Jan and Dean. Peter made one of his early comeback TV appearances on the Uncle Floyd Show.

I had friends who worked on the Uncle Floyd show and they told me about Peter’s second appearance there and came up to the studio to meet him. I got to meet Peter and get to know him for the first time there. I appeared on the show with him and Uncle Floyd and showed off my Monkees memorabilia and Peter was very supportive and we’ve had a rapport since then.

Davy, I got to know on a more personal basis in 1984, when he made a trip to New York City on the QE2  with his then wife Anita and young daughter Jessica. Maggie McManus, who did the Monkee Business Fanzine.  I was a writer for (Monkee Business) I had connected with Maggie in the late 1970s, early 1980s and started writing articles for her magazine. Maggie arranged for Davy to appear on some TV shows in New York -  The Today Show and Regis Show.  She asked my advice for other shows, and I recommended Uncle Floyd because I knew Peter had been on it. I knew people on the Uncle Floyd Show, so I got in touch with them, so Davy made appearances on the Today Show, Regis Show and Uncle Floyd Show. We had the audience on the Uncle Floyd Show in Monkees hats.  So that’s where I got acquainted with Davy.


Didn’t you work on a book with Davy?

Yes I did.  In early 1990-91, I was  working on a job I wasn’t very happy with and I took a chance and sent Davy a note asking if he was looking for an assistant or anything like that, I’m available. I mailed it off and thought, well, I don’t know if I’m going to hear from him or not. And then a few weeks later, I’m in the other room watching television I hear the telephone in my other room ringing and I let the answering machine pick up. Once I got to my room,  I turned on the machine to hear the message, and it was Davy saying “Hey, Fred, I got your note.  If you’re interested in working on a project, give me a call.”

After the initial shock, I gave Davy a call He was working on his book Mutant Monkees with his partner at the time Alan Greene and asked if I wanted to help out. He wanted to get a fan’s perspective on some things that fans might want to see in the book.  So I made arrangements to met Davy in (his home in) Beavertown, PA.. Davy’s partner Alan Green picked me up and I stayed at Alan’s house.  Then we went to Davy’s house and  Davy gave me a rundown of what he wanted - random catchphrases  like “Save  the Texas Prairie Chicken” and “You must be joking.”  And then Davy pulled out this big trunk in his living room and said “Fred, you look through here and check and see if there’s anything here you think we can use for the book.”

I was looking through there and I thought “Wow! I’ve died and gone to Monkee heaven!” It was full of personal memorabilia, photo albums full of fantastic photographs, of his time with the Monkees and solo, pictures of Davy with Pete Townsend, Barry Manilow and people like that. I went to the photo album to pick out photographs, including pictures of behind the scenes from Head.and wardrobe photographs.  I was only there a day, day and a half because I had to get back to New York. Davy was grateful for my help on the book. He wanted to get a fan’s view of what they wanted to see in a book. The book came out about a year later and he sent me a signed copy of the book, which I was very happy about. I was thrilled to see my credit in the book, that I had added a contribution to it. I was very proud of my association with Davy in that regard.

The book is out of print, but you can find it on eBay or under Other Sellers on Amazon.

For years, a lot of friends and colleagues knew about my experiences with the Monkees working with them and on Davy’s book, interviewing them on stage at various conventions, introducing them on stage, and they said “Fred, why don’t you write a book about this stuff.” I’d think “Yeah, I’m busy with other stuff,    But I had in the back of my mind I had this book in me and I needed to write it one day. And then after Davy died, I wanted to share these stories before they disappeared.  I started putting together notes and finding memorabilia and photos I wanted to use for the book.  I started the physical writing in June, July 2013 and I finished the final chapter in January 2014.   I got the book self-published it and it was ready in time for the March 2014 Monkees Convention. 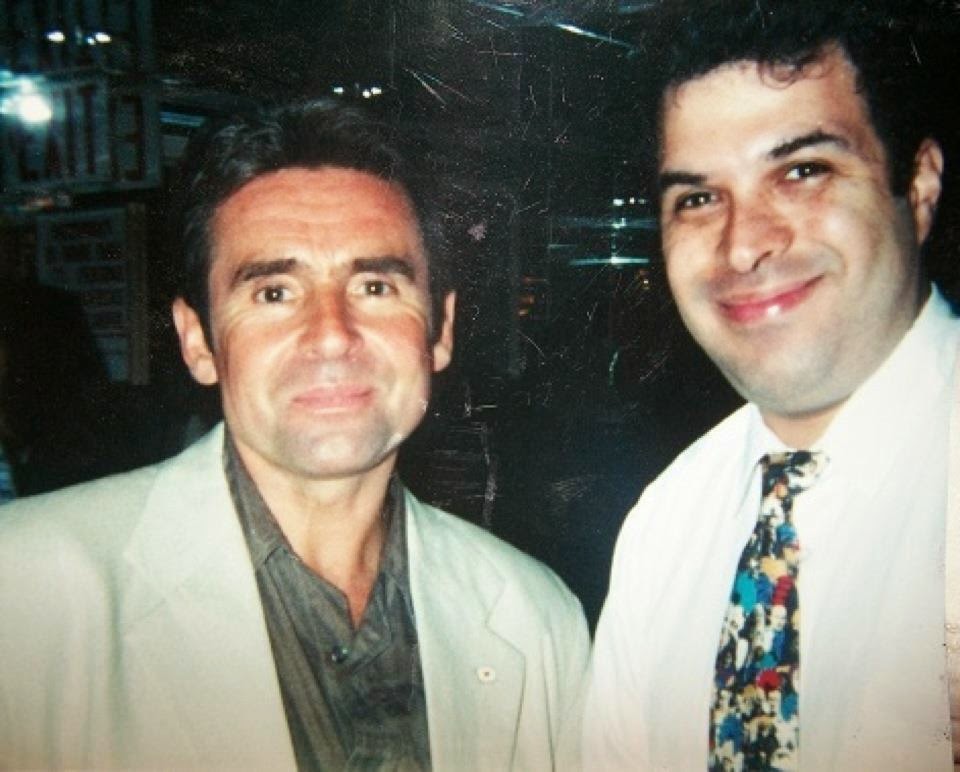 How was this year’s convention?

This past Monkees convention, Mike was more involved. He did a Q and A onstage, he signed autographs and memorabilia for the fans, and he did his Movies of the Mind Concert at the convention. I’ve seen Michael Nesmith in concert many times, and this was the best I’d ever seen him.  He was totally animated and having a great time got feedback and love from the fans and it showed in his performance.  It was one of the best Michael Nesmith performances I’ve seen. 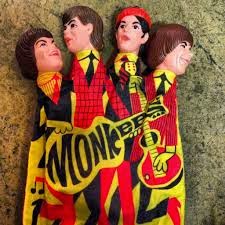 What is your favorite Monkees memorabilia?

One of my favorite pieces is the Mattel Monkees hand puppet. I remember that back in the ‘60s. I wanted to get that then. But I did get it later on at a memorabilia show- not too expensive.  And it’s a nice little piece.  We got a photograph of ourselves in present time with it when we did the 1980s Monkees Convention.

The second most favorite piece is an original 1965 Davy Jones Fan Club button before the Monkees when Davy was a solo artist and had a fan club.   I wore that button when I met Davy at the QE2 and the Uncle Floyd Show. And I’ve wore it to many different Monkee events – to conventions and I’ve worn it to the Davy Jones Memorial at BB King’s in 2012.

My 2nd favorite is an original 1965 Davy Jones Fan Club button before the Monkees he was solo artist I wear that button to the QE2 and to  Uncle Floyd’s memorial for Davy in 2012. So it was a personal piece because of the connection with Davy on that.

Peter Tork is the one who arranged to get that photograph done. I knew the photographer Mike Bush and Helen Pantuso, who helped get the Monkees their star on the Hollywood Walk of Fame. She was one of the people who got the campaign rolling.  She had me as part of security at the Hollywood Walk of Fame Ceremony. We went inside the theatre with the Monkees waiting until they were called to come outside to accept the star. And I was walking with Peter, saying hello to Mike and Micky and Davy (as we walked outside) Mike Bush was taking photographs and said, “Excuse me, but you’re in the photograph.” So I said “Oh, sorry,” Peter Tork grabbed me by the arm, pulled me back in, and said, “Fred, you stay in the picture,” So I got my picture taken with all four Monkees. And the look on my face is “I can’t believe I’m in this photograph.” I’ll always thank Peter Tork for that. Later on, I did get the picture signed by Peter, Micky and Mike. Unfortunately, I never got it signed by Davy for various reasons. I have a big regret about it. At last year’s  Beavertown Memorial for Davy (2013), all four of Davy’s daughters were there, and I had them sign it. So the picture has a more personal meaning because it has the three Monkees and the four signatures of Davy’s daughters.

My favorite Monkees song is “While I Cry” from Instant Replay. My favorite song that Michael Nesmith wrote and recorded with the Monkees.  My favorite episode of the TV series, bar none, is “The Devil and Peter Tork” Each of the Monkees, especially Mike and Peter, had a rare opportunity to do some really fine acting. It’s the best episode they ever did.