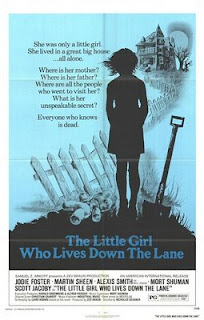 Following roles as a prostitute in Taxi Driver, and a heavily made up gun moll in Bugsy Malone, the prepubescent Jodie Foster seemed doomed to portray trollops on her way to adulthood. But before Jodie played the uber-intelligent mother hen to a bunch of wayward teenage girls in Foxes, (1980), she shed the pre-teen vamp look in a relatively unknown film called The Little Girl Who Lives Down the Lane. Foster portrayed Rynn Jacobs, the quick-witted, independent daughter of an English poet. She’s 13 but she talks and acts like an adult, and lives alone in a big house with her hamster. Her father is no where to be found, and she hides this fact from the snooping landlady, Mrs. Hallet (Alexis Smith) and her creepy, pedophile son Frank (Martin Sheen), who has a rep around town for hounding young girls. It turns out Dad committed suicide and made financial plans for Rynn to live alone in a rented house in New England after his death. Based on a novel by Laird Koening, who adapted it for the screen, the film played briefly in theaters in late 1976/early 1977. Rynn spends her time studying Hebrew, cooking and listening to classical music and has little contact with other humans. In the opening scene, Rynn walks over a bridge one crisp morning. Despite the lovely coastline scenery, there’s a tense melancholy emanating from the screen. Somehow we know from the opening shot no one’s going to live happily ever after. Mrs. Hallet needs her jelly glasses from the cellar but Rynn won’t let her downstairs. She’s hiding another secret. You guessed it-there’s a dead body down there. It happens to be Rynn’s evil Mum, who paid a visit to in search of her ex-husband and fell victim to Rynn’s ultimate revenge. But our anti-heroine does have pleasant contact with other residents of the small town. Officer Miglioriti (played by Mort Shuman, who was also the film’s music supervisor) pays friendly visits to check on Rynn. His nephew, amateur magician Mario (Scott Jacoby), befriends Rynn and they become romantically involved. (Yes, they go to bed together.) This shot was the deal-breaker for Foster, who refused to do a brief nude scene. Her older sister Connie served as a body double. The nude scene is one of the reasons Foster reportedly dislikes the film. Funny how another 1970s film, Blue Collar, yanked from DVD release after a few years, also incurred the wrath of one of its' principals, director Paul Schrader. This seems to be a trend with films not currently available on DVD. Hmmm.. Little Girl, initially promoted as a horror film, has no gore and has more of a thriller/murder mystery vibe. The performances drive the film here; Jacoby and Foster make a likable teen couple during their few brief scenes together; the viewer will definitely root for them to stay together and thwart the abhorrent Sheen and his nosy mother. Sheen played a lot of edgy roles quite convincingly in the 1970s (Badlands, Sweet Hostage with Linda Blair), before becoming renowned for Apocalypse Now and his political activism. Frank’s sly manipulation of Rynn turns into downright cruelty by film’s denouement. Clue: by the end of the movie, she doesn’t have a pet hamster anymore. The enterprising Rynn, however, has the last laugh. The premise of a 13 year old living alone in such toney circumstances seems preposterous even today. Imagine what it seemed like in 1976! But Foster does it so well, we suspend disbelief. Of course, if someone made an updated version of this movie, the protests would have it shelved before the first showing. A 13 year old girl living alone! Where’s child protective services? Or perhaps Rynn would be a masked, young female version of Freddie or Jason, systematically murdering the town’s inhabitants. *Sigh* I miss the unchecked subtlety and creativity of 70s cinema. The Little Girl Who Lives Down the Lane had many different VHS and DVD covers, lobby cards and posters during its release.
Posted by JadeB at 5:49 PM No comments: 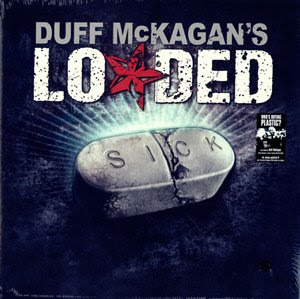 
I just finished reading Greg Prato’s excellent book “Grunge is Dead: The Oral History of Seattle Rock Music” and Duff McKagan is quoted liberally in the first few chapters of the book, along with the usual Pearl Jam and Nirvana crowd. Seattle native McKagan played in local faves Ten Minute Warning and the Fartz, plying his skills as a punk rocker before moving to L.A. After GNR, he moved back to Seattle and earned a finance degree from Seattle University. He's currently a financial columnist for Playboy.com and is on tour with his Seattle-based band Loaded.

Now that Velvet Revolver has imploded, Duff is back to his Seattle punk/metal roots. Sick, Loaded’s third CD, is better than McKagan’s post GNR solo CDs and a notch above the other Loaded releases. The 13 songs on Sick remind us that McKagan, along with Izzy Stradlin, were the no-frills bluesy, rocking heart of GNR. Axl added bipolar showmanship , horn sections, and psychodrama; Slash contributed guitar histrionics, but Duff and Izzy were the core of that band.

Sick is just a simple hard rock album, and that's a relief amid all the subgenre death and thrash metal that leave the basic metal fan out in the cold. Duff plays guitar, not bass, and sings lead. He’s got a raspy voice that’s fine for the material here. The tunes have heart and sleaze without going overboard in either direction. There's the obligatory heartfelt ballad IOU, an apology to his wife for putting her through rock ‘n’ roll hell, the pensive Mother's Day, and lots of songs about past encounters with skanky broads and backstabbing friends. “Sick” kicks off the CD with the line "“Well, I’m sick/Yeah, I’m sick of you/You’re like Typhoid Mary/Mixed with Asian flu.” It's safe to say Duff's lyrics won't be quoted on any Hallmark greeting cards soon. The unabashed rockin’ continues with Sleaze Factory, Blind Date Girl and Duff’s take on Use Your Illusion’s Coma, called Flatline. So all the required rocker subject matter is here.

The band’s name is officially Duff McKagan’s Loaded, at the record company’s insistence. Name brand recognition and all that. If you liked Duff’s contributions to GNR,Velvet Revolver (& the Neurotic Outsiders!), you’ll like Sick.