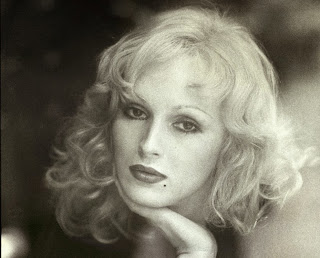 Candy Darling, Warhol superstar and one of the subjects of Lou Reed’s 1973 hit Walk on the Wild Side, fulfilled her dream of becoming a “movie star”, but in quite a different way than the Hollywood stars she idolized as a child. Along with Warhol’s other “chicks with dicks”, Holly Woodlawn and Jackie Curtis, Candy brought the drag/trans underworld out of the shadows and into the gossip columns.  Candy Darling: Memoirs of an Andy Warhol Superstar traces Candy’s journey from Massapequa Park to Manhattan and Warhol’s Factory in her own words. This short book is a collection of journal entries and stream of consciousness tidbits compiled from Candy’s notebooks.

Born in Long Island as James L. Slattery, to Theresa and Jim Slattery, young Jimmy was an outsider in cookie-cutter suburbia as a child. His mother Theresa worked for the phone company and divorced his father, an abusive alcoholic, when Jimmy was in grade school. Young Jimmy poured over movie magazines and idolized the female stars of the time, especially Kim Novak. There are a few journal entries from his school days,(“I am in homeroom now. There’s a bunch of chicks in here but they all hate me. Someday I’ll be a movie star and that’s it! I’ll be rich and famous and have all the friends I want.”) He studied cosmetology and eventually made his way to Manhattan, where he underwent hormone therapy.

Now recreated as Candy Darling, she frequented gay bars and eventually met Andy Warhol. Warhol cast her in Flesh and later Women in Revolt aka Sex. After a few theater credits (Tennessee Williams wrote a part in one of his plays for her), bit parts in the mainstream films Klute and Lady Liberty followed. Candy never got the film role she  wanted most of all though – Myra Breckenridge. She passed away at 30 from lymphoma, as a result of the estrogen injections she received.

Candy Darling’s preface, written by documentary filmmaker James Rasin (Beautiful Darling: The Life and Times of Candy Darling, Andy Warhol Superstar) and a introduction/setup by Candy’s friend Jeremiah Newton, familiarizes us with the subject. The entries from Candy’s journals include make-up tips, shopping lists, recipes, and letters to friends. Candy writes about her struggles with identity, ambition to become a movie star, and the heartbreak and loneliness of being a transsexual. (She appears not to have any great love of her life). Despite her status as a Warhol superstar and fixture in the backroom of Max’s Kansas City, she had no money and slept on friends’ couches. Being a New York cult figure in the ‘60s and ‘70s made you famous; it didn’t necessarily make you rich.

“They don’t show love in movies anymore, just sex and violence. A man and woman are no longer idealized in pictures but they are shown as a couple of dogs in heat. ” – Candy Darling 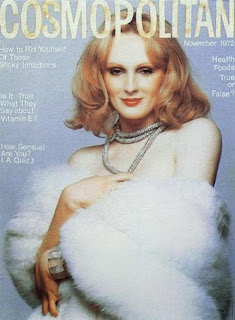 Unpublished photo of Candy on the cover of Cosmo

Candy channeled her childhood idol Kim Novak and added a bit of Marilyn Monroe’s vulnerability to her persona. She exuded femininity and charm;when she was fully made-up and “on” strangers had no idea she had been born a man.

Did anybody really know what a transgender person was in the early ‘70s? That’s probably one of the reasons Walk on the Wild Side became a hit. The public at large didn’t know (or didn’t care) what the lyrics meant.

Well, maybe some people did. My Mom took me aside and asked me if I knew what Walk on the Wild Side was about. At 13 years old, my girlfriends and I knew the song’s meaning even without the media telling us – and we didn’t even know any gay people. Maybe all those underground zines we got through mail order enlightened us.

It was quite a different world 50 years ago. Now we have Bruce Jenner, Chaz Bono and transgendered teens constantly profiled on Yahoo news next to baseball scores. Back in the day it was a different story, as Candy Darling’s colorful but tragic tale attests.