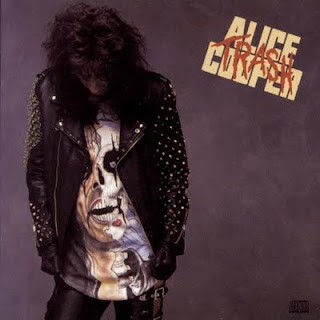 Hair metal was to the late 1980s what disco was to the 1970s - an all-pervasive and hot selling musical form that has since been discounted (save for a few exceptions) as worthless muck  It seems every band in the late ‘80s had long hair, used Aquanet and wore pastel spandex. If you don’t think it was that bad, look here.
While the hair metal craze conjures up images of pouffy-haired boys in pink spandex and such, the basic musical tenet of the genre –melodic hard rock – is an enduring rock ‘n’ roll staple. One example of hair band era melodic hard rock done right came courtesy of an unlikely source. Alice Cooper’s 1989 album Trash was Alice’s spin on the melodic hard rock/hair metal era, and it gained him mega-chart success for the first time since 1975's Welcome to My Nightmare went platinum. Alice had succumbed to alcohol and poorly-conceived albums for most of the 1980s. Trash was his comeback. He took his tongue-in-cheek sense of humor and theatrical persona and merged it with a series of finely crafted hard rock tunes, and the result was an album that peeked at 20 on the U.S. charts.
Alice enlisted songwriter and Bon Jovi producer Desmond Child and an all-star cast to record the album. Contributors included songwriter Diane Warren, Aerosmith, Joan Jett, Stiv Bators, Kane Roberts, Jon Bon Jovi, Richie Sambora, and of course, guitarist Guy-Mann Dude. In keeping with the spirit of the times, Alice temporarily abandoned horror schlock lyrics for soft-core sex and S and M, the required subjects of the day. Trash featured the power ballad Only My Heart Talkin' with Steve Tyler on guest vocals; the kinky S & M song Bed of Nails, co-written by Diane Warren; the title track (an ode to groupies at L.A.’s Cathouse)  and House of Fire, co-written by Joan Jett.
The hit single Poison had the obligatory video with Playboy Playmate type models, as did Bed of Nails. But since Alice was the narrator, the presentations had that hint of danger and malevolence to them. If Kix or Poison did the same video with the same models, it would simply be bad soft-core porn.
It was fun to see Alice on the MTV Music Awards in 1989, on the same stage with Guns and Roses and all the hard rock bands who had been influenced by his music. OK, so maybe Alice was just slumming with Trash, but he obviously had a good time doing it. Trash is just a footnote in Alice’s legacy, but it’s smirky, smutty fun. And it’s a good way for former ‘80s metal fans to pay homage to their Aquanet days without embarrassing themselves by digging out that old Warrant CD.