We’re not sure what to make of Jordin Juarez (E.J. Bonilla), a high school “playa” in Los Angeles. He's constantly in trouble in the classroom and on the playground when we first meet him. Jordin is handsome and charismatic, but has no positive outlet for his energy. When strict but well-meaning teacher Miss Ruiz (Jennifer Esposito) gets him suspended, his week off turns into a journey of self-discovery. His new friend, Felipa Talia (Veronica Diaz-Carranza), an honor student, joins him in his quest.

The film deals with several intertwining family dramas. Felipa and Jordin forge a relationship in spite of, or perhaps because of, these intrigues. Jordin accidentally discovers some long-hidden secrets about his Mom, who died in childbirth. Felipa has her own issues: her mother has mysteriously vanished from her life. Originally from New York, she lives with her aunt, uncle and boy-crazy cousin Kika (Kimberly Burke) in Echo Park. The bookish Felipa seems nerdy, but she turns out to be quite feisty and confronts Jordin after what she perceives as a diss. Mamitas concentrates on Jordin and Felipa’s budding friendship and subtle flirtations at the beginning of the film, but there’s much more to the storyline than young love.

Felipa endures heartbreak caused by her M.I.A. Mom and deals with life as an educated misfit in a world of hip-hop music, thug wannabes and short-skirted party girls. A fight with Kika is at once funny and all too true as Felipa is driven to her breaking point by her cousin’s ongoing cattiness.

Mamitas integrates the L.A. Hispanic experience into the film’s fabric instead of presenting ethnicity as the focal point. All thhe touchpoints of life for a Latino teen in L.A. are here, though - the hip-hop party, the local slut, fights on the basketball court - and the obligatory lecture by the school counselor about going to college.

The cast, a combination of veteran character actors and young novices, work together flawlessly. Alex Fernandez, as Jordin’s widower father, Alvaro, works hard to give Jordin and his brother Hector (Jesse Garcia) a good life. But dealing with his rebellious younger son isn’t easy. Alvaro and Jordin remain emotionally estranged for much of the film.

Offhand appearances by writing teacher Alexander Viera (Joaquim de Almeida ) and Jordin’s rascally but wise grandfather “Tata” (Pedro Armendáriz Jr. ), add some colorful sidenotes to Jordin’s journey. There’s a distinct likeability and ease to the performances that make viewers identify with all of Mamitas' characters, from the main characters down to the supporting cast. Mamitas portrays the lives of L.A.'s Latino families from an inside perspective, not from the typical outsiders' eyeview of drugs, gangs and other sensationalistic subjects. 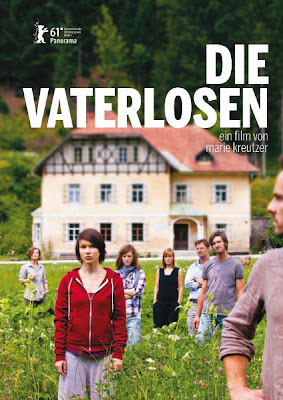 Austrian director Marie Kreutzer's The Fatherless (Die Vaterlosen), one of the films entered in this year’s Los Angeles Film Festival’s narrative competition, explores how children raised in a totally unstructured environment can suffer as much emotional damage as children brought up in an authoritarian household. Four siblings converge on a isolated house in the Austrian countryside after the family patriarch Hans (Johannes Krisc) passes away, with only his "adopted" physician son Niki (Philipp Hochmair) present when he dies. Through flashbacks, it’s revealed that Hans was the leader of a free-love hippie commune in the 1980s and fathered children with different women. He finally settled down with Anna (Marion Mitterhammer) who lived with him until his death.

The setup seems somewhat clichéd, as one by one, the rest of Niki’s siblings arrive at the house. There’s something off about these siblings – they hardly seem to recognize each other. During the first third of the film, it’s a little difficult to determine who the characters are and their relation to each other. Are they brother and sisters, half-siblings, friends, acquaintances? It’s hard to tell. The characters themselves aren’t even sure at first, and they open up to each other bit by bit.

The central story concerns estranged sister Kyra (Andrea Wenzl), who hasn’t seen her siblings for 23 years. She bears a bitter grudge against Hans, though it’s not apparent why at first. When Mizzi (Emily Cox) meets Kyra, she is anxious to learn more about her estranged sister.

The family spends a few days together while waiting for Hans’ funeral. Leisurely dinners and wine-laced chats soon give way to long-buried memories of chaotic scenes at the communal dinner table and Hans’ selfish motives. Idealistic brother Vito (Andreas Kiendl) takes over the house-repair duties, and his attempts to rally the family together meets resistance. Meanwhile, Anna’s altruistic demeanor cracks and she spills some secrets of her own.

Kreutzer' s meticulously paced script focuses on developing the characters as individuals. Enough information is revealed to keep us hooked until the siblings unravel several childhood mysteries, including the origin of Mizzi’s neurological disorder. All the usual props-scrapbooks, diaries, letters, even cassette tapes are employed to delineate family events. They’re subtle lead-ins to exposition that springs naturally from the characters.

The Fatherless examines the social and emotional effects of a communal upbringing on children. Instead of exploring the politics of this subject, the emphasis is on how such an atmosphere affects the individual. How did the parents’ freeform, laissez faire attitude shape the children’s identity and sense of family as they grew into adults?

The ensemble cast handles the emotionally charged material with aplomb. Wenzl gives Kyra just the right mix of willfulness, anger and composure. Portraying a character with such a complex history without going “over the top” was surely a hard task, but this young actress approaches it admirably. The rural Austrian landscape is lovingly photographed, in contrast to the VHS-quality look of the 1980s commune flashbacks. The Fatherless is an impressive debut from director Kreutzer, who approaches a difficult subject with sensitivity and skill.

*The Fatherless was filmed in German with English subtitles.

Read more: http://blogcritics.org/video/article/movie-review-the-fatherless-die-vaterlosen/#ixzz1Q4gOVyaz
Posted by JadeB at 10:53 PM No comments:

A radio announcer’s mellifluous voice pops up every so often as the brothers drive (and eventually walk) from bar to bar through Eau Claire’s barren streets. The announcer’s flat jokes are a perfect accompaniment to the snow-covered sidewalks, railroad crossings and clapboard houses that double as taverns. The geography of Sawdust City paints a land that is as desolate emotionally as it is physically.

The film has the potential to combine both pathos and humor, as most of the action takes place in bars. Comic relief appears in the brothers’ travels via a loquacious, money-strapped barfly named Gene (Lee Lynch), whose tales of his unseen lumberjack girlfriend provide most of the film’s chuckles.

The father in question is seen only through old photographs as Bob and Pete bicker back and forth about childhood events. As day turns into night, tensions flare between them. The combination of cold weather, too much alcohol, and exposed secrets drives Bob and Pete to their respective boiling points. A long shot of Pete walking along a snowy road near the end of the film exemplifies not only the bleak surroundings, but the stark reality of the brothers’ plight. While Bob alternates between logic and rage, younger brother Pete is an enigma for much of the film.

Well-acted and emotionally taut, Sawdust City is a compelling portrait of siblings entangled in a not-so-happy reunion. It’s an ultimately downbeat tale, to say the least, but indie film fans will admire its artistry. Sawdust City is an official selection of the Los Angeles Film Festival.