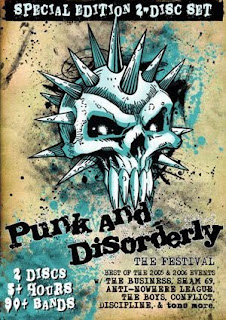 The Punk and Disorderly Festival, a three-day extravaganza featuring hardcore punk bands, mostly from the UK and Europe, takes place in Berlin every year. The Halo-8 DVD Punk and Disorderly, Vol. 1 chronicles the 2005 and 2006 fests with over five hours of highlights from dozens of bands. A few of the the main stage bands, like Anti-Nowhere League, Sham69, The Boys, and Eddie and the Hot Rods should be familiar to any self-respecting punk fan. And if you don’t recognize any of those names, the other bands may be waaaay too hardcore for you.

This two DVD set compiles professionally shot snippets from each band that performed at the '05 and '06 fests. Most bands get one featured song on the DVD, while some of the more popular bands, like Sham 69, have two songs each. This DVD doesn’t play favorites, representing main and second stage bands equally. Each DVD contains interviews with some of the bands.

Some background: An album called Punk and Disorderly released in 1982, sold well and was the impetus for the festival. The P & D fest formed officially in 2002 as an answer to other successful punk festivals across Europe and the UK like Holidays in the Sun. Next to the UK, Germany is a hotbed of European punk rock. Punk is to Germany as black metal is to Scandinavia, so Berlin was a logical home for the fest.

The first Punk and Disorderly disc carries a selection from the 2005 festival. Replete with stage invaders and glimpses of burly male fans in bright fanned mohawks (think of all the glue and egg whites used on those babies), this DVD has performances by a few legendary, but definitely underplayed, punk bands. There are two songs from The Boys ("First Time" and "Living in the City"). Anti-Nowhere League’s codpiece-wearing singer Animal growls “Nowhere Man" (not the Beatles song... far from it). Pub rockers Eddie and the Hot Rods, who paved the way for punk slightly before the Pistols, rock out with “Better Without You” and Chelsea’s singer, Gene October (Billy Idol and Tony James were in the original incarnation of this band) is in great voice.

The 2006 disc starts with Sham69 doing “Borstal Breakout”, but from there it’s strictly geared for serious moshers, with hardcore bands from all over the world, including Sweden’s Negatives and France's J’aurais Voulu. To dilute the nonstop moshing just a tad there’s some upbeat skanking and sax from Mark Foggo and the Skasters.

Displacing the myth that hardcore is an exclusively male domain, female singers make a few appearances on Punk and Disorderly. On the 2006 disc, Deadline singer Elizabeth Rose channels a bit of X Ray Spex along with Joey Ramone in her rendition of "Sheena is a Punk Rocker". In 2005, Chamblz of hardcore all-stars Chemical Kaos trades off vocals with dreadlocked Pop, and veteran Italian ska/oi band Klasse Kriminale are joined onstage by female singer Emanuela.

Punk and Disorderly is an acquired taste. It's very much geared towards longtime punk fans and new converts with an intense interest in the genre. There's so much material here, it may take a few sittings for even those fans to watch it all. The audio and video quality are also top notch, and the DVD menu is easy to maneuver, with separate listings for main stage and second stage bands.


Most Stones fans agree that Mick and Keef created their last perfect (or near-perfect) album in 1978 (Some Girls) or 1981 (Tattoo You). But Mick turned 66 last month and the boys-I mean grandpas-are still rockin'. The albums released in the last 28 years all have memorable songs on them, of course. The problem seems to be that the Stones post 1981 output dims in comparison to the band's '60s and '70s albums. Lotsa folks can name most of the songs off Let It Bleed, Exile on Main Street and the '60s hit compilation Hot Rocks. But how many songs can you name off Steel Wheels or Undercover?

Still, there are classic songs and videos from the '80s-'00s. Here are a few of my faves.

Mick & Keith weren't really getting along during this era, as evidenced (in a tongue in cheek kinda way) in this video.

With Patricia Arquette as an Edie Sedgewick type character. Directed by Michael Gondry.

Undercover of the Night