From the Archives: CD Review: William Shatner - Has Been 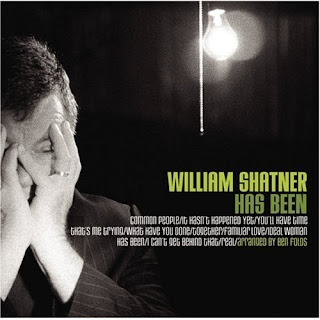 Has Been
William Shatner (with Ben Folds)
Shout Factory


The Transformed Man, William Shatner's first album, was recorded in 1968 during his first tenure as Star Trek's Captain Kirk. Like the original TV series, The Transformed Man, with its kitschy covers of "Mr. Tambourine Man" and "Lucy In The Sky With Diamonds", has remained a pop culture touchstone. Unfortunately, Shatner's first foray into music/spoken word has fueled many jibes from comedians and DJs over the years, while Captain Kirk is an accepted part of American, if not universal, folklore. Shatner's second album, Has Been, produced and co-authored by pianist/songwriter Ben Folds, is a bona fide CD, consisting of ten original compositions and populated with guest artists like Brad Paisley, Henry Rollins and Joe Jackson. Has Been tells the story of a man who has traveled through 73 years of ups and downs with self-deprecating clarity.

Has Been blossomed into a full-fledged project when Garson and Richard Foos, contacted Shatner and asked him to do an album for Shout Factory. Folds happened to be on the other line, and signed up as producer. Folds and Shatner first collaborated on on Folds' Fear of Pop, Volume 1. Shatner lent his spoken word soliloquy to the song In Love.

Blasting off with a cover of Pulp's "Common People", Shatner's spoken delivery lends crisp and humorous air to the original's premise. Joe Jackson's vocals interspersed with Shatner's wryly observant phrasing emphasize the lyrics about a rich girl slumming with a poor bloke It's catchy in the way that any good rock song is, and bridges the gap between novelty and a "real" rock song. "I Can't Get Behind That" is an absolutely hilarious Beatnik rant set against a wall of percussion. Layers of timbales, bongos, cymbals crash and burn as Shatner and Henry Rollins trade hilarious rants about SUV drivers on cell phone, bad English and the price of oil. Shades of a madcap version of Bill Holden in Network -- "I'm mad as hell and not gonna take it anymore."

The song "Has Been", an amusing put-down of the armchair quarterbacks who spend an inordinate amount of time criticizing famous people. Inspired after Shatner read a National Enquirer story that referred to him a "has been." But Has Been is not all guffaws and wry observations. "That's Me Trying", written by Folds and High Fidelity author Nick Hornsby, concerns an absentee father attempting to reconnect with his grown daughters. Many "confessional " songs written by younger artists come off sounding overly dramatic or downright whiny, but the personal songs on Has Been benefit from a more mature perspective. "What Have You Done?", a short song about the death of Shatner's third wife, Nerine, is almost embarrassingly painful, while "It Hasn't Happened Yet" has the quiet dignity of a prose poem. Given Shatner's curriculum vitae, Has Been is a powerful, droll, and sometimes somber retrospective of a life lived to the fullest.