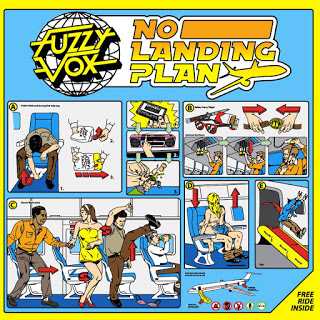 The second album from French power pop trio, Fuzzy Vox, No Landing Plan, is an upbeat collection of songs combining the best attributes of melodic power pop and hard-edged garage rock. The band travels out of their comfort zone into social commentary and psych-pop on a few of the tracks, without sacrificing the infectious beat.

Fuzzy Vox formed in 2011 in Joinville Le Pont, France, on the outskirts of Paris. The band released a few EPs before releasing 2014’s On Heat, their debut album.

For No Landing Plan, the band ventured to California to record, enlisting producers Ryan Castle, who’s worked with Snow Patrol, Black Sabbath, Billy Idol, ZZ Top, etc., and Andy Brohard (Wolfmother, Tegan and Sara, the Hives). The songs were mastered by Howie Weinberg, who has worked with Nirvana, the Ramones, Herbie Hancock, and other legendary artists. The ace recording team renders the band’s well-crafted songs into crisp, infectious tracks for maximum danceability.

“Explosion of Love” kicks off the album with an infectious beat designed to make you move. The frenetic rhythm of “Distracted” is great for pogoing or frugging, a ‘60s garage rock revival that channels the Sonics. “Told You Before” with its out-of-kilter energy and gritty vocals, has that unapologetic brashness of mid-60s Kinks’ and Who. “Raw Evil” starts out a bit like Elvis Costello, then segues into heavier garage rock. “Bo Diddley” pays tribute to one of the architects of rock ‘n’ roll with its frenetic beat. (The band’s featured a window-rattling version of Jerry Lee Lewis’ “Great Balls of Fire” on their Technicolor EP.)

“Don’t Leave Me Behind” is bouncy, skinny-tie power pop to the nth power, and “I Got a Girl” draws from Plimsouls influences with a wilder pace.

The band proves they’re not afraid to tackle serious subjects in “They Shot Charlie”, about the Charlie Hebdo terrorist attack. The tone picks up again with the bouncy “Easy Street”. The album’s last track "A Reason to Love" is lush, psych-pop with a guitar theme out of a TV western.  A spoken word interlude near the end fades out with some distorted guitar, making it the album's most ambitious track.