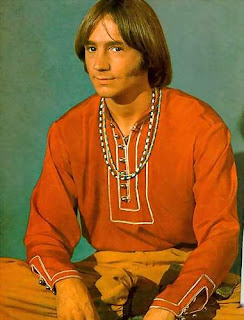 Peter Tork died on February 21 of complications from  adenoid cystic carcinoma, a rare form of cancer. He was 77, and the second Monkee to pass away. (Davy Jones died in February 2012,). He had battled cancer on and off for ten years. Peter died at his family home in Connecticut.

When Davy died,  it was a total shock. I sought solace with other fans through social media. I started a Monkees blog with two Millennial girls and learned more about my childhood idols than I’d ever imagined.

Now, with two Monkees gone, there's more of a numb resignation to the passage of time, and a tendency to celebrate the past and have more of a rock version of a "jazz funeral" along with traditional  mourning. We were so lucky to have Peter, and the rest of the Monkees, as part of our lives for so long.

Peter was known to the general public as the Monkees' lovable, dim-witted bass player, but  loyal fans knew him as an accomplished musician, free spirit, intellectual, and a constant, low-key presence in the Monkees-sphere.

When we were kids, everyone had their favorite Monkee (Micky was mine), but we loved ‘em all.  After watching two seasons of episodes, we appreciated them all and knew everything about all four Monkees from the fan mags.

Peter was third in line as a teeny-bopper idol after Davy and Micky. That’s hard to believe when you see his beautiful dimple and big doe eyes – shows you the wealth of looks and talent in that group.

There was so much more to Peter than being the Monkees’ third (or fourth) wheel, depending on your tastes.) There were several stages of Peter’s career, in and out of the Monkees. 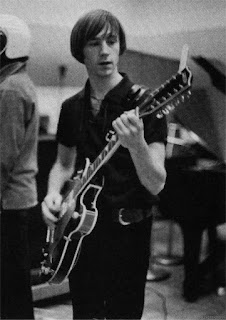 Peter made a short film in college (circa 1962) called “The Love Potion”.

Music was his first creative love, though.  He moved on to and tried his hand as a folk singer. He first met Stephen Stills in the Village. Later, they both auditioned for the Monkees. Stills was passed over due to his bad teeth, and suggested Tork audition for the role.

The rest, as they say, is history.

Peter was cute as a button and sharp-witted, as evidenced in this clip of his audition.

During the first season, Peter’s character (‘the lovable dummy”) was always getting in trouble. He was kidnapped by gypsies in search of the Maltese Vulture in  “Son of a Gypsy.” As a six year old, I was very worried about Peter in those early episodes, “Mommy, is Peter gonna be all right?” I would ask my Mom. I would always root for him when he couldn’t fly in the sky like the other Monkeemen “C’mon, Peter, you can do it,” I’d say.

In “Monkees Vs. Machine” Peter becomes flustered when a computer (DJ-61) interviews him for a job at a toy company. (Mike steps in to save the day and causes the computer to overheat.)  Peter’s character steals a portrait of Valerie the debutante in “One Man Shy” and the guys teach him the proper way to woo a lady.

And look at his adorableness in this clip featuring "For Pete's Sake".

He was always wore his belt buckle to the side and often sported mismatched socks.  His most well-known musical contribution on the TV show was the wacky “Auntie Grizelda”. In the real world, Peter played the banjo, guitar, harpsichord, piano and organ as well as the bass.

I liked the second season of the shoe better than the first..The clean-cut boys of the first season had turned into hippies! Davy and Peter dressed in Nehru jackets and love beads and Micky had an Afro. Mike wouldn’t have any of that nonsense. He still wore his wool hat occasionally, but favored brighter shirts.

We loved the way hippie Peter dressed, in his two toned leggings, flowered tunic, suede boots, and love beads. And, oh that beautiful, sandy blonde hair! He didn’t just dress like a hippie, though, he was one. At the end of one episode, he explained the difference between hippies and free people in .

Peter’s comments about free people start at the mark

During the second season, Peter (unknowingly) sold his soul to the devil for a harp in “The Devil and Peter Tork”. Considered the best episode of the series by most people, it ends with a moving speech by Mike about the power of love.

Peter  has his paintings snatched by gangster security guards, trades his guitar to a con artist for a treasure map, and becomes involved with a professor’s kidnapping. Davy only had to  fall in love, Micky had to be kooky, Mike had to be sensible and stoic, but Peter had to act dumb and/or disappear.. Sure, most of the episodes had repetitive, one-note plots, but they worked because of the boys’ charisma and chemistry.

We remembered every bit of Peter’s obscure dialogue, just like we did with the others When my boyfriend an I saw a sign directing us to go down the alley to a punk rock club, we looked at each other and said, “Down the alley?”, imitating Peter in “Monkees Blow Their Minds.” as he walked to the storefront of Oraculo, the charlatan mentalist.

That episode, the second to last one broadcast, had Peter walking around as Oraculo’s catatonic assistant. Even in the last episode “Mijacogeo (The Frodis Caper),”, he spent much of the story catatonic again, this time from watching the Frodis eye on the TV.

When I was in college, a friend of mine had a framed photo of Peter on her dresser. I didn’t recognize him at first. He had long, unkempt hair and had a “Jesus” look. When she told me who it was I felt a tinge of sadness. Could this be our sweet, goofy Peter?

Peter was the first one to leave the Monkees. After the TV show ended, he
had a band called Release with his second wife, Reine Stewart, on drums. He played CBGBs and other rock clubs as a solo artist. None of his post-Monkees musical projects met with much success.

The early ‘70s were a hard time to be an ex-Monkee. Micky was a hard-drinking Hollywood Vampire, along with his buddy Harry Nilsson.  He appeared in a few B movies, including the infamous “Night of the Strangler. Davy appeared on “The Brady Bunch” and released a bunch of nondescript singles.

Mike didn’t need to deal with it, though. He forged ahead as a country rock trailblazer before inspiring MTV with such projects as “Elephant Parts” and “Pop Clips”.

This 1979 video shows Peter holding his own against a smarmy interviewer. (Only a guy this smart could play a convincing dummy.)

Peter joined Dolenz, Jones, Boyce and Hart onstage at in 1976, released singles that went nowhere, and played shows at CBGB’s and other clubs. (Chrissie Hynde, Joan Jett, and Tommy Ramone were allegedly present for some of the recording sessions, according to Wikipedia.)

Peter worked as a teacher, baseball coach, and even a waiter before the Monkees reformed in the ‘mid-80s, He was his bouncy, joke-cracking self on the “Win a Date with Peter Tork” skit on David Letterman’s Show in 1982. 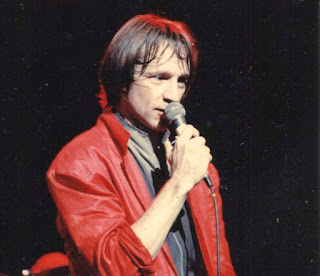 Peter and Davy toured just before the official mid-1980s reunion, when MTV reruns reignited the Monkees’ fame. The Monkees made the covers of teen magazines -four 40-something guys competing with the likes of Duran Duran, Kirk Cameron and Corey Haim for a Tiger Beat cover. But this time it wasn’t so much about being heartthrobs as it was about being everyone’s kooky adopted uncles.

Mike rejoined joined briefly in the mid-90s, with the release of “Justus”, the 1997 TV special. He joined Peter, Micky and Davy for a handful of shows. The ‘90s version of the Monkees gets short shrift in the history of the band, but the album Justus had a few bright moments, including Peter’s song “Run Away From Life.”

His longest ongoing band, beside the Monkees was Shoe Suede Blues. Ever the rapscallion, he had a lot of fun with post-Monkees songs, like “Milkshake” (from  his 1994 solo album Stranger Things Have Happened and “Dress Sexy for Me” from 2002’s Saved by the Blues with Shoe Suede Blues.

In 1996, Peter released the album “Two-Man Band” with James Lee Stanley, a collection of blues and acoustic numbers that Allmusic.com selected as an Album Pick. 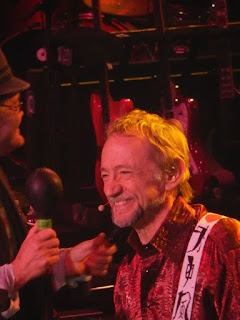 Peter was diagnosed with a rare form of cancer of the salivary glands in 2009 After successful surgery, he continued touring with Mike, Davy and Micky.

Davy’s passing took everyone by surprised. The 2012 tour was a heartfelt tribute to Davy and Mike’s return to the stage with as a Monkee.  Micky was the consummate show biz professional, Mike had a dry sense of humor, and Pete was the quirky, sensitive one.
In 2013, Peter went on a solo tour where he reminisced about the Monkees and his career and played an acoustic set (with lots of his trademark banjo.)  He performed lesser-known and unreleased songs, such as Come on In.

During an interview to promote the album Good Times! and 2016's 50th anniversary tour, Peter teared up when mentioning Davy. They’ve removed the video from the CBS YouTube channel, but here's an article based on the interview.

Davy and Peter two were the sensitive, sweet ones, even in real life. Peter’s difficulties seemed to be encapsulated in one span of time in the ‘70s, Davy’s hard times were scattered on throughout the decades. (Read his book “They Made a Monkee Out of Me” for more details.)

In an interview with the St. Petersburg Times in 2000, Peter remarked that “Micky's the best pal, but my heart connection is biggest with Davy. Davy is capable of as much heart as anyone I've ever met. I kind of had a crush on Davy for a while.”

After the 2016 tour, Peter played occasional shows with Shoe Suede Blues and made personal appearances at fan conventions with Micky.  He released his last album with Shoe Suede Blues, “Relax Your Mind”, a tribute to Leadbellly, in 2018. It included a musical appearance by his brother, Nick Thorkelson  (Nick is a cartoonist and illustrator by trade.)

Peter  always had a few creative surprises up his sleeve, even in his golden years.In 2015, he composed "Moderato ma non troppoa" a classical piece for piano and orchestra, which was performed by the Orchestra Kentucky of Bowling Green, Kentucky. In a total non-sequitur move, he acted in a 2017 indie horror movie called“I Filmed your Death”.

He stopped by The Institute for The Musical Arts in Goshen, Massachusetts in 2010, and played a set to raise funds for the non-profit. IMA is dedicated to helping girls and women succeed in the music business. The IMA was established by June Millington of the rock group Fanny and Ann F. Hackler.

Peter sang lead vocals for “Angels We Have Heard on High” for the Monkees “Christmas Party” album, which was released in October 2018. You could hear in his voice that something was seriously wrong. The song is Peter’s last released recording.

People can contribute to The Institute for The Musical Arts’ scholarship fund in Peter’s name, per his family's wishes. Read more about IMA here.