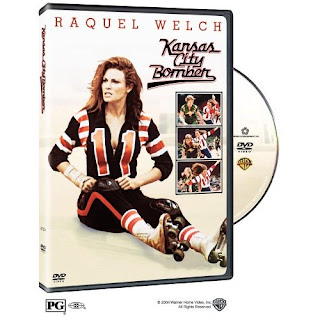 Drew Barrymore’s 2009 film Whip It chronicled the tattooed glamor girls of modern roller derby. The real-life counterparts that spawned this movie really skate, block and brawl, but many of them look like retro pinups while doing it. That’s quite different than the infamous stars of the Roller Game of the Week , a syndicated TV show from the late 1960s and early 1970s that featured the Los Angeles Thunderbirds versus an array of unsavory opponents, like the Texas Outlaws and the New York Bombers. A pseudo-sport that combined banked track skating, staged fights and colorful characters ala professional wrestling, roller games blared from many a TV set every weekend. The Los Angeles Thunderbirds were the cornerstone of the league. 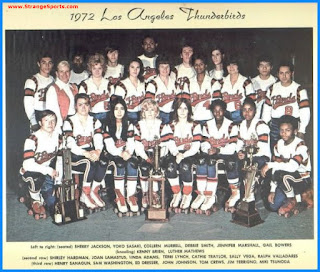 The co-ed  T-Birds battled their rivals at the Olympic Auditorium in downtown L.A. This venue is pretty grimey now: I imagine it was even scarier when the T-Birds plied their trade.  Roller Games’ stars included the T-Birds Shirley Hardman, a burly woman with a blonde pony tail who often chased opponents around the rink with a baseball bat; and “Psycho” Ronnie Rains, who was known to wear a  WW II German Kaiser helmet while skating from time to time. It was all part of the shtick, of course and the fans loved it. Play-by play announcer Dick Lane ( the first sports announcer to use the phrase “Whoa, Nelly!!) and Bill "Hoppy" Haupt described the action.  Every Sunday night, my brothers and I gathered around the TV set and rooted for the T-Birds to squash the opposing team. The skaters’ antics got us so riled up we would often throw chairs around the basement in a hyperactive frenzy. Luckily, no one was hurt during the viewing of the program.


Eventually, the Roller Games caught Hollywood’s attention. Raquel Welch starred as the Kansas City Bomber in MGM’s 1972 skating drama. Lacking the poignancy of the The Wrestler, another film about a “staged” sport, or the good-natured girl power of Whip It, 1972’s Kansas City Bomber starred Welch as roller derby skater K.C. Carr, who is booted from  the Kansas City Ramblers after losing a match race with another skater. She is traded to Portland, where the team’s lecherous owner ( Kevin McCarthy) takes a fancy to her. The single Mom of two becomes the team’s reigning diva and a fan favorite. The other female skaters don’t take kindly to this, particularly the eternally soused Jackie Burdette, played by Helena Kallianiotes. Burdette is K.C’s mortal enemy and opponent in the pivotal match race at the end of the film. Kallianiotes earned a Golden Globe nomination for her portrayal of the troubled, has-been skater. K.C. befriends a country bumpkin male skater, played by Norman Alden, whose attempts to impress K.C. (and become a more “colorful” skater) end with a violent, on-track meltdown.


The final version of Kansas City Bomber was derived from an original script by UCLA film student Barry Sandler. He wrote the script after watching a T-Birds match at the seedy Olympic Auditorium. His original concept was more complicated than what finally made it to the screen, as he explains in the above-posted YouTube video. The final script, less daunting and adapted for mainstream audiences, debuted in theaters in August 1972.


K.C.’s Mom watches her kids while she travels around the country, skating and brawling with the Roller Games. There’s only one short scene of K.C. with her children (her daughter is played by a young Jodie Foster), which ends with her son  running away from her and her mother berating her lifestyle. The reason for K.C.’s marital status is never fully explained, so we know very little about what brought Welch’s character to this point in her life. Still, Welch plays K.C. with a mixture of independence and vulnerability that  might surprise some viewers who expected  her emoting skills to begin and end with “sex symbol.”

Many  professional Roller Games skaters appeared in the film, including Patti “Moo-Moo” Calvin, John Hall and Judy Arnold, lending it an aura of authenticity. Welch  held her own against the skating pros, even doing some of her own stunts. She suffered a broken wrist after one stunt, which delayed filming for several weeks.

Given the nature of roller games in the 1970s, it’s surprising that there weren’t more movies about it. The subject seemed ripe for the low-budget exploitation craze of the time. Later that year, the American International comedy Unholy Roller was released - aside from that, the roller derby didn't make a big impression on filmmakers at that time.  I’m surprised there wasn’t an ABC Movie of the Week based on Jim Croce’s  song Roller Derby Queen.


Kansas City Bomber is a engaging movie about a faux sport we’ll never see quite the same way again. It stays true to roller games in all their grungy, bargain basement glory. The everything but the kitchen sink plot takes up time that could have been better spent on more banked track action, but it’s just as entertaining as any other 1970s B movie. But be forewarned, guys, its not as sleazy as you might expect. The DVD release is rated  PG,  as there was only one, non-explicit shower scene and some swearing.