Book Review: I, Doll: Life and Death with the New York Dolls by Arthur "Killer" Kane 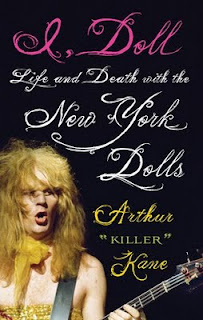 It’s hard to believe the New York Dolls remained an obscure but highly coveted rock curiosity for almost three decades. If you listen to the seismic activity in the New York Dolls camp since the surviving members reunited, the amount of media coverage, and the kudos from young kids and their Moms, Dads and Grandpas, you'd think they were the aging glam rock equivalent of over-saturated reality TV stars.

But from the time Morrissey reunited the remaining band members for the Meltdown festival in 2004, the reunited 2York, I mean New York, Dolls have blazed into music consciousness at an accelerated pace that makes up for the initial confusion and shunning they received from the world at large the first time around.

What with two brand new CDs of original music released since 2006, DVDs, concert tours, and renewed interest in the tiniest detail of the band’s heyday. Not to mention indefatigable Johnny Thunders nostalgia, that’s been going on forever. Lech Kolwalski has edited several versions of the unreleased (and heavily bootlegged) JT documentary Born to Lose. Kowalski’s biopic though, deals mostly with Thunders post-Dolls music (and drug) career.


The Dolls original bass player, the late Arthur “Killer” Kane, the sweetest and least flashy member of the band, insofar as a tall, lumbering guy in platform boots, boa and sparkly tube top can  be considered  unassuming. Kane was the subject of the 2005 documentary New York Doll, and now his posthumously released memoir I Doll: Life and Death With the New York Dolls is now available from Chicago Review Press. As far as I can tell, Arthur wrote the book without a ghostwriter, and he has a breezy, conversational writing style. Some of his recollections are hazy-the passage of time can further dim events that occurred in a drug and alcohol stupor in the early ‘70s. (There are a few pages of editors’ notes at the end of the book to correct factual errors).

It’s refreshing to read a first hand account about the Dolls first 16 months. They go from being an underground hit at the Mercer Arts Center in NYC to play Wembley Arena in London during those 16 months. They rush from a celebrity studded party in London to a hotel and find original Dolls drummer Billy Murcia dead, O.D’ed in a bathtub. They create their first costumes from vintage clothes and even sew some of their own stage clothes from scratch. They get sloshed on Newcastle Ale and ambling drunkenly though a gig on their English tour, getting so loud and obnoxious in their natural Manhattan habitat that fellow bar patron David Bowie skitters away into the night. And of course there are the drugs and groupies…

Arthur’s widow Barbara adds a foreword and an epilogue to the book. Her marriage to Arthur was full of ups and downs; when he was drunk or angry he was physically abusive; once he even beat her up and tied her up with a telephone cord.  Arthur died from leukemia in 2005, a few weeks after the Meltdown reunion concert. Barbara notes in the epilogue that Arthur blamed his problems (and the demise of the Dolls, in part, on singer David Johansen Arthur refers to him as "our singer" instead of by name in the book. Anyone who saw New York Doll knows the story of how Arthur was jealous of the outgoing and outlandish Johansen.

Kane’s dislike for Johansen and managers Leber/Krebs overshadows some of the antics and narrative at times. As a firsthand look at the inner dynamics of one of the most infamous and influential bands of all time, I Doll is intriguing. A good read for hardcore Dolls fans and other lovers of early New York punk/pre punk.

Disclosure: I was provided with a free review copy of this book by Chicago Review Press.
Posted by JadeB at 10:26 PM 1 comment: