You Can't Get It On DVD-Looking For Mr. Goodbar 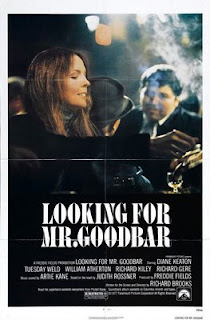 Even though 1977’s Looking for Mr. Goodbar starred Diane Keaton, Oscar nominee Tuesday Weld, and introduced a very young Richard Gere to movie-goers, it’s currently unavailable for consumption by the American public on DVD. The seedy, sad but eloquently acted morality tale, set against the backdrop of the swingin’ Manhattan singles scene, was based on Judith Rossner’s best-selling novel. That book, in turn, was gleaned from the harrowing details of an actual NYC crime. The real life murder of teacher RoseAnn Quinn was even more shocking than the movie’s version.

Theresa Dunn (Keaton), a victim of childhood scoliosis, still lives at home with her strict Irish parents. She’s perpetually sparring with her Dad, played by Kiley in a one-dimensional role as the stereotypical domineering Roman Catholic father. Is a Roman Catholic ever portrayed as thinking, feeling person in any Hollywood movie? I loved the scene where he’s stomping around the house in a Notre Dame jacket while he berates Theresa. Talk about the screenwriter overstating his point!

Free-spirited stewardess sister Katherine (Weld) comes to visit at Christmas. She’s just married a rich Jewish guy who’s into into group sex, and she invites Theresa to their apartment to party. Theresa hangs out with them while they watch a porno. She seems intrigued by this, and soon she’s rented an apartment downstairs from the swinging couple. After getting acclimated to her dimly-lit, roach-ladden digs, she begins frequenting local singles bars, smoking and drinking and looking for one-night stands. Is her newfound wantonness an attempt to imitate her hot, confident sister and/or a chance to rebel at her strict upbringing?

Theresa loses her virginity to her married college professor (Alain Feinstein) and then dumps him. Richard Gere plays Tony, her on-again, off-again stud. In one scene, she matter of factly picks up a chubby furniture salesman for a one night stand. By this time, her rapidly deteriorating self-respect and sense of judgment are out of control. Theresa’s outward personality lacks any softness or vulnerability. This slatternly behavior contrasts with her day job as a dedicated teacher of deaf children. At night, she’s the opposite of the tender, patient woman her students know and love.

Theresa buys coke from a pusher in her favorite bar’s restroom. She’s unacquainted with drug lingo and barely knows how to snort the stuff. This is more depressing than funny because we realize it can only further enhance her downward spiral. While Theresa is sowing her wild oats, sister Katherine has an epiphany about her own lifestyle. After years of ditzy and irresponsible behavior, she gives up drugs, alcohol and promiscuity. This revelation doesn’t deter Theresa from her hedonistic path. Katherine’s warning goes completely over her head.

The final sequence in Looking for Mr. Goodbar is frightening in a very real way, partly because we’ve come to know the character as a human being, not just another tic in a body count. Since Goodbar was released in 1977, we’ve learned to expect gore and close-up sensationalism in murder scenes, but the stark realism of Theresa’s last moments is more disturbing than high-tech horror because it’s authentic, because it focuses on the victim’s struggle and not just the sadistic killer. And it takes place by strobe light in a dark room. I may have said too much, but even if you know that, the ending will still haunt you when you see it.

The men in Looking for Mr. Goodbar are all creepy, and I’m not talking about just the murderer. There’s Richard Gere in his first well-known film role as coarse Italian stud Tony. Alan Feinstein as Terri’s college professor/lover is standoffish and cold, and Tom Berenger makes his big-screen debut as the violent, sexually confused ex-con who does her in. Even “good guy” William Atherton gives a disturbing monologue about his parents having sex. LeVar Burton, in a small role as the older brother of one of Theresa's students, is the only noble male character. He punches Tony’s lights out when he harasses Theresa on the school playground.

In Looking for Mr. Goodbar, a woman who sleeps around is an emotionally confused victim, but by 1987’s Fatal Attraction, the lead female character was not only sexually promiscuous, but obsessed and violent as well. That’s women’s lib for ya!

A VHS tape version of Looking For Mr. Goodbar was released in 1997, and there are copies for sale on Amazon.com and eBay. There’s no word from any official source yet as to why it hasn't been released on DVD.