Who Knows Where the Time Goes? : Frances Bean and Lourdes are All Grown Up 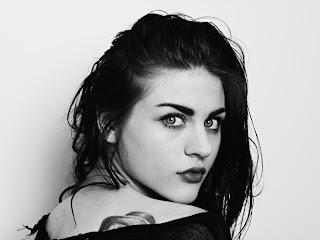 Celebrity offspring of the digital age, like Suri Cruise and the Jolie/Pitt brood, seem destined to be photographed from cradle to grave with barely a moment of privacy. But the daughters of two controversial music celebrity Moms spent their childhoods without constant pre-planned photo-ops, emerging to the world in their early teens without any of the visible emotional problems associated with famous kids. I’m referring to Lourdes “Lola” Ciccone Leon and Frances Bean Cobain.

When Lourdes was born, VH-1 played Madonna videos all day to celebrate the Material Baby’s birth. Madonna was a big deal even in 1996, having just starred in the film version of the musical Evita.. Coincidentally, Courtney portrayed Althea Flynt in The People vs. Larry Flynt that year. Can you imagine what would have happened if they had both received Oscar nominations? What a mess that would have been! (Madge did win the Golden Globe for Evita.) Lola posed with Madge for Vanity Fair when she was a baby, but we only saw sporadic paparazzi shots of her until recently.

Courtney also had the sense not to parade Frances for the paparazzi every two seconds. She was obviously very protective of her daughter, yet a victim of her own demons, Courtney spoke lovingly of Frances, and yet non-sequiturs surrounded many of these maternal statements.

We saw very little of Frances from the time Kurt died up until her interview with Teen Vogue in 2005 at the age of thirteen. A restraining order was issued in 2009 forbidding Courtney from having even indirect contact with Frances.

Lourdes is just fourteen, so she’s not really all grown-up yet. Lourdes doesn’t look much different than any NYC schoolgirl when not doing PR with Madge. She’s appeared in some of her Mom’s videos, and helps out with Madonna’s Material Girl clothing line for Macy’s. Lourdes blogs about fashion for the Material Girl Collection. (Please note when compiling Christmas gift lists-she does NOT like Gladiator sandals).
Material Girl clothes are cute, reasonably priced clothes for girls who want to dress like their Moms, or in some cases, Grandmas, did in the 70s and 80s! 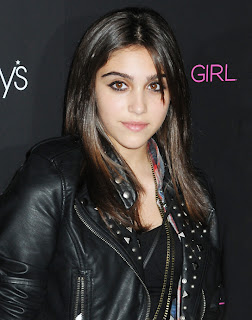 Lola deals with her Mom’s need for attention admirably, taking it in stride when Madge has to show her barely-camouflaged butt for the photogs on the Red Carpet. She attends the LaGuardia High School for the Performing Arts, aka the high school in the movie “Fame, when not playing junior fashionista. Will Lourdes strike out completely on her own once she turns 18 or stay closely under her mom’s tutelage? It’s too soon to tell.


In a way, Frances and Lourdes are following the artsy trajectories of their famous Moms. Lourdes seems to be having a blast with her Mom’s fashion line and public appearances.  Frances Bean has that zig-zag approach common to many teens. She’s going to college in the East, but her home is on the West Coast. She’s dabbled in painting, modeling, singing and interned at Rolling Stone. Although she’s estranged from Courtney, Frances has remained close to her paternal grandmother and aunt.

It’ll be interesting to see if these famous offspring eventually eschew the limelight.  Frances might not choose a public life, given her parents’ travails. She doesn’t seem destined for the gossipy, mainstream lifestyle her mother craved. Frances seems more suited for the occasional bohemian appearance at an art gallery or a more cerebral type of creative career. Lola may take to the celeb life; after all she was raised by the queen of self-promotion.
Posted by JadeB at 5:16 PM No comments: