More Beer than Money: Zine Culture of the 1990s 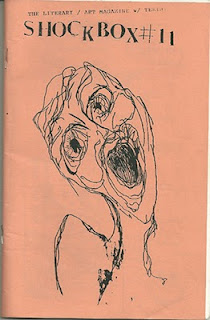 Analogue Bubblebath, Machine-Gun Weilding Zebras from Hell and Baby Sue.  No, those aren’t names of trust-fund indie rock bands from Silverlake. Those creatively perverse monikers belonged to zines from the heyday of underground DIY publishing in the 1990s. Sure, people carry on the print zine tradition today despite websites, e-zines and P.OD. publishers. You can find proof through the popular We Make Zines site. But  in the 1990s, print zines were the only game in town.

Before desktop publishing became the norm, putting a zine together was hard work. But there was something fulfilling about cutting and pasting crude drawings and various photos from disparate magazine and mashing them together.  Photocopying, stapling and snail-mailing a print zine was a ”get your hands dirty” personal thing. It had a whole gestation process. You had to grab paper, ruler, scissors, ink, colored pencils-whatever- and create your masterpiece in a very tactile way, often with friends assisting. Drunken parties often ensued. Quite different from typing solo on a computer screen, hitting “submit” and sending your poems out into the ether with  hardly a breath expelled.  Alas, there was money involved in assembling a print zine as well, but what dedicated, beer-guzzling ‘90s zinester had any of that?  Lots of people got in trouble for using the photocopier at work to churn out copies of their zines about hairy women (this was a real zine), hairy men, communist theory or even fluffy puppies!

One notable example of someone copying zines for free was Mike Diana of Boiled Angel infamy. He was fired from his job as a school janitor when he left some of his notorious zines at work. In 1996, he was the first American zine artist to be convicted of creating and distributing obscene material.  He was sentenced to community service and forbade to “draw for his personal use.” Collections of his work are now for sale (with no age-restriction) on Amazon. Time marches on. Although, from the descriptions I read in zine round-up Factsheet 5 and in some zine collections, there were homemade publications just as bad - or worse - that didn’t get popped by the authorities! Zinester Jim Goad, who published the incendiary, politically incorrect Answer Me, got in legal trouble around the same time as Diana. Zines have served as a springboard to bigger fame for some of their creators. Chip Rowe (Chip’s Closet Cleaner) eventually worked for Playboy.  Lisa Carver (Suckdog), Kim Cooper (Scram) and others got book deals and went on to work in mainstream publishing and media. 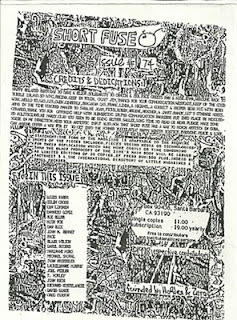 I used to buy all my zines from St. Mark's original location. I got lots of stuff there, including my first copy of  Maximum Rock and Roll. Zines are great fun because they are obviously done for the love of it, not for money, fame or good reviews from other zinesters. The creators are free to be themselves, with no edicts from some jerk-in-chief behind a desk. If you liked collecting glass shoe figurines, there was a zine for that, if you wanted to print a poetry zine dedicated to the “f” word, or whatever, you could do that. Of course, serial killers were big news in the ‘90s, so we had zines called Bukowski and Serial Killers, Murder Can Be Fun, etc....

Some pop culture zines looked like mainstream mags, but contained zine-quality snarkiness between the covers. Lollipop, a music zine out of Boston, was all glossy and professional-looking, but its contents, even the record reviews, were offbeat in a highbrow kinda way. (Think of early Creem magazine.)  Popsmear, another glossy  rock mag, seemed to be a one-man operation, but it was sold on NY newsstands for awhile. Due to their idiosyncratic writing styles and subject matter, these mags had more in common with zines than other four-color magazines next to them on the newsstand.

But for all the music/ politics/nonfiction/sex zines, poetry and literature still reigned supreme in hearts and minds of zinesters.  Here are some of the zines that published my poems (under the name Marianne Moro) between 1992 and 2000. 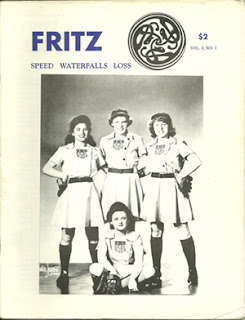 Some of the other poets whose work seemed to be in every issue of these and/or other DIY zines were Catfish McDaris, Lyn Lifshin, Cheryl Townsend, Belinda Subraman, Oberc, Shannon Frach, Michael Estabrook, Todd Moore and Bukowski pal Gerald Locklin.

For more info on zine culture, now and then, go to Zinewiki.com