Whatever Happened to Donnie Dacus?

In some ways, this is a companion piece to my article about guitarist Gary Richrath, who seemed to drop off the face of the earth after leaving REO Speedwagon in the late 1980s. Another long-haired guitarist of the late 1970s/early 1980s, Donnie Dacus, who appeared in the film version of Hair and replaced Terry Kath in Chicago for two albums, suffered the same fate. By the mid-1980s, he had dropped off the radar. Dacus’s sudden disappearance is a little perplexing, since his musical pedigree indicated he was much more than a flash-in-the pan talent. He played in several garage bands in his native Texas and later in L.A,. including the The Shux, the Yellow Payges and the psych/folk/pop band Odyssey.  His big break came as a guitarist for Chris Hillman, followed by work for Crosby, Stills and Nash and co-writing credits on Stephen Stills’ Illegal Stills album. 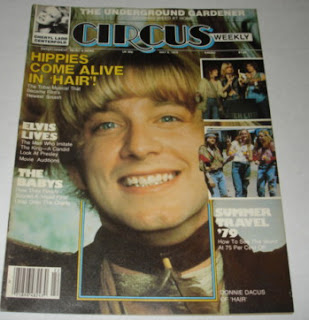 Shortly after working with Stills, Dacus was cast as Woof in the film version of Hair and he became somewhat of a teen idol overnight, appearing on the cover of Circus Magazine in May 1979. Around the time he starred in Hair, Dacus was chosen as Terry Kath’s replacement in Chicago. The flashy, Peter Frampton-tressed Dacus didn’t fit in with the jazz-rock band’s image at all, and after Hot Streets and Chicago 13, he was dropped by the band. Drummer Danny Seraphine later noted in an interview with Review Revue that “He was let go because he really didn’t fit into the band, never did, it was a mistake in the first place. It wasn’t his fault either, he was a good guy, he just didn’t fit in with the mix. I know it really hurt him to be let go like that, believe me now I know how that feels.”

After leaving Chicago, Dacus resurfaced as the touring guitarist for Badfinger in 1982. You can read more about that at singer Reed Kailing’s website. Also, according to Kailing, Dacus played guitar during a recording session for John Lennon’s Rock ‘N’ Roll album. There’s no verification as to what track he played on or if his work was featured on the released version of the album.

But Dacus wasn’t the only Hair alumni to exit show biz shortly after the film wrapped. Cheryl Barnes, who played Hud’s nameless fiancée, sang an emotional rendition of Easy to Be Hard during a scene in Washington Square Park.  Barnes, who was working as a hotel maid, earned the role after attending an open casting call for the film in New York. Prior to that, she’d performed as a singer with the band Eve’s Garden, opening for the Classics IV and other pop/rock bands. Her powerful version of Easy to Be Hard was allegedly filmed in one take. After the film’s release, Barnes sang Love and Passion on the American Gigolo soundtrack. Then she dropped out of the entertainment business, although, according to her Wikipedia page, she remained friends with Hair director Milos Forman.
Posted by JadeB at 11:11 PM 14 comments: