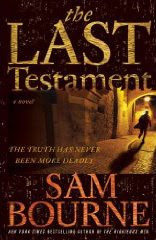 Mediating divorces instead of world-threatening squabbles between countries, Maggie Costello misses her former career and lives in a holding pattern, stuck between a boring job and an unsatisfying relationship with a control freak boyfriend. Her stint with the U.S. government ended after she made a grievous mistake that cost lives.

But the government needs Maggie’s expertise on a new crisis, and when a U.S. agent seeks her help, she complies, much to her boyfriend’s chagrin. In Sam Bourne’s Middle Eastern thriller, The Last Testament, the conflict between Israel and Palestine, an ancient clay tablet looted by a boy from a museum in Baghdad, and all types of shady assassins, terrorists and would-be assassins combine to engage the reader on a fast-paced journey.

The coveted clay tablet holds a revelation destined to change the course of Middle Eastern relations forever. Archeologist Shimon Guttman is murdered just before he gives a letter to the Israeli prime minister about the tablet’s meaning. The incident damages the Israeli-Palestinian peace process, and Maggie returns to the world of international relations and detective work. Guttman’s death sends Maggie — and his son Uri — on a desperate quest to find the killer(s) and decipher the true meaning of the tablet’s ancient language. A lot of wrong turns down dark alleys, cars driving off cliffs, and cyber-intrigue follows; Maggie spends time guessing passwords and decoding Second Life characters to reveal the identity and plans of the perpetrators.

The Last Testament is a breezy beach read. I finished the 436-page book in one afternoon. Each cliffhanger and revelation makes you curious to discover the “who” and the “why,” and that keeps you turning pages.

Sam Bourne is the pseudonym of British journalist Jonathan Freedland, who has reported on the Middle East for 20 years. His first-hand knowledge of the conflict certainly colors this book, as he humanizes its characters from an ill-fated Arab greengrocer to Uri, Maggie, and the perpetrators who chase them. There’s even an occasional mention of the everyday horrors and tortures of life in the war zone. A scene involving a car trailing Maggie is especially wrenching.

If you like topical, political thrillers, The Last Testament won’t disappoint. It’s tightly written, though only cursory info is given on main characters Maggie and Uri. Bourne’s first thriller, 2006’s The Righteous Men, had a more detailed narrative about Jewish mysticism and Kabbalah that some critics found preposterous. The Last Testament's storyline is easier to swallow, and its slicker prose style makes it Bourne's most accessible novel to date. 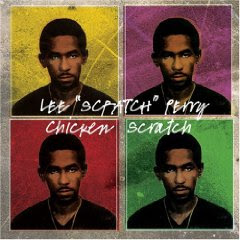 For Chicken Scratch [Deluxe Edition], Rounder/Heartbeat Records travels all the way back to Perry’s formative days as gopher and vocalist for Duke Reid at Federal and then for Clement Dodd at Kingston’s Studio One circa 1961. Perry then struck out on his own with “I Am the Upsetter,”, entering the commendable realm few musicians attain. And now after almost fifty years of producing and performing with other ska and reggae artists, Chicken Scratch [Deluxe Edition] gives us a listen to Perry’s first recordings.

The original Chicken Scratch, released in 1989, dusted off some of Perry's earliest recordings from Dodd’s Studio One & Reid’s Federal. This remastered edition includes bonus tracks and the album's fourteen original studio recordings. The term “Chicken Scratch” refers to the short-lived early '60s dance fad — no rival to "The Twist" — that prompted the titular track. The songs on this compilation, while far from Perry’s best work overall, still guarantee a good time.

This compilation exhibits the bare-bones start of a legend in the making. The production is sparse, the vocals aren't as forceful as the Black Ark efforts, but Perry’s trademarks are all here. There's the double entendres of “Roast Duck” and “Rape Bait,” a battle with the ever-nasty “Mother in Law’ before Ernie K-Doe got to her, and an early version of “Just Keep It Up”, written by Otis Blackwell. Also, serving up a contrast of content, "Madhead" brims with skanking buoyancy while “Cannot Wrong (And Get Right)” provides some moralizing and philosophizing. And “Feel Like Jumping” should make listeners feel as told.

Perry’s back-up singers, the Soulettes, comprised of Rita Marley, Marlene Gifford Constantine Walker, add charm to most of these fledgling recordings with the Wailers providing background vocals on “Hand to Hand” and pre-Upsetter musicians lending the ska beat.

Perry still wows in concert, having performed last year at CMJ and the year before at SXSW. If you get the chance to see him, definitely check him out. Between his outlandish outfits and multi-colored dreads, pro-ganja sentiments — not to mention a kick-ass backup band — he puts on a show that keep you smiling 'til the final note.
Posted by JadeB at 7:52 PM 1 comment: