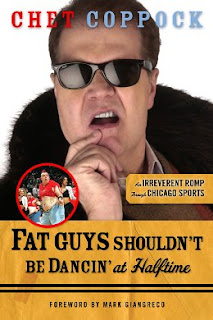 I know, I know. Why are you reviewing a book by a Chicago sports guy on an entertainment blog called The Slums Off Hollywood Boulevard? I was born & raised in Chitown, and before I hit puberty and discovered rock 'n'roll, I was a grade school tomboy who cut class to watch Cubs games. This book brings back a lot of those early sports fan memories for me.

Every city has its local celebrities. These folks are local newscasters, DJs, TV show hosts, athletes and they have a longer shelf life than most national celebs. This type of fame usually doesn’t translate well from one region of the country to another. A local New Yawk type might be too real and down to earth for the surf and suntan crowd in Laguna Beach. Some local icons do cross over to the national spotlight, getting their act known to fans of a certain “niche.”

In Chicago, some of its sportscasters are as famous (or infamous) as its athletic heroes. Harry Caray is the most famous example. Harry even made it to SNL, thanks to Will Ferrell’s colorful impersonation. Chet Coppock, one of Chitown’s longest running sportscasters, made it to the national spotlight several times, as a syndicated sports talk show host and as an announcer for the World Wrestling Federation and the Roller Derby.

After almost 40 years as a sportscaster, Coppock has written his first book, Fat Guys Shouldn’t Be Dancin’ at Halftime. It’s divided into 100 ultra-short, stream of consciousness chapters about every facet of Chicago sports you can imagine. Chet leaves nothing out, even dedicating chapters to Northwestern football, Cog Hill golf course and long defunct (or long ignored) franchises like the Chicago Fire and the Chicago Sting.

Chester isn’t one of those sportscasters who just rattles off statistics. He’s a genuine Chicago sports character himself, just like Ditka and the’85 Bears. Chet praises and lambasts local execs, coaches, fans, and other sportscasters in his indefatigable, rapid-fire style, which translates surprisingly well to the page.

Pro sports are part of the entertainment biz and Chet dissects the good, the bad, and the ugly with pithy observations. In one example, about Cubs player turned sportscaster Ron Santo, (who is given to malapropisms and once had trouble pronouncing the word fuchsia on-air,), Coppock writes, “Ron and the English language haven’t had that dinner they’ve been talking about.”

There’s a section called “You Call These Sports?" Here Coppock reminisces about covering the Indy 500, the WWF, the original Roller Derby and other sports of questionable repute. (Yes, Coppock was there during the halcyon days of the T-Birds and the Pioneers. As proof, there’s a YouTube clip of a very young Chet interviewing Joan Weston and Tonette Kademas.) About the current Windy City Rollers team, he says “The old roller derby was a con, a play for laughs. The Windy City Rollers, so help me Midge “Toughie” Brashun, are completely on the level. The fact is, they beat the living hell out of each other and generally go get loaded.”