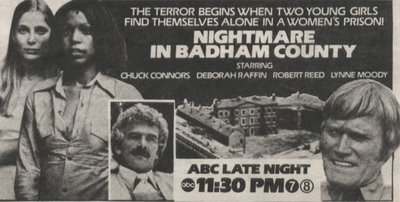 Nightmare in Badham County is a disturbing and surprisingly well-made TV movie, first broadcast on ABC in 1976. Equal parts thriller, social commentary and exploitation flick, Badham County had more going for it than sleaze and T & A. It. featured compelling lead actresses, a stable of well-loved TV stars moonlighting as sleazy villains and a gritty, unsettling ambiance.

UCLA coeds Diane Emery (Lynne Moody) and Kathy Phillips (Deborah Raffin) are driving cross country when their car breaks down in  the Deep South. A kindly old African-American man stops to help them, but before they can drive off with a repaired tire, racist Sheriff Danen (Chuck Connors) drives past. The fact that Diane is black and Kathy is white doesn’t sit well with Danen. That’s when the nightmare begins.  The corrupt sheriff has the girls take in their car for some unnecessary repairs, and through help from a sleazy gas station attendant and a corrupt judge; the girls are sentenced to 30 days hard labor at a hellish prison camp.

Diane and Kathy are separated in the camp, which divides barracks by race.  Kathy befriends a young girl Emmeline ( Kim Wilson ) who  later meets  a bad end at the hands of sleazy Superintendent  Dancer (Robert Reed). Like the villainous sheriff,  Dancer gets away with his evil deeds due to political connections. Both Reed and Connors went on to play similarly despicable characters in the mini-series Roots.

The producers tacked on nude scenes and more explicit violence to release the film overseas. Badham County became such a cult hit in China that Raffin visited the country and became an unofficial Goodwill Ambassador for Hollywood. She helped arrange for Chinese films to be shown in America and vice versa.

The tension throughout Badham County never abates. The girls attempt to escape or reach someone on the outside several times, but everyone in town is in cahoots with (or afraid of) the town’s crooked lawmen and polticos.

Diane makes one particularly daring attempt to escape with nail-biting results for the viewer.  Jo Heims’ script is full of twists and turns befitting a more “respectable” subject.  Director John Llewellyn Moxey lends the same foreboding air to Badham County as he did to his more famous films Horror Hotel and Night Stalker. 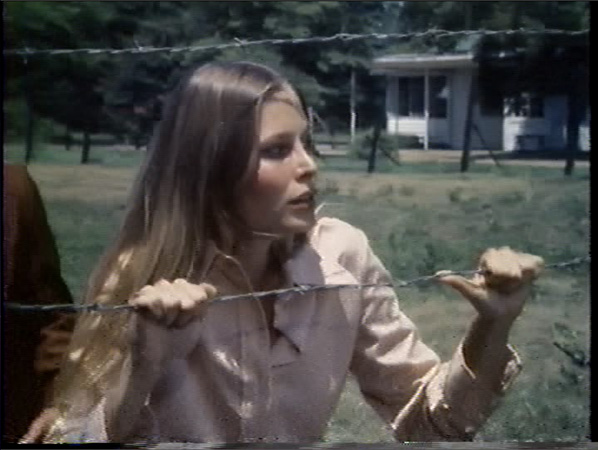 In the politically incorrect 1970s , TV movies didn’t  resolve all storylines in a neat little bow, and even some sympathetic lead characters suffered grim fates. Nightmare in Badham County was no exception.  There’s a glimmer of hope at the end, but not without tragedy.

While not the sleaziest of the women in chains genre, it does have its moments. A catfight out in the fields ends up with a water hose turned on the prisoners and a few of the girls are ogled as they serve drinks to the rich townsfolk at an outdoor party. Tina Louise, as nasty prison guard Greer, is the antithesis of Gilligan Island’s glamorous Ginger. She shows no mercy to any of the girls, stripping down a prisoner and beating her during a bed check. The other female guards Dulcie (Fionnula Flanagan) and Smitty (Lana Wood), are just as vicious. Smitty coerces a frail inmate into sex in. exchange for food in one scene. This isn’t all  modern day, airbrushed pseudo-lesbian erotica – it’s really grim,  more frightening  than titillating.

Raffin was nominated for an Emmy for her work.I thought Moody gave the better performance - much more subtle and realistic. Raffin overacted quite a bit, especially near the end of the film.

A watchable combination of story and sleaze, Nightmare in Badham County is one of many lost made for TV gems from the 1970s. You can buy Nightmare as part of the 8-Movie Pack Man-Cave at Amazon.