You Can't Get It on DVD- FM 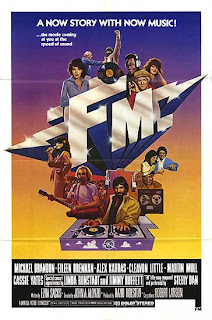 FM is the type of movie you discover in the afterhours graveyard of a cable channel when you suffer from insomnia at 3 a.m. It’s amusing when you’re sleep-deprived, but doesn’t pack the same punch when you’re wide awake. This quirky 1978 comedy is set in the offices of fictional L.A. radio station Q-SKY. The station’s program director Jeff Dugan (played by Michael Brandon) oversees a bunch of  wacky, Morning Zoo type radio personalities and battles with unhip station management.

The kooky DJ characters include Martin Mull as free-spirited DJ Eric Swan,  who cavorts with groupies and suffers for his art, Eileen Brennan as Mother, the husky-voiced nighttime DJ, Cleavon Little as the hip  Venus Flytrap clone, “The Prince of Darkness” and ex-footballer Alex Karras as the low-rated midday DJ.  These zany personalities and their subplots, along with the ‘70s time capsule music soundtrack, give the film its appeal. Kids who grew up in the 1970s and 1980s will relate to the quirky DJs and their loyal fans. Every city had a radio station like Q-SKY in the '70s and '80s.

FM plays like the feature film version of WKRP in Cincinnati, except that clueless owner  Mr. Carlson and plaid-suited Herb Tarlek have been replaced by a front office with a profits before music agenda. The film’s serious main plot is that old evergreen – big business versus creative peons. The evil owner and sales guy want the DJs to play pro-military commercials and other conservative nonsense. The DJs stage a strike/sit-in and commandeer the station, refusing to give in until the cops come to bash down the doors with a tow truck. The DJs dedication impresses the station owner, and in fairy tale fashion, all is forgiven and the DJs are allowed to run Q-SKY their way.

Unlike the film, the FM soundtrack is easily accessible online, and it mimics what was played on the more laidback FM stations of the time. The soundtrack  - and the film itself- make it seem like the Stones, David Bowie and Aerosmith didn't exist in the late ‘70s, much less the Sex Pistols, the Dammed and Iggy Pop. Save for Queen’s We Will Rock You and Steely Dan’s title track, it’s all snooze-inducing mainstream  rock that was even at the saturation point by the time the film was released, like the Doobie Brothers, Outlaws, Linda Ronstadt and Foreigner.

An amusing film with a lite retro look at the radio biz, FM may bring back pleasant memories of drinking Boone's Farm wine and smoking pot in the school bleachers for the 45 and over crowd. Anchor Bay released a DVD version in 2000, and it has since been discontinued.

WLUP "The Loop" was Chicago's version of the radio station in "FM". Here is their infamous TV commercial.