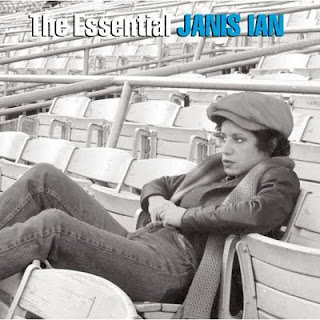 Singer/songwriter Janis Ian, best known for her 1975 hit “At Seventeen” began her career as a child prodigy. For the next 40 years, her songs dealt with everything from domestic abuse, coming out as a lesbian, the Holocaust, teenage alienation and incest, along with ballads about loneliness and love.

The Essential Janis Ian provides the travelogue for this journey. Ian picked all the songs on this two-disc compilation. With over 30 albums dating back to 1967, alternate versions, unreleased demos, and live performances, she had a huge amount of work from which to choose. This set from Columbia/Legacy traces Ian’s career from her first tumultuous hit as a teenager to the quieter, more introspective tunes dealing with topical issues and lost love in the decades that followed.

Essential’s first CD covers Ian’s work from her teen years to the early 1990s. The first song is a demo recording of “Hair of Spun Gold,” which Ian wrote when she was 12. There is a wistful, folk tale quality to this coming of age saga. “God & the FBI” was inspired by J. Edgar Hoover and his buddies spying on her left wing parents. “Silly Habits” has a swinging piano and jazzy vocals. Ian’s early work didn’t get the airplay of other folkies and troubadours of the time like Joan Baez , Pete, Paul and Mary or Bob Dylan, but she certainly was a vital part of the folk movement, due to one song in particular.

Her first success was with the controversial tale of interracial romance “Society’s Child.” The song, produced by Shadow Morton (Shangri-las, New York Dolls), was so taboo many stations refused to play it. “But, honey, he’s not our kind’, Ian sings, mimicking a mother forcing her daughter to break up with her boyfriend. This song was so controversial when it was first released; a radio station was burned down for playing it. Her initial record label, Atlantic, considered the song too volatile for public consumption and shelved it. Verve then released it, and “Society’s Child” became a top 20 hit in 1967.

After the whirlwind success of “Society’s Child” Ian faded into the background for awhile to “find herself” and recover from dealing with sudden onslaught of fame and controversy at such a young age. In 1973, she returned with the album Stars. It’s most famous song, “Jesse,” a tender love song about an absent paramour, was popularized by Roberta Flack, and later recorded by Shirley Bassey and Joan Baez, among others.

Ian didn’t become a household name herself until 1975, when her album Between the Lines spawned the hit “At Seventeen.” Both the single and album version are included on this collection. "At Seventeen" the theme song for alienated teenage girls everywhere. And where else could you hear poetry like "in debentures of quality / and dubious integrity/ Their small town eyes will gape at you in dull surprise / wham payment dot exceeds accounts receive at seventeen..” on AM radio.

But all Ian’s musings are not bleak. The hopeful twang, harmonica and all, of “This Train Still Runs” looks at the bright side of getting older. Night Rains, her last album of the 1970s paired her with early electronica kingpin Giorgio Moroder for the disco-pop anthem “Fly Too High,” her most upbeat and commercial single (It was more successful in Europe and Australia than the U.S.). The sweeping and majestic “Love is Blind” is the only offering from the poignant Aftertones.

The second disc contains songs unfamiliar to the causal listener; since there are no radio hits included.  By the early ‘90s, Ian had her own label Rude Girl, and most of the songs on this disc are selected from those releases. There’s “My Tennessee Hills” (with Dolly Parton on second vocals), a lovely ode to Appalachia. The melancholy “Some People’s Lives” dissects the ways people live in emotional squalor, while “Stolen Fire” brims with percussive verve.

The lyrics here stand on their own as sheer personal and emotional poetry. While Ian’s work (and certainly her personal stance) has always had a liberal political bent, the romantic songs included on Essential are applicable to anyone’s love life, regardless of gender or sexual proclivity. There’s an inclusive, humanistic appeal to her messages.

Ian has a sense if humor, too. She once guested on Howard Stern’s show, strumming a spoof of “At Seventeen” about Jerry Seinfeld and his young girlfriend. A snippet of the song was also famously used on The Simpsons. Her autobiography “Society's Child” is now available, and you can read more about Janis Ian’s life and music on her website.


I usually don’t pay much attention to the “musicians” at the top of the Billboard charts nowadays since, well, most of ‘em ain’t musicians but lukewarm retreads from American Idol or Sing Your Ass off or one of those brain dead but here to stay reality shows. It’s been rather hard, however, to totally dismiss Lady Gaga.  A quick glance at a photo of her in an outfit made from Kermit the Frog dolls makes you do a double take even if you've never heard her music. Britney didn’t even wear something that wacky that when she was batshit crazy. Hell, Madonna didn’t do that during her most outrageous reinventions. So I did a little fact-checking on La Gaga out of curiosity. It seems Lady Gaga, aka Stefani Joanne Angelina Germanotta (she’s Italian, like Madonna),  is more than what meets the eye. No, I'm talking about those hermaphrodite rumors, either.

*was a staff songwriter for  Interscope Records and Akon’s Konvict Record Label. She wrote songs for the  Pussycat Dolls and Britney Spears, among others
*sang in Lower East Side clubs with a performance artist named Lady Starlight
*attended New York University

Not the usual mass-manufactured pop bimbo the music industry has hoisted upon us this decade. Only time will tell if Lady G’s songs eventually concern themselves with more arcane references than “a disco stick” On Saturday Night Live last week, she managed to wear a gyroscope and heels, play piano and belt out a ballad. Girls can play "dress up" and be  real musicians, too. You can do both. Now this is the fully-rounded role model younger women pursuing a mainstream music career should emulate. Well, except for the Kermit the Frog costume.