The 20th Anniversary of U2’s Achtung Baby: The Songs, the Mythology and the $469 Deluxe Box Set 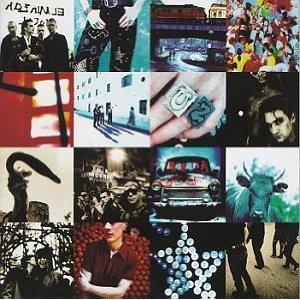 It’s been 20 years since the release of U2’s landmark album, Achtung, Baby, and Q Magazine is commemorating the event with a tribute CD. The October 26th  edition of the UK music mag includes a bonus CD, populated with covers by Nine Inch Nails, Patti Smith, the Killers, Garbage, Depeche Mode, Snow Patrol….and U2. (It’s actually a Jacques Le Cont remix of “Even Better than the Real Thing”.)

The tribute CD starts with NIN’s version of “Zoo Station.” Sounds like a great idea, but its slow, whispered build-up doesn’t lead to the crunchy wall of sound we’ve come to expect from Trent. The Killers take a piano ballad approach to “Ultraviolet (Light My Way)”,  but, but it fizzles out near the end. Jack White’s take on “Love is Blindness” fares better. Its mired in intensity and the blues and drenched with pain. (Perhaps Jack is trying to atone for his ICP collaboration. )The tribute CD is a hit or miss affair, but its nice to see so many respected alt-rock artist cover U2 songs.


U2, being the money-making machine it is, offers fans many ways to celebrate this milestone, and not all of them are cheap! Bono’s net worth as of this writing, is $900 million dollars (You read that right.), including his share in Facebook. U2 is run like a corporation, not just a rock group, and ya gotta give Bono props in that regard. Let’s be a rock star and compete with the members of the Forbes 400 at their own game.


So U2 are in the top one half of the one percent. OCCUPY DUBLIN…or the South of France. If you’re at the bottom of the 99%, you can buy an anniversary Achtung CD for $13.95. If you’re a little bit closer to the 1%, you could spring for the $469 multi-media box set. Sound preposterous? If U2 fans shell out $350 for concert tickets and $50 a year for “special access” to the U2 website, I’m sure they’ll be plenty of takers for the uber-deluxe box set. For a small fortune, you get six CDs, (with Achtung, Zooropa, and unreleased tracks), 16 art prints based on the album cover, various DVDs (including the Zoo TV concert DVD and the new documentary From the Sky Down) a hardcover book, stickers and, of course, a pair of “Fly” sunglasses. If you can devour all that without your head spinning, you need to get out of the house more.

All the songs from the Zoo TV era (including Achtung’s follow-up Zooropa), put the do-gooder anthems of Joshua Tree on the back burner. They were now replaced by European electronica, distorted guitars and raw emotion, the brazen, show-biz side of U2 had emerged.


Achtung and Zooropa turned out to be the only dark-tinged, pure alt- rock albums the band produced. Well, er, technically, I guess Popmart was alt-rock. It’s accompanying tour did turn out to be an unintended parody of the ZooTV  tour. Since Bono was in character as The Fly and Mr. Macphisto, he could pull off the rock star shtick. He was always a little too Catholic, married and politically earnest to emit a dark, dangerous vibe without going undercover. The Zoo TV tour ushered in a new image for the band. They were funny, dark, sexual and subtly political. Bono sang while words flashing across the TV screens did the proselytizing for him. The Zoo TV tour was technically awesome (for the time), and dizzying in its scope. Zoo TV, along with the endless Guns ‘N’ Roses Illusions tour, epitomized the last great era of arena rock excess by actual rock bands. Today’s music industry foists high-tech strip shows by Britney Spears and Rihanna on kids and calls them concerts.

“One”, “Mysterious Ways and “Even Better than the Real Thing”, the albums hits, aren’t Achtung’s most ingenious tracks. Three other tracks really caught my ear. “Acrobat” veers from expressing incredible venom to a hopeful ending. "Zoo Station's" distorted electronica made me look for more of the same. But “The Fly” was my favorite song by far. Starting with Edge’s sonic blast riff, the song barrels through the senses like aural speed. It hit number 1 in the UK. The song's scenario (a crank call from Hell, according to Bono) and lyrics like “Every artist is a cannibal/ Every poet is a thief” and beat-heavy industrial rock soundscape didn’t attract the same response in the U.S., however, and it only got up to number 61 on the “Hot 100” charts.


Some albums attain perfection. Achtung Baby is one of them. You can dissect it like a novel or listen to it for enjoyment. Either way, it works. Like another masterpiece, Blood on the Tracks, much of Achtung Baby was inspired by a divorce, in this case, Edge’s breakup with his first wife. If you’re in an emotional frame of mind, the lyrics will hit you like the proverbial ton of bricks. If you want to learn more about Achtung, Baby, the documentary, From the Sky Down chronicles the making of the album in Berlin. You can watch the film on Showtime if you don’t have the dosh for the uber-deluxe box set.


U2 performs "Even Better than the Real Thing" at the 1992 MTV Music Awards with Garth (Dana Carvey) assisting on drums.