Book Review: Beat Me Til I'm Famous by Billy McCarthy 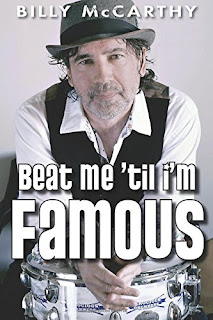 If you’ve read Motley Crue’s The Dirt or seen the Penelope Spheeris documentary The Decline of Western Civilization Part II: The Metal Years, you probably have a good idea what it was like to be in a hair metal band in L.A. in the late ‘80s.

But you didn’t learn about the day to day drudgery, desperation, and infighting that the struggle for a record contract entailed.

Billy McCarthy’s Beat Me Til I’m Famous follows the career of a third-tier (or fourth-tier, depending on your criteria) hair metal band called D’Molls. McCarthy was the band’s drummer, and he went by the name Billy Dior. The book offers a blow-by-blow description of what it was like to be in a hometown band (or bands), and finagle your way out of the to make in big in mid/late 1980s

McCarthy joined the D’Molls in the mid-'80s in , and they soon moved to to vie for a recording contract with hundreds of other bands. By the time they signed to Atlantic Records, the public’s appetite for guys with big hair and makeup who sang about sluts was fading. And, of course, there were the usual management and record company screw-ups that added to the band's bad fortune.

The side characters in Beat Me Til I’m Famous are often as interesting as the main players. There’s Rodney’ Dangerfield’s songwriter son, Brian, various shady record company people, managers, groupies, professional rock star girlfriends, sneaky, cutthroat band members, drug dealers, and pushy hangers-on. In fame-hungry , there was always someone willing to give a band money and a place to crash, and hope to get a piece of the action if the band made it.

Beat Me Til I’m Famous captures the sleazy minutiae of the hair metal era with an intelligence and self-awareness you wouldn’t expect to find from someone in that scene.

In 2011, McCarthy sued Poison over authorship of "Talk Dirty to Me" and some other songs. The D’Molls Wiki entry says the lawsuit was settled with McCarthy receiving an “undeclared sum”, but this is the only mention I’ve found online about any settlement. (McCarthy played in a band called Screamin’ Mimis with C.C. Deville  in 1984.)