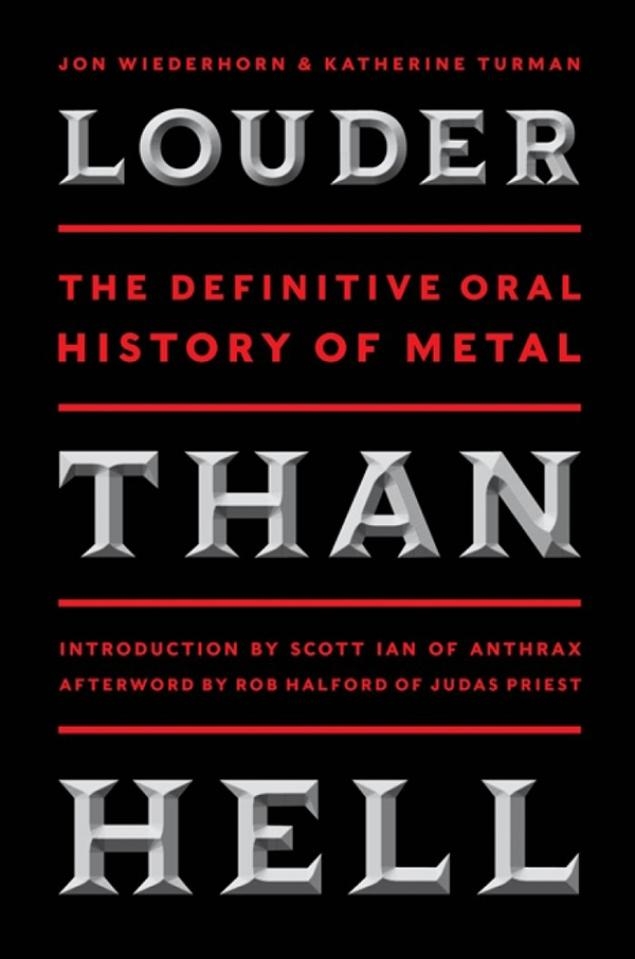 Louder Than Hell is the ultimate heavy metal reference book, as told through the musicians themselves, plus assorted managers, journalists, roadies, groupies and hangers-on. Divided into thirteen chapters that cover all metal genres including proto-metal (Stooges, Blue, Cheer, Steppenwolf), New Wave of British Heavy Metal (Ironmaiden, Def Leppard, etc.), mainstream “hair” metal, thrash metal, death metal,  black metal and even industrial, which is often left out of journalism on the subject.

Compiled from over 400 interviews and other research conducted by veteran rock journalists Jon Wiederhorn (senior writer for metal mag Revolver) and Katherine Turman, producer of Alice Cooper’s Nights with Alice Cooper, syndicated radio show, Louder Than Hell is a first-hand account of the good, bad and ugly of heavy metal history.

Everything’s here, from tales of the lean days eating Ramen and working telemarketing jobs to the drug and alcohol addictions that almost ended bands - and lives.

All the sex, drugs, alcohol, infighting, and violence are included in detail. So you get to hear everything you’ve always wanted to know (and even some TMI stuff) from the participants themselves.

Here’s just a sample of some of the revelations:

-The proto-metal chapter examines the origin of the phrase "heavy metal" as applied to music. In Chapter 2 Masters of Reality, we find out the great lengths Black Sabbath's Tony Iommi went to create fake fingertips so he could continue playing the guitar after several of his fingertips were chopped off in a factory accident.

-Sweet Connie (of Grand Funk’s “It’s an American Band” fame) is a trip. “I’ve blown Geddy Lee and Alex Lifeson," she says, "but I have not had Neil Peart. That I regret, but Peart doesn’t give it up very easily.”

- Did Ozzy really bite the head off a dove? What really happened to the chicken a fan threw onstage at an Alice Cooper concert? Ozzy and Alice reveal the truth behind these notorious events.

- Pussy passes did exist. They’re not an urban legend. (Said passes were issued to girls who serviced the road crew and/or others in order to get backstage).

Once the happy-go-lucky hedonism of hair metal waned, violence and the occult took top billing in the metal scene. The post ‘80s genres are full of brutal stories, including the murder of black metal musician Euronymous by Count Grishnakh, another Norwegian black metal musician, various deaths and disfigurements in the mosh pits and the addition of raw meat as a stage show prop (Type O-Negative, Deicide). This is not to say thrash and crossover/hardcore bands didn’t have groupies. Evan Seinfeld showed Gene Simmons his groupie porn photo album and Gene’s face was “somewhere between shock, disbelief, envy and disgust all at the same time.”

Those tidbits barely scratch the surface. Louder than Hell is required reading for metal fans.