Book Review: A Fast Ride Out of Here: Confessions of Rock’s Most Dangerous Man by Pete Way (With Paul Rees) 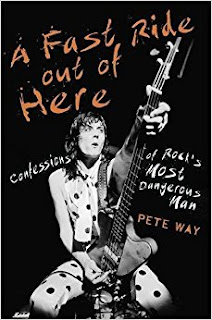 Twisted Sister’s Dee Snider once referred to as a "rock 'n' roll version of Dudley Moore's 'Arthur'.”  The reference to Dudley Moore’s perpetually soused but lovable millionaire character in the 1981 movie is certainly understandable.  Way, UFO's former bassist, certainly imbibed more than his share of alcohol back in the day, and he's a personable and easy-going guy, but.. rich? - well, maybe - til he spent all the money on drugs.

Way’s autobiography A Fast Ride Out of Here: Confessions of Rock’s Most Dangerous Man, co-written with Paul Rees, certainly has all the alcohol, drugs and sex you’d expect from a rock star bio, but without the artifice or self-importance. It has dissenting opinions from cohorts including Michael Schenker, Joe Elliot, Ross Halfin, Geddy Lee and Way’s brother, Neill.

Unlike many English rockers born in the middle of the 20th Century, Way actually had a fairly pleasant childhood. He did well on his exams, but once the late‘60s rolled around, drugs, were everywhere. (He first used heroin at 13, a few years before getting into music.)

Pete met Phil Mogg at 16, and they started the band that eventually became the blues-based version of UFO. Once guitarist Michael Schenker joined, the band developed a harder rock sound and broke into the American market.

Way had a manic onstage persona during his UFO heyday, and would zip back and forth with his bass like a true showman. It’s no surprise that he influenced Nikki Sixx and Ironmaiden’s Steve Harris.

A Fast Ride Out of Here is sprinkled with anecdotes about life on the road. Tales of hot and cold running drugs, alcohol, groupies and in-fighting (mainly guitarist vs. singer) abound.

Of the girls that pursued the band, he writes, “The girls got what they wanted , too….they reasoned that the best way to know someone famous was to be involved with a guy in a band.”

Another anecdote from the UFO days - Pete appeared on the rock ‘n’ roll edition of the TV game show “Hollywood Squares” in 1979 with Todd Rundgren, Chaka Khan and other music stars of the time. He was billed as “Mr. UFO.”

Schenker bailed after the breakthrough Strangers in the Night live album was released. Eventually, Way left to start a new band, Fastway, but never played in the band due to contractual obligations with Chrysalis.

Way formed another band, Waysted, in 1983. Ex-UFO bandmates Paul Chapman and Paul Raymond made brief appearances with the band, and Way worked with Schenker on a few projects in the '00s. Like a codependent couple, Way reunited with singer Phil Mogg in UFO many times (and as Mogg/Way in the late ‘90s). The last split, in 2007, appears to be permanent.

Pete traveled with Ozzy when Waysted toured with him, and joined him in search of “waffle dust”, among other adventures. That’s just one sample of the hilarity that ensued on that tour. Way was also a friend of Bon Scott, and hung out with him a just a little over a week before he died.

Way’s substance abuse also contributed to problems in his personal life. Two wives died of drug overdoses, and he was estranged from his daughters, Charlotte and Zowie, for years. The chapter about his time in , with his fourth wife JoAnna is more surreal tragedy than rock excess. It proves, once again, that truth is stranger than fiction.

At 66, Way has beat heroin, prostate cancer and a heart attack. He’s been working on a solo album, "Walking on the Edge", with producer Mike Clink, between health crises.

A Fast Ride Out of Here will have you laughing one minute, and shaking your head in disbelief the next. Way comes off as such an endearing character, you’ll genuinely like the guy, regardless of his foibles. Funny, heartbreaking and honest, any fan of classic rock or metal will enjoy this book.
Posted by JadeB at 8:37 PM 1 comment: